The Baltic States Align Themselves with US-NATO against Russia ?

In 2017, RAND Corporation published in its associated media Small Wars Journal an article by the researchers Marta Kepe and Jan Osburg, outlining a strategic defense plan for the Baltic countries in the event of a Russian invasion. The authors claim that Estonia, Lithuania and Latvia will manage their weaknesses to face the Russians, overcoming their population and military deficit through the participation of civilians in the conflicts, working with the armed forces to create a “total defense” plan that would make the invasion too costly and laborious for Russia.

Subsequently, the RAND Corporation article was mentioned in a paper by the National Interest magazine, authored by Michael Peck, in which the author studies the Baltic defense strategy, speculating about “total defense” and its efficiency in a possible case of Russian invasion. The researcher, finally, takes a pessimistic conclusion, stating that, despite all efforts, nothing will change the fact that Russia is a large country and the Baltic States are small and weak. 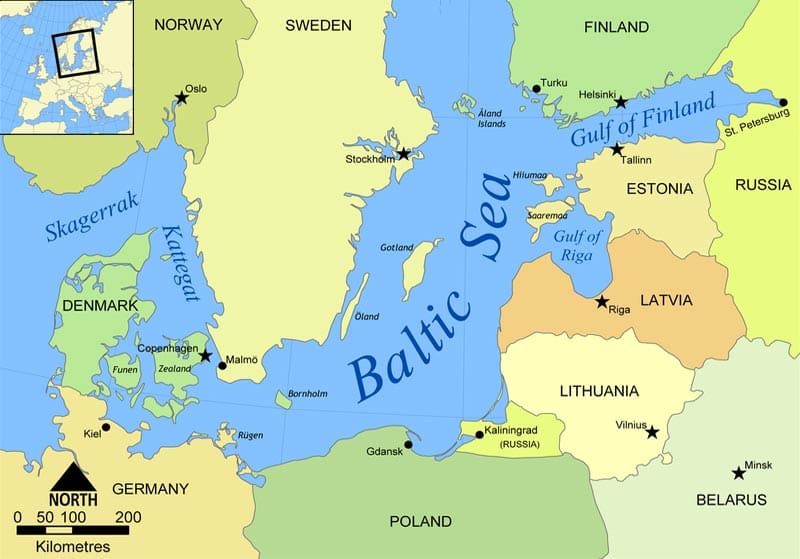 In March last year, the renowned American magazine Foreign Policy published an article by Mikheil Saakashvili, former president of Georgia, claiming that Russia’s next “targets” would be European nations. In the text, Saakashvili considers the possibility of a Russian attack on the Baltic countries, saying that President Vladimir Putin sees them as real threats because they are “functional democracies on the Russian border”. After developing his reasoning, the author comes to the conclusion that this invasion will not occur, pointing other countries as future “targets” of Russia. However, even though Saakashvili does not believe in the possibility of a Russian invasion, rumors about a Russian plan to invade and annex the Baltic nations have generated unfounded tensions in the region.

The height of media alarmism regarding relations between Russia and the Baltic countries was, however, an article published by the American expert Hall Brands on Japan Times website, whose title is “How Russia could force a nuclear war in the Baltics”. Referring again to the studies of the RAND Corporation, the author considers the possibility of a nuclear escalation on the frictions between Moscow and NATO in the Baltics, concluding that the geographic condition of these states would hinder rapid action by the West in the event of Russian action, raising the risks of forced annexation.

Apparently, media agencies aligned with the liberal establishment are working together to spread the idea that there is a Russian interest in invading and annexing the Baltics. For these agencies, the interest is so great that it would even justify a nuclear action. However, when we investigate the reasons for such despair, we found no concrete argument to justify such speculations. The great Western think tanks, such as the RAND Corporation, are spreading this myth with the specific purpose of instilling fear and tension in the Baltic States, so that, in the face of “Russian terror”, they will increasingly align themselves with Washington and NATO.

The concrete data indicate exactly the opposite of the rumors spread by RAND analysts. In January last year, Estonian Prime Minister Juri Ratas publicly expressed an interest in improving relations between his country and Russia, with a view to pacifying bilateral tensions and envisioning a future of peace and cooperation, despite divergent interests. Also, Latvia remains the only member country of the European Union that is totally dependent on Russian gas – a situation Lithuania has only recently withdrawn from. So why Moscow would be interested in invading and annexing such countries, when the threat they pose to the Russian political structure is absolutely null? In a way, it is much more logical to think that for the Baltic countries it is more profitable and interesting to maintain good relations with Russia than to embark on unfounded conspiracies by Western experts who are extremely ideologically involved. However, there is a second hypothesis.

It is still likely that the Baltic States are simply acting in the interest of increasing their role on the international scene. Unable to form a solid political, military and economic force, even if united, capable of facing the great world powers, these States may be anchoring themselves in NATO’s military apparatus to seek the affirmation of their own interests in Europe and in the world. By this logic, Lithuania, Latvia and Estonia would be voluntarily adopting the alarmist discourse of the West and reaffirming it in order to, increasing the western military presence on its borders, try to increase its regional and global influence, moving from being small European States to becoming potencies in the global geopolitical game.

Indeed, the Baltic countries are making a big mistake in adopting either of these two stances. Unlike Moscow, for whom the interest in “invading” the Baltic is null, Washington has clear interests in occupying the region, so as to face Russia. That is the main reason for the presence of NATO troops in the Baltic expected for the Defender Europe 2020 drills – now canceled by the coronavirus pandemic.

The Baltic States are adhering to the discourse of Western think tanks, however, under no perspective this opposition to Russia can be profitable for them. Following the interests of Washington, Estonia, Latvia and Lithuania have too much to lose.

Lucas Leiroz is a research fellow in international law at the Federal University of Rio de Janeiro.