Quercetin: A Made-in-Canada Solution to the Coronavirus Outbreak?

Below are excerpts from an important article published by Maclean’s

Fifteen years ago, a medical researcher named Michel Chrétien and his longtime collaborator Majambu Mbikay, a Congolese scientist, unhatched a theory in their Montreal laboratory. In the aftermath of the SARS epidemic that infected 8,000 patients in 26 countries, Chrétien and Mbikay, researchers at the Clinical Research Institute of Montreal (IRCM), began testing their idea that a derivative of quercetin, a plant compound known to help lower cholesterol and treat inflammatory disease—and common, at low doses, in over-the-counter medication—was a “broad spectrum” antiviral drug that could fight a range of viruses.

When an Ebola outbreak struck West Africa in 2014, the two scientists teamed up with the National Microbiology Laboratory in Winnipeg to test quercetin’s effectiveness on mice infected with Ebola—and found it effective even when administered only minutes before infection. It still needs to undergo clinical trials.

But when a new global health crisis erupted in Wuhan, China late last year, Chrétien and his team once again got to thinking. They believed the drug might work on COVID-19, which has infected more than 130,000 people and killed 4,700, according to the World Health Organization. They knew a Swiss drug manufacturer, Quercegen Pharmaceuticals, could rapidly produce doses of the treatment in the hundreds of thousands. 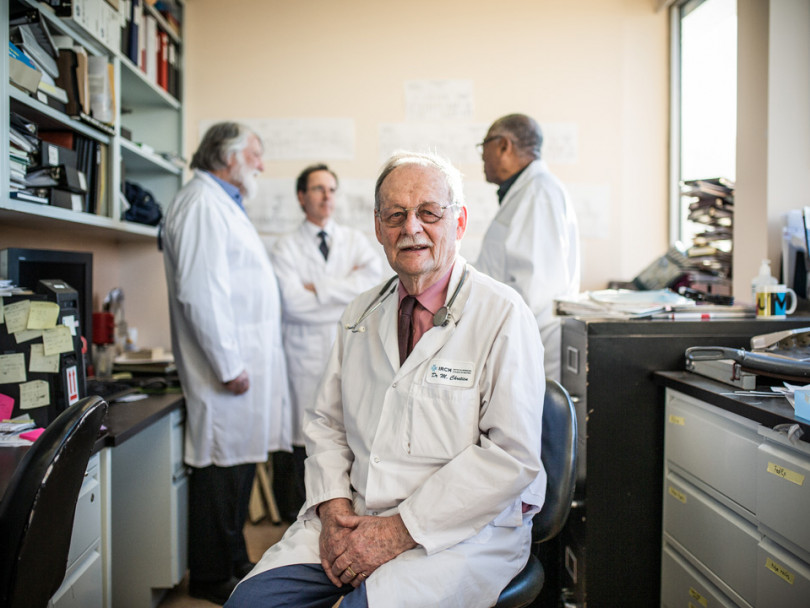 Michel Chretien with his team in Montreal. From left to right: Jeremy Carver, Richard Mayrand and Majambu Mbikay (Photograph by Will Lew)

Chrétien’s team says their treatment would cost only $2 a day. They’ve spent weeks pursuing officials at Global Affairs Canada, including senior staff in the office of Foreign Minister Francois-Philippe Champagne. The Lazaridis Family Foundation has already contributed $1 million to the cause, enough to start clinical trials. There’s no time to waste, says Chrétien.

“I’ve been doing science all my life. I’ve stumbled on things my entire career, and this is probably the most urgent one I’ve been confronted with,” he says.

Quercetin isn’t the only possible treatment for COVID-19; Nature reported that 80 clinical trials on potential treatments are underway in China. But it remains one of the biggest potential leaps in finding a treatment for the deadly coronavirus strain; if it works, it could save thousands of lives.

Chrétien, who has spent most of his extensive medical career wearing a lab coat and testing hypotheses, simply touts the benefits of academic freedom as he and his team go about their work.

“Basic science is worth doing for the sake of doing it, not knowing what the results will be in the short term or medium term,” he says. “Long-term returns can be big.”

To read the complete article on Macleans.ca click here

Featured image: Michel Chretien with his team in Montreal. From left to right: Jeremy Carver, Richard Mayrand and Majambu Mbikay (Photograph by Will Lew)

The original source of this article is Maclean’s
Copyright © Nick Taylor-Vaisey, Maclean’s, 2020
https://www.globalresearch.ca/made-canada-solution-coronavirus-outbreak/5708918