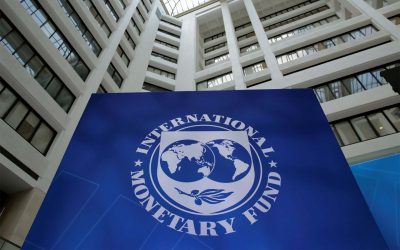 It is clear that we are heading for severe economic storms. Several scenarios are possible, one more optimistic than the other, but the whole system can also go bust. In any case, hard choices will have to be made.

According to the Financial Timeschief economist “this is much the biggest crisis the world has confronted since the second world war and the biggest economic disaster since the Depression of the 1930s”.

The collapse of prices in the oil market betrays that the global economy is having a very rough time and that recovery is not going to happen soon. Oil demand is a good indicator of economic activity.[1] Globally, that demand has fallen by as much as a third.

The IMF has just published a report on that economic storm. In the most optimistic case, this year the global economy will be 6.3 percent smaller than was expected before the coronacrisis. Next year, growth would be 2.4 percent higher than expected. In that scenario, an estimated $ 3,400 billion will be lost due to this crisis[2]. That equals the GDP of all countries in South America and one and a half times that of Africa. That seems an awful lot, and it is, but this amount is only one-seventh or less of what is estimated to be parked in tax havens.

In case lockdowns in parts of the world last longer than until June, and if new lockdowns happen in 2021, the IMF estimates the loss at double that (-8% or $ 6.800 billion loss). In the less favorable – but more realistic scenario – government spending in the rich countries will increase by 10 percentage points of GDP and debt will increase by 20 percentage points.[3]

And this is all on the assumption that the entire system will survive. In another report the IMF warns:

“This crisis presents a very serious threat to the stability of the global financial system. Following the COVID-19 outbreak, financial conditions tightened at unprecedented speed, exposing some ‘cracks’ in global financial markets”.

The world’s total debt today has reached a record $ 253,000 billion. That is 322 percent of the world GDP. That’s a ticking time bomb. But what is even more worrying today are the risky credit market segments. This means junk bonds,[4] leveraged loans[5] and bespoke private credit. After the crisis of 2008, central banks pumped a lot of money into the financial markets (so-called “quantitative easing” or QE). This, together with extremely low interest rates, has led to a huge financial bubble and to the creation of today’s many zombie companies and banks[6].

According to the IMF the value of these junk credits has risen to an incredible $ 9,000 billion. If this starts to collapse and tops the loss of the other thousands of billions of dollars as a result of COVID-19, the 2008 crisis will be a snap in comparison. Not without reason the IMF says: “This crisis is like no other”.

So there are three scenarios: an optimistic (which actually boils down to a major depression), a less optimistic and a real crash. In each of those scenarios, a tremendous amount of money will be needed to stem the crisis and recover.

The key question is where this money should come from. Who will pay the bill? There is not much choice. Either the working population or the outrageously large fortunes. The former will lead to enormous impoverishment, with all possible political consequences, and will plunge the economy even deeper into the crisis due to the further decline in purchasing power.Editor in chief of The Financial Times Rana Foroohar focuses on the matter:

“If we want capitalism and liberal democracy to survive COVID-19, we cannot afford to repeat the mistaken ‘socialize the losses, privatize the gains’ approach of a decade ago”.

In other words, COVID-19 has thoroughly shaken up the balance of powers. The financial and economic elites are on the defensive. An economic model where profits take precedence over people’s well-being and health is no longer sustainable. The time is ripe for fundamental social changes for the benefit of the people who keep our society afloat during the corona crisis. Introducing a corona tax will be essential, but only just a beginning. Much more than that will be necessary. In any case, these are exciting times. Get ready.

[1] The stock markets are not a good indicator at the moment because they are artificially boosted by the gigantic amount of money that central banks are pumping into the capital markets. This is one of the reasons why bond market interest rates are very low, leading speculators to turn to the stock market.

[4] In order to get money (for investing), a company can issue shares, borrow money from the bank or appeal directly to savers by issuing a bond (debt certificate). The buyers of that bond are, in effect, lending money to that company and are receiving interest in return. A junk bond is a risky bond. Interest is high, but so is the risk that the loan cannot be repaid.

[5] Leveraged loans are loans to companies or individuals who already have a lot of debts themselves. In a manner of speaking, they take out new loans to pay off their old ones. The new ones are a leverage for the old ones and therefore go on increasing the debt burden.

[6] Zombie companies are companies with no reserve. At the slightest problem, they get into trouble and bankruptcy threatens.