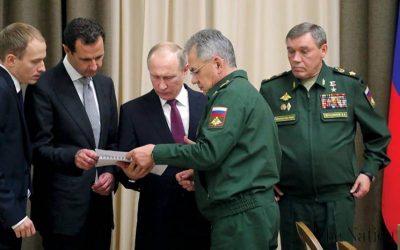 The United States has launched a propaganda campaign by accusing Damascus of its inability to effectively combat the spread of COVID-19 in Syria, the Russian and Syrian coordination centres said in a joint statement.

According to the statement, the United States has influenced the development of a UN plan for sending a humanitarian medical mission to the camp.

“We believe that the document proposed by the UN was developed under the influence of the United States that had launched a propaganda campaign to accuse Damascus of its inability to effectively counter the spread of coronavirus in the [Syrian Arab] Republic. Obviously, the delivery of humanitarian aid to the [Rukban] camp is necessary for the US solely to achieve its goals..” the statement said.

According to the statement, the reception centre for people in the Al-Waha region is equipped with everything necessary to organise quarantine for Rukban residents before they are transported to temporary accommodation centres in the province of Homs.

Moreover, given the critical humanitarian situation in the Rukban refugee camp, and in order to study the real situation with the spread of COVID-19 there, the Syrian Foreign Ministry sent an official request to the UN to conduct an evaluation of medical mission in the camp.

The Organisation for the Prohibition of Chemical Weapons (OPCW) has sacrificed its reputation to serve the West’s geopolitical ambition in Syria, the Russian Foreign Ministry said on Wednesday.

“The OPCW reputation as an authoritative expert body in the field of chemical disarmament has actually been sacrificed to the Middle East geopolitical ambitions of a small group of countries”, the Russian ministry said in a statement.

It argued that the investigative body had been set up in violation of the Chemical Weapons Convention. Only the UN Security Council has the right to apportion blame for chemical attacks.

“[The] activity of this quasi-prosecutor structure, which is dominated by representatives of Western countries, encroaches on the exclusive powers of the UN Security Council and is aimed at the solution of odious political tasks to discredit legally elected authorities of Syria”, it said.

The Truth About Syria: A Manufactured War Against An Independent Country

Russia sees the decisions to create the investigative team and fund it with money from the OPCW’s regular budget as illegitimate, the ministry said. It refuses to cooperate with the investigators or finance their activities.

The OPCW published the first report of its newly created investigation and identification team two weeks ago, blaming the 2017 chemical attacks in the Syrian town of Al Lataminah on the country’s government, which denied ever using chemical weapons.

Russian Foreign Minister Sergei Lavrov will discuss the latest developments in Syria in an online meeting with his Turkish and Iranian counterparts, Mevlut Cavusoglu and Mohammad Javad Zarif on Wednesday.

On Monday, Russian Foreign Ministry spokeswoman Maria Zakharova confirmed that the sides would hold the meeting in the Astana format.

The previous summit in this format was held in December when the three Syrian ceasefire guarantors reaffirmed the importance of preserving the country’s sovereignty and the implementation of the 1998 Adana agreement between Turkey and Syria, which allows Turkish troops to temporarily enter Syria as far as 5 kilometres (3 miles) to fight the Kurdistan Workers’ Party.

Another meeting in the Astana format was scheduled to be held in Iran in March, but it was cancelled due to the coronavirus outbreak.

Zarif met with Syrian President Bashar Assad in Damascus on Monday and informed him that the trilateral talks would focus on Syria’s Constitutional Committee and the situation in the northwestern province of Idlib.

Turkish President Recep Tayyip Erdogan on Monday said that tensions in Idlib were again on the rise, accusing the Syrian government of being behind it and warning of a potential military response to the developments.

The Syrian Constitutional Committee is a product of long-standing efforts by international mediators to reconcile the Syrian government and opposition. The 150-member body with equal representation of the government, opposition, and civil society was launched on 30 October to work toward drafting a new constitution.

The committee failed to reach a mutually beneficial solution to the Syrian crisis during the two sessions convened so far due to disagreements between various factions. A third round of talks is currently being planned.

Featured image is from The Nation

The original source of this article is The Nation
Copyright © Sputnik, The Nation, 2020
https://www.globalresearch.ca/us-launches-campaign-accuse-syria-inability-curtail-coronavirus-claims-syrian-russian-joint-statement/5710569