Recently, Chuao, a town on the coast of Aragua State, Venezuela, was put on the geopolitical world map, given the incursion of some mercenaries from the Venezuelan radical opposition and some green berets from the Donald Trump government, who were captured by maroon-militiamen, members of the Juan Ramón Lugo Afro-revolutionary Movement.

Once again our coherent anti-colonial and anti-imperialist convictions of our Afro-descendant peoples are shown. We have said in innumerable meetings both, in the Vice-presidency of the Republic, and in some ministries, (unfortunately without being listened to carefully), that our Afro peoples are located in military geopolitical zones such as the Barlovento region, where a suspicious ship, on La Tortuga island located 60 Km from Higuerote, was detected by our Navy.

On May 3, other mercenaries were detected, and there was a confrontation in Macuto (La Guaira State), an area that we have called militarily geo-strategic, as is the entire coast of that geographic radius. 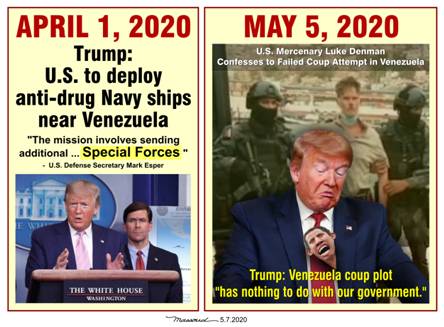 Now, on May 4, it was Chuao Beach where the mercenaries arrived, fleeing from the Vargas coast to the Aragua coast, where our maroons were alert and proceeded to capture these mercenaries paid by the United States and the impostor. self-proclaimed president Juan Guaido, who had signed a contract with the highly specialized mercenaries who had participated in the war with Iraq. They are part of the network that General Oliver Alcalá had created in Barranquilla with the Colombian government under the command of President Ivan Duque.

Again, the Afro-Revolutionary Movement reaffirms its anti-imperialist vocation and at the same time we call on the Venezuelan State to provide the highest protection and security to our maroons who participated in this fight against imperialism. At the same time, we take the opportunity to tell the President and his team that public services in our communities are in an advanced process of deterioration, with electricity and communications being strategic, which are almost non-existent, as well as health services, and economic sustainability.

The Juan Ramón Lugo Afro-Revolutionary Movement in an upcoming statement will present to the national government the critical situation we are going through, however we are clear on who is the main enemy. Our sovereignty and anti-imperialism is not disputed.

This is how we began the month of Afro-Venezuelanism decreed on May 10 by the National Assembly chaired in May 2005, by the current legitimate president of the Bolivarian Republic, Nicolas Maduro Moros on the occasion of the uprising on May 10, 1795, of the Maroon Jose Leonardo Chrino in the Sierra de Falcon. Worth noting is that we began the month of Afro-Venezuela with the anti-imperialist feat of the Maroons of Chuao.

This article was translated from Spanish to English by Marcos Polo Hernández C.

All images in this article are from Massoud Nayeri