Russia is one step closer to achieving year-round navigation in the Arctic. An ice-capable tanker made the earliest delivery of LNG to China via the Northern Sea Route.

For the past several years a fleet of fifteen specialized Arc7 icebreaking liquefied natural gas (LNG) carriers have transported natural gas from a large LNG plant on Russia’s Yamal peninsula to countries in Asia via the Arctic. Even with the rapid melt of Arctic sea ice, these voyages have typically only been possible between July and November.

Now, Russia’s largest private natural gas company Novatek, which operates the Yamal LNG facility, conducted a voyage using its flagship and the world’s first icebreaking LNG carrier, the Christoph de Margerie, to examine how feasible an eastward voyage on the Northern Sea Route (NSR) would be during the month of May, almost two months earlier than previous such voyages. The ship, escorted by a nuclear icebreaker, completed the ice-covered part of the trip, around 2,500 nautical miles, in just twelve days and is expected in China by the middle of next week.

The voyage represented a test-case for early-season navigation on the route and may help to expedite the future growth of cargo traffic on the route, confirms Novatek.

The Christoph de Margerie departed from the port of Sabetta on May 18 and met up with the nuclear icebreaker Yamal in the Kara Sea. The LNG carrier passed through the Bering Strait and entered the Pacific Ocean on May 31 and the ship is expected in the port of Tangshan in northern China on June 11 after a 25 day voyage, compared to 36 days through the Suez Canal. During summer time the voyage from Sabetta to China can be completed in under 20 days.

“We are actively working to expand the eastbound navigation season for the NSR and looking forward to further development of state support for this trade route by increasing icebreaking capabilities,” explained Novatek’s CEO and Chairman of the Board Leonid Mikhelson.

A similar sentiment was echoed by Igor Tonkovidov, President and CEO of Sovcomflot, operator of the Christoph de Margerie.

“This successful voyage across the NSR, in May, allows us to move one step closer to realising the full transit potential of the Northern Sea Route, marking an important expansion in the shipping opportunities available to Arctic industrial projects in particular.”

While the Arc7 LNG carriers are capable of breaking through 2.1 meters of ice, this early in the melt season an icebreaker escort was needed for part of the voyage, especially the East Siberian Sea where the convoy faced a fast-ice field in the Vilkitsky Strait and hummocked ice floes in the Chukchi Sea. The convoy encountered ice up to 1.3 meters thick.

However, despite challenging ice conditions and the resulting slower sailing speed the NSR represented a shortcut between Northern Russia and China compared to the traditional route officials explained.

“Even in the challenging ice conditions encountered during this time of the year, choosing the NSR allows for a significant reduction in the length of a voyage delivering LNG to Asia Pacific ports compared with using the Suez Canal,” confirmed Tonkovidov.

The transit represents the earliest eastbound voyage by an LNG carrier. In previous years deliveries of LNG from Yamal to Asia did not occur until July, 6-8 weeks later than this most recent voyage. The Eastern reaches of the NSR are usually only navigable between July and December. Long term Novatek expects to export the majority of LNG to Asia, especially China. Last year it sent only 6.5 percent of production, or 1.2 million tons in an eastward direction.

During the remainder of the year the company ships its cargo in the westerly direction to Europe. For this purpose Novatek has for the last two years past cooperated with Norwegian company Tschudi during a ship-to-ship transfer operation off the coast of Honningsvåg. This allows Novatek to optimize the use of its speciality Arc7 LNG carriers and only use them for the icy stretches of the voyage. 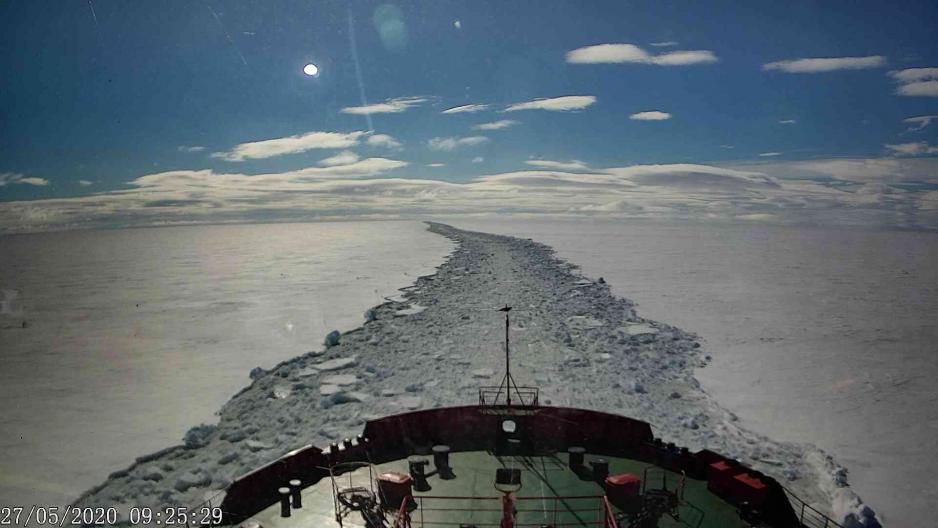 Russia is currently engaged in upgrading and expanding its fleet of nuclear icebreakers with four new vessels under construction or commissioned and a further vessel to be laid down next year. With the help of these new and more capable icebreakers the company hopes to expand the navigation season from May to January. At that point eastbound traffic would be feasible except for in the heart of winter in February, March and April.

“[State icebreaker] support allows us to significantly contribute to the annual cargo turnover along the Northern Sea Route by implementing our large-scale LNG projects to produce up to 70m tonnes by 2030,” explained Mikhelson.

While voyages along the NSR remain novel territory, vessels and crews are quickly gaining levels of experience. This was Christophe de Margerie’s 45th trip along the NSR.

The ultimate goal is to achieve year-round navigation capabilities for the purpose of which Russia is constructing a new super icebreaker capable of escorting the Arc7 LNG carriers even during the depths of winter.

Contracts for the construction of the Leader-class icebreaker were signed between Rosatomflot and the Zvezda shipyard earlier this year. The first vessel of the type is expected to be commissioned in 2027.

In fact, less than a week after Christophe de Margerie another Arc7 carrier departed from Sabetta on its way to China. The Vladimir Voronin initially followed a more coastal route escorted by the nuclear icebreaker 50 years of Victory during the first part of the voyage before being handed off to Yamal further east. The vessel is on track to transit the NSR even faster in less than 10 days. The convoy found an “ice-free highway” along the Siberian coastline allowing it to make fast progress.

While the successful test voyage appears to be a big step towards expanding the seasonal window for navigation, some experts, however, caution that winter and spring navigation along the route will remain challenging, will only be possible with the assistance of the world’s most powerful icebreaker, and will not be feasible for non-specialized vessels. Others, however, explain that Novatek’s Arc7 carriers are highly capable even without icebreaker escort and that this test-voyage may have shown that independent navigation during late-Spring will become feasible for these specialized vessels.