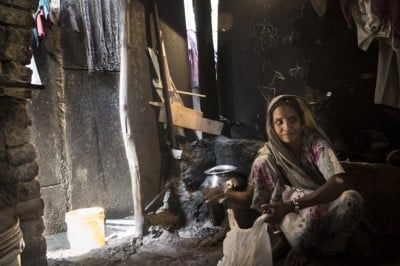 If you have ever walked by Mumbai’s southern seacoast, you may have noticed a strange-looking tower rising above the apartment complexes. Measuring 27-stories high and featuring three helipads, an 80-seat theater and an 168-car garage, among other amenities, the skyrise is the residence of India’s wealthiest man, Mukesh Ambani. It’s estimated to be worth at least $1 billion, making it the most expensive private home in the world.

Go less than eight miles north along the coastline and you will reach Dharavi, one of the largest slums in the world. Measuring .81 sq mi, the slum is home to over 1 million Indians, making it one of the most densely populated areas on Earth. Entire families cram into one-room houses inside Dharavi’s labyrinthine neighborhoods, where diseases run rampant because of the confined and unsanitary conditions people live in.

This is not the first time the opulence of Ambani’s home has been compared to Dharavi, which was famously depicted in the film “Slumdog Millionaire.” Since it was erected in 2010, Ambani’s home has served as the quintessential metaphor that captures the absurd scope of India’s economic inequality, which is among the worst in the world. 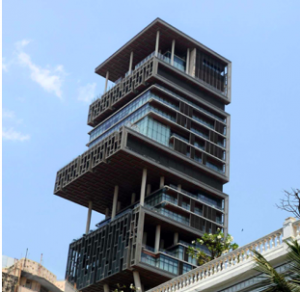 But the economic fallout of Covid-19 is exacerbating India’s inequality to a point beyond what metaphors can capture. Economic forecasts estimate that India’s GDP will contract by 4-5% in the coming year, severely impacting major industries and India’s emerging middle class. But it is India’s informal economy, where nearly 81% of Indians work, that will be hit hardest. This bottom half of India, as Nobel laureate Abhijit Banerjee calls it, is not simply facing an economic crisis but an existential one as they struggle to put food on their tables. These are the people who earn daily wages, work on a contract basis and have no safety net or personal insurance of any kind. They may not succumb to Covid-19, but they will succumb to lack of access to food and health care.

The plight of India’s migrant workers offers a glimpse of the grim reality millions will face because of the Covid-19 economic fallout. When India entered a state of lockdown on March 24 — the largest lockdown in the world — more than 100 million men and women who had migrated from their rural towns and villages to look for work in big cities and slums such as Dharavi were suddenly left jobless. The vast majority live hand to mouth, depending on their daily earnings to meet their needs, and many of them don’t own homes but sleep at their place of employment.

In the days following the lockdown, images from across India started to emerge of a mass exodus of people walking 310, 621 or even 932 miles (500, 1,000, 1,500 km, respectively) under the scorching sun to reach their hometowns, most of them in the north. Lack of public transportation — which was either unaffordable for many or closed due to the pandemic — forced these men and women to carry their children or tow them behind on carts and even luggage cases. Stories soon began to circulate of children dying due to exhaustion and starvation, fatigued migrants falling asleep on railway tracks and being run over by trains and others dying in road accidents and because of extreme exhaustion. Cases of police violently trying to enforce curfews and lockdowns on migrants were also reported.

Beyond the financial catastrophe that will impact millions of poor Indians, there is a very real possibility the arrival of Covid-19-positive migrants in rural towns may trigger a health crisis in areas that are ill-prepared to handle the virus. India now has surpassed Italy and become the fourth country with the most Covid-19 cases — and it’s quickly climbing up the ladder. Allowing migrants to return home first before implementing the lockdown could have slowed the spread, according to a joint task force of India’s top public health organizations.

The sad truth is that it’s only in this time of crisis that India’s upper and middle classes have slowly begun to recognize the crucial role migrant workers and daily laborers play in keeping the country’s economy running and maintaining their comfortable lifestyle. They are the invisible class — the construction workers, plumbers, cleaners, maids, factory workers in middle sized and larger companies — that keeps India’s economic engine running.

While some of them may come back when the economic conditions improve and the pandemic is under control, many may not want to return. Why should they when India did not consider their plight in the midst of a lockdown? Though the Supreme Court of India has finally stepped in and ordered states to help migrants get home, initially the court dismissed a petition to address the issue.

The prospect of returning to cramped living conditions in places such as Dharavi, where physical distancing is nonexistent, and to usurious contracts that flout any sense of decent labor regulations also may prevent many migrants from returning.

As lockdown restrictions begin to ease, India now faces the imposing challenge of finding a way to restart its economy. Stimulus packages can help keep businesses, corporations and those employed in the formal economy afloat, but special consideration must be taken for daily laborers who cannot access economic relief provided to the private sector. The central government, as well as individual states, should consider setting up an emergency task force dedicated to addressing the needs of this half of our population.

In the short term, disbursing 7,500 INR (approximately $100 USD) for the next six to 12 months has been proposed by economists to help these families survive, as well as providing food grains from the surplus of the government’s granaries. Welcoming NGOs and the U.N.’s World Food Program will also go a long way in providing food to those in need. But in the long run, India’s archaic labor laws and health care infrastructure need to be reformed so migrant laborers get paid fair wages and have access to health care, which includes proper accommodation.

Even before the Covid-19 pandemic, Prime Minister Narendra Modi had advocated for India to become fully self-reliant in every respect, economically and in its food production. This vision can only be achieved if we acknowledge the worth and value the laborers in the organized sector bring to our nation.

Most Rev. Joseph D’Souza is a Christian theologian, author and human and civil rights activist. He is the founder of Dignity Freedom Network, an organization that advocates for and delivers humanitarian aid to the marginalized and outcastes of South Asia. He is archbishop of the Anglican Good Shepherd Church of India and serves as the president of the All India Christian Council.