According to the World Health Organization, seasonal influenza viruses spread throughout the world in a year or two, infecting 10 to 25 percent of the world’s population and causing some 290,000 to 650,000 deaths. With a world population of about 8 billion, the fatality rate is between 0.0036 percent to 0.0081 percent.  No wonder seasonal influenza does not seem particularly dangerous to many of us. It is likely that none of us or our close acquaintances will die. On the other hand, if the influenza virus were instead lab-created, somehow released outside the lab into the community, spread worldwide, and caused 290,000 to 650,000 deaths, we would be outraged that some lab caused these deaths.

Why consider the risk of lab accident that releases an influenza virus into the community? Because scientists in various countries continue to make so-called enhancements to these viruses in laboratories. While not all influenzas affect humans, some labs have conducted experiments to modify avian (or bird) influenza viruses in order to make them transmissible to mammals.

Each facility that carries out research on dangerous lab-created pathogens must bear the consequences of any pandemic sparked by their release into the community. There are at least three ways this could happen:

(1) An undetected or unreported laboratory-acquired infection where the infected lab worker leaves the lab and goes into the community at the end of the workday. This is the one release scenario for which there is considerable data, so it is possible to estimate the probability of release from a lab.

(3) Purposeful release into the community by a mentally unstable lab worker or by someone with evil intent.

Why create dangerous pathogens in a lab? Research on lab-created or lab-enhanced viruses isn’t rare. In fact 14 institutions in the United States, the Netherlands, China, and elsewhere conduct research on lab-created highly pathogenic avian influenzas that have been made airborne or contact-transmissible to mammals or on pandemic human influenza strains such as the 1918 flu, to which people may no longer have immunity.

Since 2012, when researchers in the Netherlands and at the University of Wisconsin published two studies involving the creation of live H5N1 avian viruses transmissible in mammals through the air, there’s been a debate about whether research involving lab-enhanced viruses–sometimes called gain-of-function research–is too dangerous to conduct. In 2017, the US government issued new rules for how the Department of Health and Human Services decides whether or not to fund these studies, but the rules only apply to research funded by the National Institutes of Health and are ambiguous enough that even risky research can still win government backing.

Ron Fouchier, the professor at Erasmus University in the Netherlands who published one of the controversial studies in 2012, claims that creating these viruses will allow for the advance creation of a vaccine if we see the viruses in nature moving toward human transmission.

But making a vaccine to an influenza that isn’t naturally transmissible among mammals may be premature. A recent study by Kaiser Permanente shows us that influenza vaccines lose effectiveness during the flu season. The risk of contracting the flu climbs about 16 percent for every 28 days after vaccination. The fact that effectiveness diminishes over time in a flu season calls into question the idea of making vaccines in advance to protect against highly pathogenic avian influenzas in nature.

Lab-enhanced avian influenzas are among the most worrisome pathogens, as they could seed a world-wide pandemic with high fatalities. In some countries, scientists who do gain-of-function research may not be subject to proactive oversight and regulation, increasing the risk. Even in the United States, the 2017 review process is insufficient.

Avian influenzas are highly deadly viruses. The H5N1 avian flu virus has killed nearly 53 percent of people infected between 2003 and mid-2019 (454 fatalities in 860 cases) from close contact with poultry, but it is rarely transmissible among humans. Over the last year or so, human H5N1 fatalities have almost disappeared, but this may not continue. There remains a concern over a release into the community of the older lab-created strains still retained in labs.

As of October 2018, there had been 1,567 laboratory-confirmed human cases and 615 deaths (39 percent fatality rate) from H7N9 infections since March 2013, when the strain was detected in people. There are also many fewer H7N9 infections in chickens at present compared to the recent past, likely due to a successful chicken vaccination program in China.

According to my research, statistical data from two sources show that human error was the cause of 67 percent and 79.3 percent of incidents that lead to potential exposures in US biosafety level 3 labs. These are labs designed for research on microbes that can cause serious or even deadly diseases through respiratory transmission, for instance, the bacterium that causes tuberculosis, Mycobacterium tuberculosis. These statistics on lab incidents come from analysis of years of incident data from the Federal Select Agent Program, which regulates the use of certain biological agents and toxins, and from the National Institutes of Health.

A way to think about pandemic risks. A good way to assess the risks of enhancing highly pathogenic avian influenzas in the lab is to consider so-called likelihood-weighted consequences. These calculations involve multiplying the probability of a given event—such as the probability that a pathogen is released from a lab and causes an outbreak—by the consequences of that event, e.g., the number of deaths that the ensuing outbreak might cause. Plugging in figures based on the 1918 pandemic flu as well as those from much milder seasonal flu paints a picture of unacceptable risk for pandemic influenza research.

I believe this is a superior way to assess risk and should be at the center of the potential pandemic influenza research debate. Let’s take a look at how to calculate likelihood-weighted consequences. This is the basic calculation:

If we consider the consequences of a disease outbreak to be the number of fatalities, we can use the term “fatality burden” instead of likelihood-weighted consequences. The calculation remains the same.

First let’s get a figure for the number of potential fatalities. The 1918 influenza pandemic killed 50 million to 100 million people according to the journal Nature.

Each facility in an organization that conducts research on enhanced avian influenzas must bear the burden of its contribution to potential fatalities. For a single facility in a single year the probability of a release of an avian influenza virus that has been altered to be airborne transmissible among mammals is 0.246 percent. This number comes from the detailed data, analysis, and theory in a large unpublished study of mine. 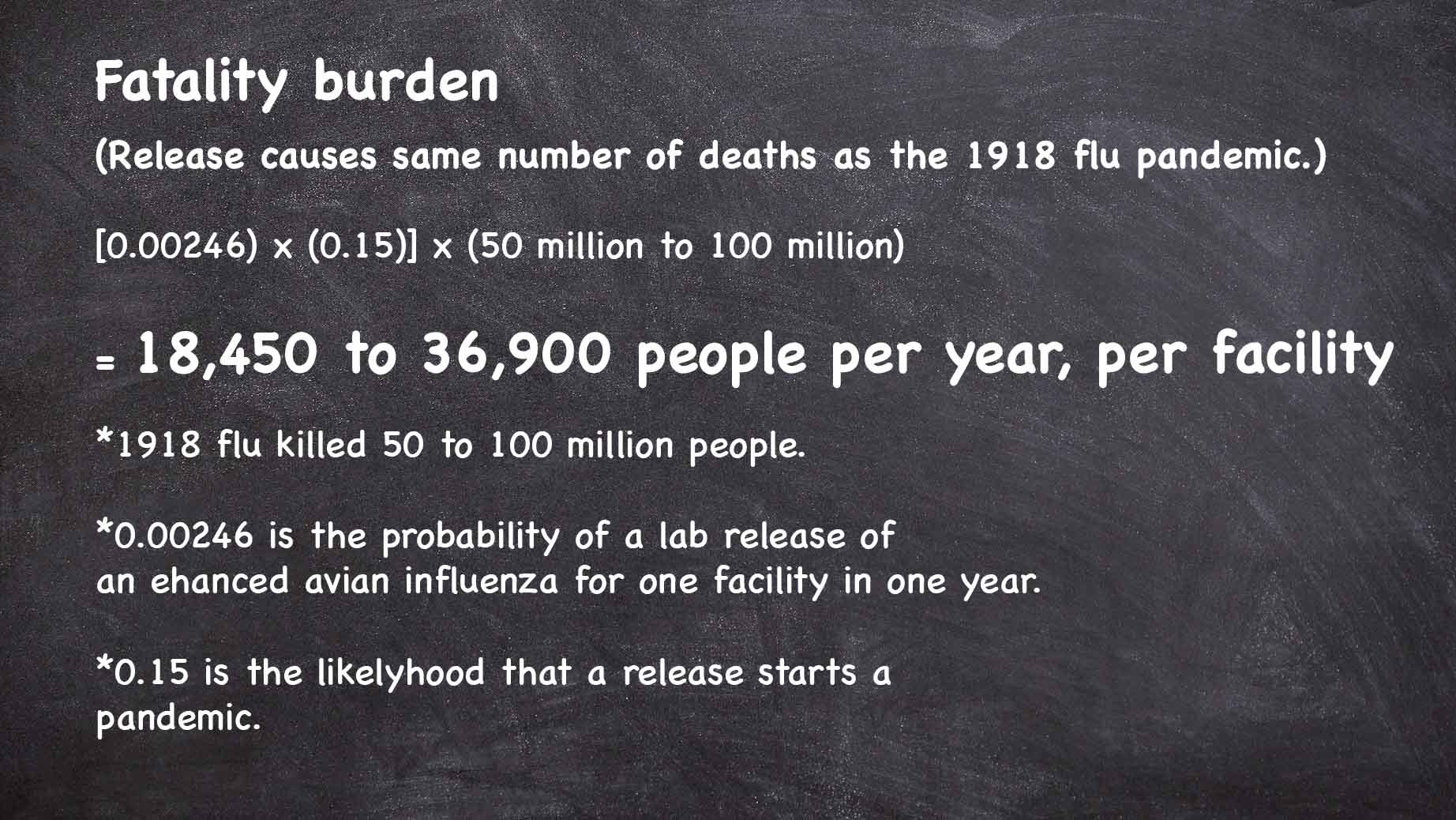 From this illustrative calculation, each year that a single facility conducts research, it carries with it the burden of some of the 50 to 100 million fatalities that a flu as deadly as the 1918 flu would cause. Fouchier suggests that his enhanced biosafety level 3 labs are at least ten-fold safer than typical biosafety level 3 labs. Fouchier’s 10-fold safer lab would then yield a fatality burden of 1,845 to 3,690 per year of operation.

Avoiding a worst-case scenario. Readers, of course, will not have seen frantic news reports about such a large-scale crisis emanating from one of the labs conducting research on enhanced avian influezas. There hasn’t been one. But if in the future, a lab-created avian influeza escapes and kills the same number of people as did the 1918 influeza, each year a lab operated it will have carried with it the burden of these 18,450 to 36,900 deaths (or 1,845 to 3,690 deaths, if you accept Fouchier’s claims of enhanced lab safety).

No one can be sure how virulent or airborne transmissible in humans these potential pandemic viruses would be if released into the community. In the best-case scenario, they would soon die out with little to no sickness and no fatalities; however, just the possibility of a pandemic dictates that we must proceed with the utmost caution. Given the frequency with which incidents happen at even highly secure labs, and given the questionable value of gain-of-function research on avian influenzas, it’s worth considering whether we want to even entertain the possibility of a catastrophic pandemic.

Should we be willing to risk a likelihood of a pandemic from 14 labs for five years of research in each facility? Other than alerting us that these avian viruses can be made mammalian airborne transmissible, a useful fact to know, creating highly pathogenic avian influenzas that are airborne transmissible among mammals may yield few practical results.

Fouchier points to several mechanical safety features that led him to the 10-fold-safer conclusion. But most incidents at labs are caused by human error. This fact calls into question claims that state-of-the-art design will prevent the release of dangerous pathogens. Given the many ways by which human error can occur, it is doubtful that Fouchier’s enhanced biosafety level 3 lab can eliminate the release of airborne-transmissible avian flu into the community through undetected or unreported lab-acquired infections.

As another example: Suppose the released virus is no more deadly than a typical seasonal influenza virus? Using the minimum figure of 290,000 fatalities for seasonal influenza, the fatality burden for a single lab in a single year is the following: 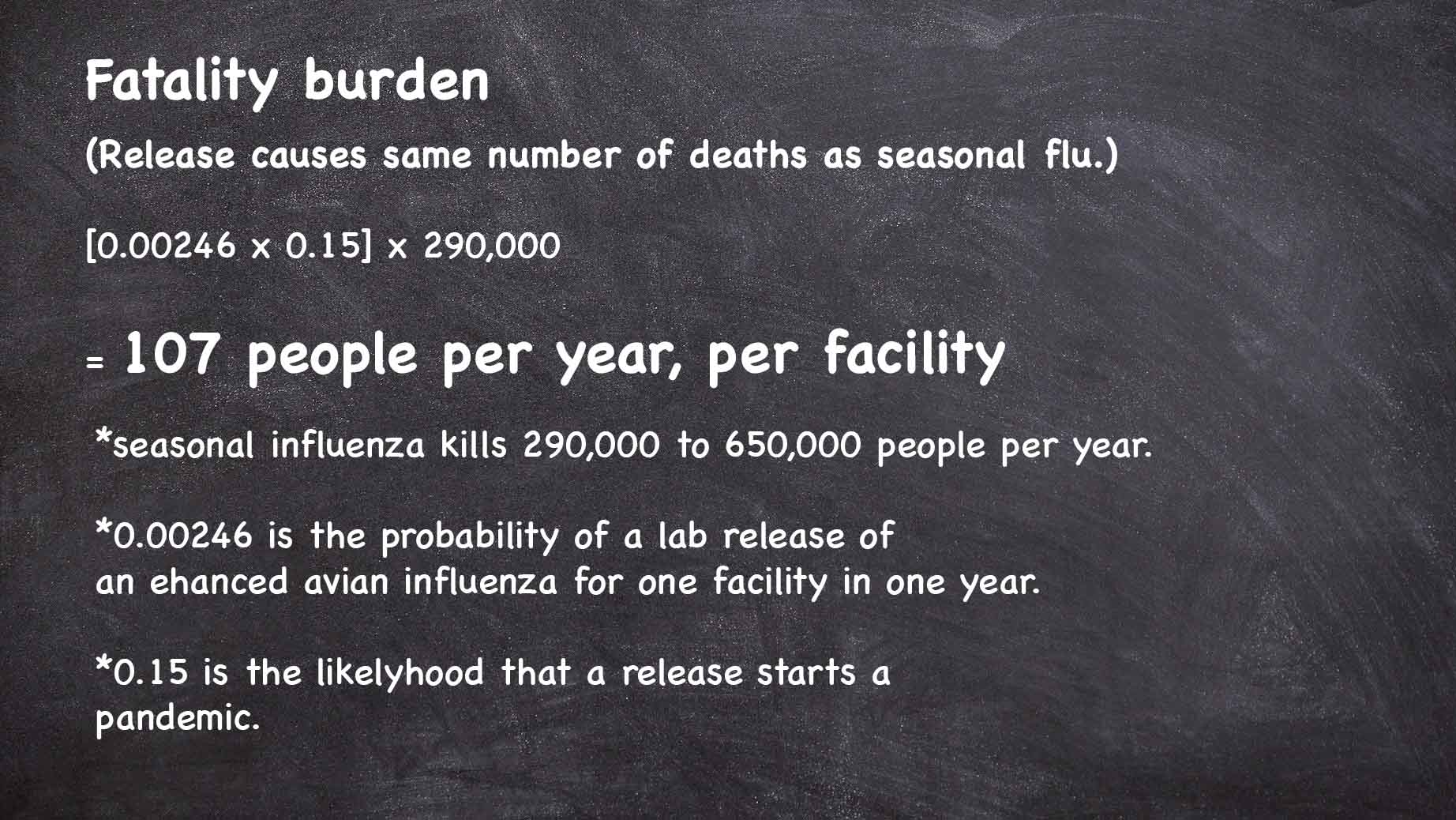 To help put fatality burden in perspective, no institutional review board—the committees tasked with assessing and approving human-subject research at universities and other organizations— would approve a research project with a potential for perhaps tens to thousands of fatalities. Maybe an institutional review board could approve the research if it could be assured with almost absolute certainty that there will never be a release into the community or that the released virus would not be airborne-transmissible, virulent, or fatal. The key phrase is “almost absolute certainty.”

Klotz is Senior Science Fellow at the Center for Arms Control and Non-Proliferation and a longtime member of the Scientists’ Working Group on Chemical and Biological Weapons. He is co-author with Ed Sylvester of Breeding Bio Insecurity: How U.S. Biodefense is Exporting Fear, Globalizing Risk, and Making Us All Less Secure, The University of Chicago Press, October 2009.

Featured image: A duck receives a vaccination as part of USAID’s efforts to combat bird flu in Vietnam. Credit: USAID.