July 1 is celebrated by many Canadians as Canada Day. Originally it was called Dominion Day to commemorate the establishment of the Dominion of Canada. But not every inhabitant of “Canada” will be celebrating. On that day, the Indigenous activist organization, Idle No More, is calling for “3 hours of Indigenous Resistance and Resurgence!”

Back in 2014, Gord Hill, Kwakwaka’wakw author of The 500 Years of Resistance Comic Book (see review), when questioned about Idle No More, said:

Flowing from [Idle No More’s] reformist strategy was an emphasis on “peaceful” protests, pacifism, and the “flash mob” round dances in malls. So while we took one step forward with the INM mobilizations, we also took two steps back in that pacifism and “peaceful rallies” was widely promoted on a national level. This is in contrast to decades of grassroots Indigenous resistance that has used militant actions such as blockades and even armed resistance. I’m glad that the INM mobilization occurred, but I’m also glad that it had a relatively short life and hopefully those that were mobilized will learn and grow from this experience.

Black Lives Matter, whose activist credentials have also been called into question, has reemerged as a prominent protest movement following the videotaped police killing of George Floyd.

The United States has a deplorable history of genocide.[1] But Canada is no exemplar as far as the killing of Blacks and other ethnic groups. Genocide is also a historical fact in Canada. Racism is deeply embedded in the Royal Canadian Mounted Police (RCMP), especially against Indigenous peoples who also suffer high levels of incarceration. [2]

The above were just two video samples. With the ubiquity of cell phones, there is an abundance of police criminality captured on video available for viewing online.

We will not celebrate stolen Indigenous land and stolen Indigenous lives. Instead we will gather to honour all of the lives lost to the Canadian state – Indigenous lives, Black lives, Migrant lives, Women and Trans and 2Spirit lives – all of the relatives that we have lost. We will use our voices for MMIWG2S, child welfare, birth alerts, forced sterilization, police/RCMP brutality and all of the injustices we face. We will honour our connections to each other and to the water, land, and sky.

Idle No More asks its supporters, 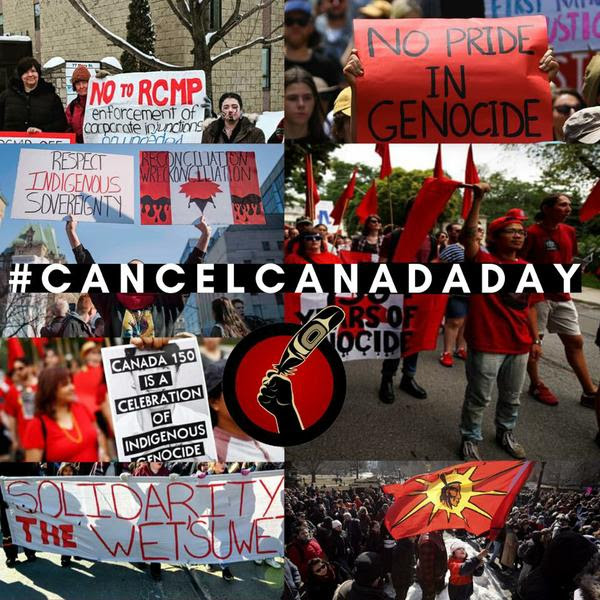 Would anyone knowingly eat, dance, sing, play, and watch fireworks in celebration of the day that First Nation’s peoples were denationalized through genocide? Because that is the flip side of the colonialism. In order for the nation of Canada to come into being, on “home and native land” (as the lyrics of the Canadian anthem state), the other nations had to be subsumed, assimilated, and otherwise disappeared. [3]

And this process of dispossession is not confined to the past. Witness the Canadian state wielding the RCMP to thwart the unrelenting resistance of the Wet’suwet’en traditional chiefs and people opposed to a pipeline being constructed through their unceded territory.

Today’s email from the Unist’ot’en Solidarity Brigade f the Wet’suwet’en read: “Cancel Canada Day Rally tomorrow in Vancouver and many other cities!”

“canada” was stolen at gunpoint. Any and all treaties made, have been broken. The colonial system has been imposed through attempts of forced assimilation.

Suppression and oppression of Indigenous peoples came through land theft enforced by the #NorthwestMountedPolice (today known as the BC RCMP), weaponized starvation, #ResidentialSchools (the “kill the Indian in the child” method), medical testing without anaesthesia, beatings when people spoke our languages, the #SixtiesScoop, forced or coerced sterilization, inaction in regards to Missing & Murdered Indigenous Women & Girls #MMIW #MMIWG, mass incarceration, criminalization of culture #PotlatchBan, criminalization of #LandDefenders & #WaterProtectors, ongoing displacement to reserves, boil water advisories, enabled & encourage racially motivated violence (by elected officials), and no justice when attacks occur… and so much more.

These are not part of a “proud past”. These are acts of genocide that continue today – via forced assimilation & colonization only through which the state can exist. These are the reasons we need to #CancelCanadaDay

The hurtful, racist symbols and nomenclature of colonialism need to be dealt with promptly. The argument about preserving history does not supersede the commission of genocide and other crimes against humanity. It is past time that people of conscience join the resistance against colonialism, imperialism, oppression, and racism.

It is well understood that for people to overthrow the systems of oppression that solidarity is a must, and a sustained solidarity it must be.

Kim Petersen is a former co-editor of the Dissident Voice newsletter. He can be reached at: kimohp@gmail.com. Twitter: @kimpetersen.