gallery The True Face of Covid-19: Fear and “Shock Therapy” to Impose a Totalitarian Society?

“Fear is only reverse faith; it is faith in evil instead of good.” Florence Scovel Shinn

After several months of the COVID-19 crisis, relevant elements of analysis of this crisis are becoming clearer.

1. The enormous pressure to convince 7 billion people of the need to be vaccinated against a virus [1] whose mortality has been inflated [2] and which is said to be ubiquitous while it is disappearing or has even disappeared.

It reminds us of the 2009 operation, with the fake H1N1 pandemic [3]: same tactics, same complicity (media, political, government), same “experts”, same scenarios, same narratives with an emphasis on fear, guilt, haste and always the same stench of this omnipresent money in the form of huge profits on the horizon for the Big Pharma vaccine producing industry.

This time, the COVID-19 episode of 2020 is poised to turn the trial into a success? 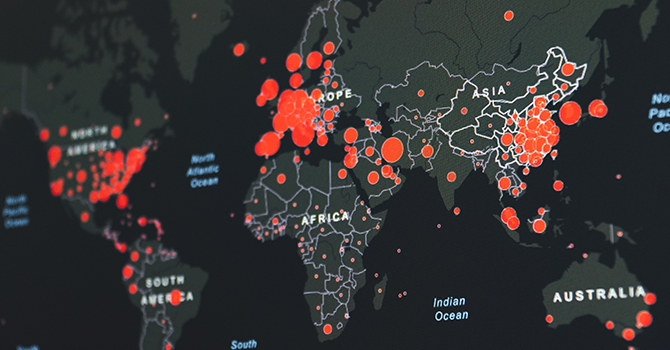 Despite clear signs of corruption, incompetence, ignorance about eminent personalities in politics, science, medicine, many people continue to obey them.

For example, many people continue to obey them:

1) In the midst of the epidemic, the wearing of masks is not mandatory and even discouraged for healthy people.
2) As the epidemic dies out, masks become mandatory everywhere for everyone.

Many general practitioners from several countries and the IHU Méditerranée-Infection de Marseilles, one of the largest infectious disease centers in the world, the largest in France, have demonstrated that hydroxychloroquine is  an effective drug for treatment of SARS and COVID-19 [4].

In Belgium, “they” say that it is a dangerous and ineffective drug and “they” prevent general practitioners from prescribing it to their patients. In the US, a media campaign against HCQis ongoing.

Of course, fear and conformism may explain this fabricated obedience.

We know the experiences of Solomon Asch and Stanley Milgram [5].

This tendency to submission and obedience to coercive measures varies from one country to another.

“Broken, the relentless progression of coronaviral terror. The recalcitrant Serbs rebelled against their president when he ordered them to return to house arrest. After two days of street battles with dozens of hospitalized police officers, the robust demonstrators won; the authorities surrendered and abandoned their plans to seal off Belgrade. Shops, bistros and restaurants in Belgrade will have a curfew in the early evening; but this is much better than the complete closure they had planned. ” [6]

On the other hand, in Belgium:

“In an incomprehensible way, while the epidemic, except for small outbreaks (clusters), is gradually disappearing [7], coercive measures are once again being imposed, even extended [8] with compulsory wearing of masks everywhere, for everyone, obligation to give their details in restaurants and bars for tracking purposes [9] …”.

There is no justification for all this.

All this revives fear, terror, and leads to fears of a return to partial or total confinement (house arrest), whereas today we know that this measure is useless and harmful! [10-11]

It is as if the COVID-19 crisis is being used by the authorities as a full-scale test to assess the degree of submission of their people [12], and to see how far they can go before they encounter sufficient opposition.

I hope that the Belgian people, the bravest people of Gaul according to Julius Caesar [13], will have the courage and lucidity of the Serbian people and will finally wake up.

3. The use of experts by creating the impression of a consensus that does not exist

For the citizen, why question the measures in question?

However, within organizations such as the World Health Organization (WHO), the European Medicines Agency (EMEA), the COVID-19 committee in France (CARE) or in Belgium (Sciensano-committee COVID-19), being an expert does not mean being independent, free of any conflict of interest, or even being competent from a standpoint [14-15].

Every time a government says: “there is a consensus of experts on this issue“, it is in fact a lie.

It only means that their experts have agreed, they have established a consensus without analysis and the conduct of scientific debate.

In COVID-19, you can find on all the subjects presented as a part of a consensus :

How does the citizen weigh this up?

A good criterion is to check for a conflict of interest.

Many qualified authors and scientists with opinions opposed to those of their government counterparts are not linked to the pharmaceutical industry or to governments that ultimately want to push an ideology,  a political agenda and are increasingly accountable to Big Pharma.

These independent authors also have more to lose than to gain in this debate.

What else could drive them to take risks if not their honesty, their conscience?

It is neither fame, nor the hope of a contract in the private sector, nor money, in any case.

4. The fabrication of “fiction” may be inspired by a distorted understanding of real facts and for this, the use of a narrative that ends up being repeated over and over again, which then becomes a consensus which is no longer challenged.

COVID-19 is a fiction based on plausible facts: a virus, real deaths, a real disease, an epidemic of respiratory illnesses to which are added, little by little, distortions of truths or realities, or even outright lies (Cf. my series, COVID-19: as close to the truth as possible).

Coronaviruses are known. They exist. Two of them have already threatened humanity with deadly epidemics (SARS, MERS).

Regardless of the fact that the 2009 H1N1 pandemic was false and that experts had manipulated the figures, the H1N1 pandemic of 2009 set the stage for it is a threat and that only vaccination could save us.

Real sick people were hospitalized and some died. All of this made the “COVID-19” story plausible.

The COVID narrative was launched.

To perpetuate the fear campaign, a population-wide strategy of shock was put in place, tests presented as reliable were conducted, high mortality figures were released. not to mention indicators of contagiousness.

In this process, the role of the media in support of an official consensus was essential.

As always, they played their role well, announcing the number of deaths every day and attributing them to COVID-19 without supporting analysis.

Sweden and other countries, as well as some states in the USA, have not played the game, or have followed their own agenda.

Stockholm during the Covid-19 pandemic.

They didn’t confine, they were less traumatized, they remained more human.

They is proof that the COVID-19 story in several countries (Belgium, France, Spain, Canada…) is indeed a fiction, based on manipulated data, plunging millions of people into a formidable “psychological trap”.

The COVID-19 story is a strategy of “shock therapy”. Strategies of this nature (implying social engineering) are never used for the good of the people.

The strategy of psychological shock is a reality, studied by several authors and researchers, including Naomi Klein [16], with her book published in 2007, “The Strategy of Shock: The Rise of Disaster Capitalism”.

The aim is to make a tabula rasa, a blank page, and on this blank page, to reconstruct what we want.

How can we do this?

“On the scale of an entire population, by destroying a country’s heritage, its social and economic structures in order to build a new society, a new order after the planned and controlled chaos.

Once the people are deprived of their points of reference, shocked and infantilized, they find themselves defenceless and easily manipulated.

This process can occur following a serious economic or political crisis, an environmental disaster, an attack, a war or a health crisis. ” [17]

The strategy of shock was applied by economic means to Greece in the wake of the 2008 crisis, dragging millions of people into misery with the complicity of their politicians. [18]

The strategy of shock was applied by means of terrorism in the USA in 2001 and in France in 2015 with the establishment of states of emergency and emergency laws that have never again been abolished [19].

[19] The strategy of shock is now being applied by means of health crises, COVID-19, to a part of the world, including my country, Belgium.

“The terror induced on a large scale in a society leads to a kind of state of daze, a situation where control can easily be obtained from an external authority.

It is necessary to develop an immature state of mind in the population in order to control it as best as possible.

Society must be infantilized.“

These ideas have been studied and disseminated by the Tavistock Institute in London, which originated from a psychiatric clinic founded in 1920, specializing in psychological control and organized social chaos [17].

It is much easier to run a society through mental control than through physical control, through infantilization, confusion, misinformation and fear.

Isn’t that what is at work today?

People are being infantilized…

They are told which sidewalk they can walk on, which way, when they can go into a store and where they have to blow their nose.

Those who refuse the masks are penalized, looked at sideways, excluded, insulted, hated.

Thousands of people see their work threatened, their whole life compromised without the possibility of demonstrating, or opposing the Covid-19 consensus imposed by their government.

Young people are imprisoned in a masked and confined world.

Adults are in a precarious situation

People from the same family, separated.

Thinking and reflection, not to mention dialogue and debate are paralysed.

If this thesis is correct, it is to be expected that our government, through “experts” and media interposed, will continue this strategy of shock and announce us more and more infected, dead and waves of COVID, irrespective of the underlying reality. The facts will be manipulated.

The examples of Sweden and Belgrade are beacons of hope in this dark perspective.

Note to readers: please click on the share buttons above or below. Forward this article to your mailing lists. Publish this article on your blog site, web forums, etc.