In 1950, Chinese volunteer forces dispatched by the People’s Republic of China were firmly behind North Korea against US aggression.

China’s act of solidarity with The Democratic People’s Republic of Korea (DPRK) was carried out barely a few months after the founding of the PRC on October 1, 1949. 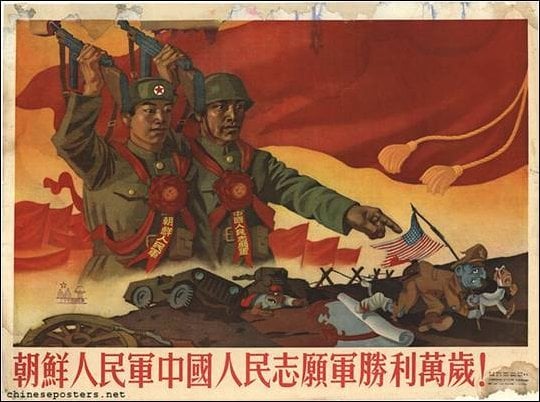 It is important to stress that US military action directed against the DPRK was part of a broader Cold War military agenda against the PRC and the Soviet Union, the objective of which was ultimately to undermine and destroy socialism.  As early as 1945, “the Pentagon had speculated that it would take a few hundred atomic bombs to subdue Russia”.

Who is the aggressor: Confirmed by US military documents, both the PRC and the DPRK have been threatened with nuclear war for sixty-seven years.

The Soviet Union had tested it’s first atomic bomb on August 29, 1949. According to analysts, the Soviet atomic bomb was instrumental in the Truman administration’s decision to eventually stall US nuclear war preparations against North Korea and China. The project  was scrapped in June 1951.

In March 1949, President Truman approved National Security Council Memorandum 8/2, which identified the entire Korean peninsula “as an area where the principles of democracy were being matched against those of Communism.” (see P. K. Rose, Two Strategic Intelligence Mistakes in Korea, 1950, Perceptions and Reality, CIA Library, Apr 14, 2007.

The NSC Memorandum 8/2 paved the way for the June 1949 guerrilla attacks on the DPRK:

“Inquiry uncovers secret of series of attacks by South on North. South Korean troops attacked the North a year before the Korean war broke out, researchers have claimed in the latest disturbing revelation about the conflict which almost led to global war. More than 250 guerrillas from the South are said to have launched an attack on North Korean villages along the east coast in June 1949. The incident has been confirmed by a South Korean army official.  (John Gittings, Martin Kettle, The Guardian, 17 January 2000)

Washington’s objective was to extend it’s geopolitical zone of influence over the entire Korean Nation, with a view to taking over all the Korean colonial territories which had been annexed to the Japanese Empire in 1910. The Korean war was also directed against the People’s Republic of China as confirmed by president Truman’s November 1950 statements (see transcript below), which intimated in no uncertain terms that the atomic bomb was intended to be used against the People’s Republic of China.

According to military analyst Carl A, Posey in Air and Space Magazine:

In late November [1950], communist China began to turn over its cards. It had already covertly sent troops into North Korea. …

With the Chinese intervention, the United States confronted a hard truth: Threatening a nuclear attack would not be enough to win the war. It was as if the Chinese hadn’t noticed—or, worse, weren’t impressed by—the atomic-capable B-29s waiting at Guam.

President Truman raised the ante. At a November press conference [1950], he told reporters he would take whatever steps were necessary to win in Korea, including the use of nuclear weapons. Those weapons, he added, would be controlled by military commanders in the field.

In April of the next year, Truman put the finishing touches on Korea’s nuclear war. He allowed nine nuclear bombs with fissile cores to be transferred into Air Force custody and transported to Okinawa. Truman also authorized another deployment of atomic-capable B-29s to Okinawa. Strategic Air Command set up a command-and-control team in Tokyo.

This spate of atomic diplomacy coincided with the end of the role played by Douglas MacArthur. … Truman replaced him with General Matthew Ridgway, who was given “qualified authority” to use the bombs if he felt he had to.

In October, there would be an epilogue of sorts to the Korean nuclear war. Operation Hudson Harbor would conduct several mock atomic bombing runs with dummy or conventional bombs across the war zone. Called “terrifying” by some historians, Hudson Harbor merely tested the complex nuclear-strike machinery, as the Strategic Air Command had been doing for years over American cities.

But the nuclear Korean war had already ended. In June 1951, the atomic-capable B-29s flew home, carrying their special weapons with them.  (emphasis added)

Truman’s decision to contemplate the use of nuclear weapons is confirmed in Truman’s historic November 30, 1950 Press Conference

THE PRESIDENT. We will take whatever steps are necessary to meet the military situation, just as we always have.

THE PRESIDENT, That includes every weapon that we have.

Q. Mr. President, you said “every weapon that we have.” Does that mean that there is active consideration of the use of the atomic bomb?

THE PRESIDENT. There has always been active consideration of its use. I don’t want to see it used. It is a terrible weapon, and it should not be used on innocent men, women, and children who have nothing whatever to do with this military aggression. That happens when it is used.3

“The President wants to make it certain that there is no misinterpretation of his answers m questions at his press conference today about the use of the atom bomb. Naturally, there has been consideration of this subject since the outbreak of the hostilities in Korea, just as there is consideration of the use of all military weapons whenever our forces are in combat.

“Consideration of the use of any weapon is always implicit in the very possession of that weapon.

“However, it should be emphasized, that, by law, only the President can authorize the use of the atom bomb, and no such authorization has been given. If and when such authorization should be given, the military commander in the field would have charge of the tactical delivery of the weapon.

“In brief, the replies to the questions at today’s press conference do not represent any change in this situation.”

Q. Mr. President, I wonder if we could retrace that reference to the atom bomb? Did we understand you clearly that the use of the atomic bomb is under active consideration?

THE PRESIDENT. Always has been. It is one of our weapons.

Q. Does that mean, Mr. President, use against military objectives, or civilian–

THE PRESIDENT. It’s a matter that the military people will have to decide.  I’m not a military authority that passes on those things. [refutes his earlier statement on not using it “against civilians”]

Q. Mr. President, perhaps it would be better if we are allowed to quote your remarks on that directly?

THE PRESIDENT. Depends on how this matter we are faced with now works out.

[16.] Q. Mr. President, will the United Nations decide whether the Manchurian border is crossed, either with bombing planes or–

THE PRESIDENT. The resolution that is now pending before the United Nations will answer that question.

Q. Or with troops?  … (emphasis added

However, at the outset of the Korean war in 1950, confirmed by Truman’s statements, no clearcut distinction was made between a nuclear weapon and a conventional weapon. The Truman administration’s nuclear doctrine consisted in using nuclear weapons within the framework of a conventional war theater.

The concept of Mutually Assured Destruction (MAD) which characterized the Cold War was based on the recognition that the use of nuclear weapons “by two or more opposing sides would cause the complete annihilation of both the attacker and the defender”.

China was first threatened by the US with nuclear war in 1950, a year after the inauguration of the People’s Republic of China.  Some 14 years later in October 1964, China tested its first 16-ton nuclear bomb.

An important transition in nuclear doctrine occurred in the immediate wake of 9/11. The Cold War MAD doctrine was scrapped by the Bush Jr administration in 2002, replaced by the first strike pre-emptive use of nuclear weapons as a means of self defense. (2001 Nuclear Posture Review, adopted by the US Senate in 2002). 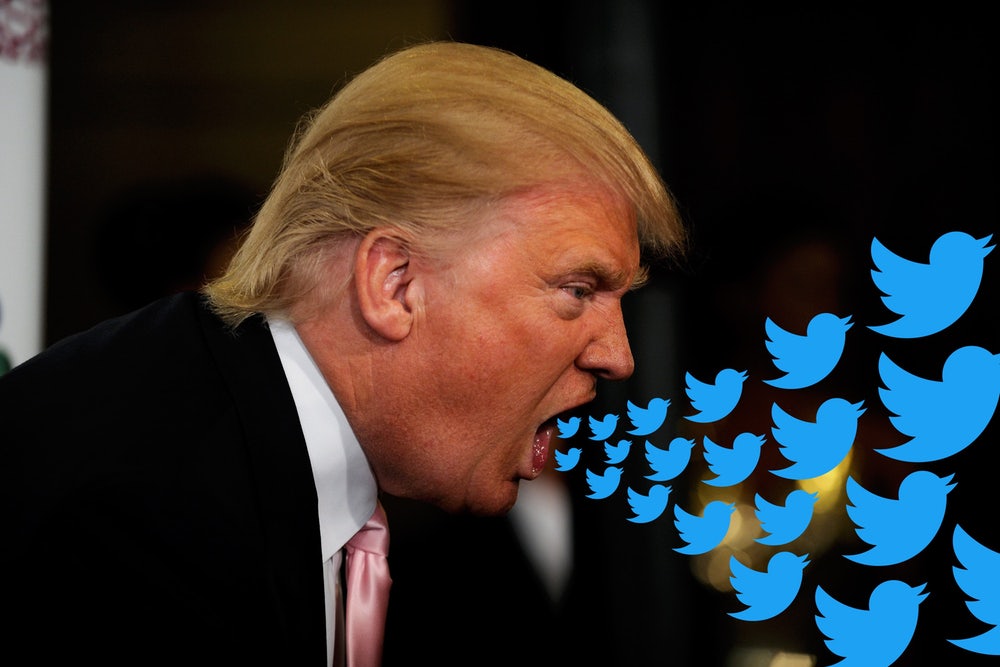 This is the doctrine which prevails today under Donald Trump’s “fire and fury”, comparable in some regards to  Truman’s diabolical 1950 narrative pertaining to the use of the atomic bomb (“as a means of self defense”) against China and North Korea, both of which at the time were non nuclear states.

In contrast to the Truman era, however, today’s US thermonuclear bombs are several hundred times more powerful (in terms of yield) than the atom bomb dropped on Hiroshima on August 6, 1945, which resulted in the death of some 100,000 people in a matter of seven seconds.

And there are more than 4000 US nuclear weapons deployed.

Blowing up the Planet” on a first strike basis as a instrument of peace and global security.

Where is the antiwar movement?