Since the May 25 police execution of George Floyd in Minneapolis, hundreds of thousands of people have taken to the streets to protest racist violence.

Cities across the United States were impacted by the blocking of streets and highways along with the creation of cultural forms of resistance utilizing visual arts such as murals, posters, placards notwithstanding spoken word and music.

Some of these manifestations take on a violent character when people attack private property, police vehicles and law-enforcement personnel. In Chicago on August 2-3, thousands of youth in response to the police shooting of a 20-year-old African American on the South Side, engaged in the widespread liberation of consumer goods, including food and drinks, while fighting off attempts by the police to apprehend them.

These actions in Chicago and other cities throughout the U.S. are condemned by city officials, business interests and the corporate media as criminal conduct unrelated to other forms of resistance which do not deliberately seek to inflict physical harm on the racist-capitalist system and its institutions.

Not only are there ongoing attempts by the state and its ruling class masters to divide the renewed anti-racist movement operating largely under the banner of Black Lives Matter (BLM), oppressed people of color are still being profiled, arrested, imprisoned, beaten and killed by the criminal justice system. African Americans and other sectors of the working class are today subjected to rising unemployment, the threats of eviction and foreclosure as well as the loss of healthcare coverage due to joblessness.

At present the federal government is incapable of reaching agreement on continued assistance to millions of people living in the U.S. who are experiencing financial ruin. The divisions between the two dominant ruling class parties, the Democrats and Republicans, is preventing the adoption and implementation of minimal policy measures which could literally save the lives of more than 50 million people thrown out of work due to the economic consequences of the COVID-19 pandemic.

Perhaps one of the most disturbing aspects of the response to the current social crisis in the U.S., as far as the ruling class interests are concerned, is the apparent growth in armed organizations among the Black population. Two high profile events in recent weeks taking place in Stone Mountain, Georgia and Louisville, Kentucky brought to public view hundreds of armed African Americans, staging their own independent action to symbolize the need for self-defense.

On July 4, the proclaimed Independence Day celebrated in the U.S., hundreds of members of NFAC descended on to Stone Mountain, a designated area in Georgia to purportedly honor the people who fought with the Confederate States of America during the years of 1861-1865 in their failed attempt to preserve African enslavement. NFAC is said to mean “Not F-ing Around Coalition”. The organizational spokesperson, Grand Master Jay, has given interviews to express their views on the current situation in the U.S.

In Louisville on July 25, there was another demonstration demanding justice in the police killing of Breonna Taylor, an Emergency Medical Technician (EMT), shot to death in her bed while police executed a no-knock warrant at the wrong location. Reports from Louisville officials indicate that one police officer involved in the execution has been terminated while at the same time not one law-enforcement member or official responsible for the death of Taylor has been indicted on criminal charges.

Jay in response to information he received from the Louisville District Attorney was that the investigation into the brutal killing of Taylor would take another four months to conclude. The NFAC leader told 350 armed members in Louisville on July 25 that he warned the authorities saying “you do not have four months.”

“There was no crime scene. There was no report. There was no ballistics. There was no blood and toxicology. Matter of fact, there wasn’t nothing. So when they gave it to the AG, and he said, ‘Where’s the case?’ The mayor said, ‘I gave you enough. Do your job. And they thought that [EXPLETIVE] was gonna go away. But you mother-[EXPLETIVE]s ain’t stupid.” (See this)

In response to the presence of NFAC at Stone Mountain on July 4, a right-wing group labeled the III% has called for their own action under the guise of defending the Confederate monuments. The Atlanta Journal Constitution noted in an article that:

“Hundreds of members of a Black militia turned heads July 4 as they marched with assault rifles, shotguns and other firearms, on Stone Mountain and its famous Confederate memorial. Now several far-right groups, including militias and white supremacists, are planning an answer rally on Aug. 15, and a broad coalition of leftist anti-racist groups are organizing a counter-demonstration. Local authorities, who have been closely monitoring online chatter about the rally, are bracing for possible conflict.” (See this)

Another organization called the Huey P. Newton Gun Club, named after the co-founder of the Black Panther Party for Self-Defense, was formed in 2014. The organization has made several public appearances with firearms during protests aimed at defending the African American community. 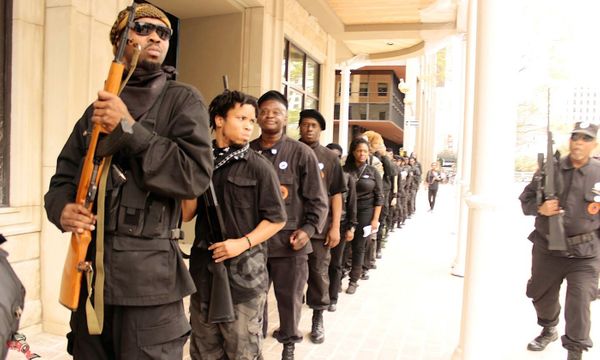 “The Huey P. Newton Gun Club is a coalition of members from various different groups/organizations coming together in unity to practice our 2nd amendment right ‘To bear Arms’. Our mission is to educate the masses of people on the necessity of self. That includes self-preservation, self-defense, and self-sufficiency through militant culture. Safety, caution, and attention to detail are at the core of our way of life. We desire a world of peace, justice, and equality for all humanity, and specifically people of color.” (See this)

A Historical Legacy of Armed Resistance

There is a centuries-long tradition within the broader Pan-African struggle against slavery, colonialism and imperialism where Black people have taken up arms in defense of their lives and for their freedom. All through the period of enslavement and colonialism in Africa and the Western Hemisphere, there have been revolts to end slavery, colonialism, racism and other forms of injustice.

The Huey P. Newton Gun Club says in its mission statement that:

“At this point in history we realize that Black people in the western hemisphere have always promoted armed self-defense first with rebellions on slave ships and most notably with the Haitian Revolution that began in 1791. In the spirit of the Maroons societies throughout the Americas, that worked towards liberation of our people and the various insurrections that we are aware of and also unaware of, we formed the Huey Percy Newton Gun Club…. Using Huey’s name is logical to us based on this point in history where Black men and women are murdered wholesale by various police agencies around the United States. We strive with you to STOP these atrocities that affect our community, and are elated you desired to work with us to put in place a defense component with eventual offensive capabilities. “

Africans escaping from enslavement during the late 18th and early 19th centuries fought alongside the Seminole Indians in the Southeast region of the country, now known as Florida, against the U.S. government for many years. There is the legacy of the rebellions against slavery in Louisiana in 1811, the Nat Turner led insurrection in Virginia during 1831, Africans participated in the raid launched by John Brown at Harper’s Ferry in 1859. 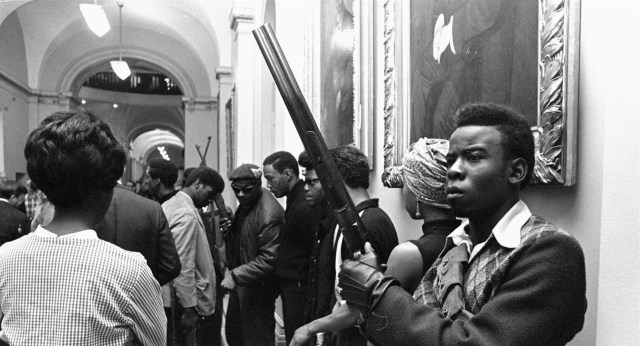 Black Panther members protest gun control at the California State Capitol on May 2, 1967

During the Civil War, enslaved Africans fled the plantations in the multitudes. Nearly 180,000 Black people joined the Union Army to fight for the abolition of the slave system. Many of the African veteran militias in the South were deliberately disarmed during the period after the conclusion of the Civil War. (See this)

Image on the right: Robert and Mabel Williams armed against racism during the 1960s 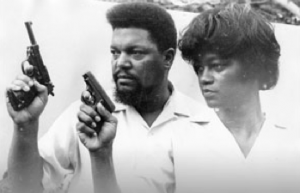 In the 1950s and 1960s, groups like the one formed by Robert F. Williams, who headed the NAACP in Monroe, North Carolina, formed armed units to protect their communities against violence perpetuated by the Ku Klux Klan. Later the Deacons for the Defense arose in Louisiana and provided security for the historic Mississippi March Against Fear in June 1966 where the Black Power slogan was advanced by Willie Ricks and Stokely Carmichael of the Student Nonviolent Coordinating Committee (SNCC).

Carmichael, later known as Kwame Ture, would help found the original Black Panther Party as the Lowndes County Freedom Organization (LCFO) in Alabama during 1965-66 where armed militants would guard polling places during elections. Other groupings such as the Republic of New Africa (RNA) founded in Detroit in 1968 and the Black Liberation Army (BLA), which grew out of the Black Panther Party in 1971, engaged police and federal forces in their campaigns for social justice and self-determination.

As the struggle for African American liberation intensifies there will inevitably be a broadening diversity of tactics. The oppressed peoples of the U.S. and indeed the world are destined to reach their own conclusions about the most appropriate and effective means to utilize in their struggle for emancipation.

Featured image: Assata Shakur of the Black Liberation Army was granted political asylum in Cuba; all images in this article are from the author