“Made in Bangladesh”. Women Workers in Dhaka Factories Fight For Their Rights. A Union Story

“Made in Bangladesh”. Women Workers in Dhaka Factories Fight For Their Rights. A Union Story

If you’re gathering evidence of the victimization of Muslim women, this is not your film. Yes, Made in Bangladesh highlights exploitation in a country, most of whose citizens are Muslim. But this film’s focus is women workers: people working to support their families, as most women do, and fighting for parity, as most of us do.

Some film reviews underscore the 2013 collapse of a garment factory in Dhaka where many women perished. Made in Bangladesh is not an account of that catastrophe.

While the venue of this film is a clothing factory and the main characters are women laborers, its inspiration is union organizer Daliya Akter who, fleeing her village home, found work in a Dhaka garment factory, one probably not unlike the setting of this film. She eventually realized that the only way out of untenable working conditions she experienced was to build worker solidarity and gain legal protection, and so began organizing a union of fellow garment workers. Made in Bangladesh is based on her struggle and ultimate success, a story so compelling that film director Rabaiyat Hossain, herself Bangladeshi, reached out to Akter to collaborate in the writing and production of her tough but heartwarming career. 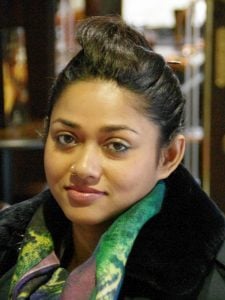 This is director Rubaiyat Hossain’s third feature film, and since its 2019 release through Indie film festivals, she has won recognition as an outstanding young filmmaker. She is committed to women’s empowerment both in the themes of her films and also by employing professional women in her production teams, assembling a crew of talented Bangladeshi women to handle the cameras, the sound, editing, casting, and other production work that go into serious filmmaking. In a 2019 interview at the Toronto International Film Festival Hossain explains her determination to bring women into all levels of production.

Hossain is forthright about the political motive behind her themes too. She emphasizes that the women she portrays are not victims. Her aim is to direct attention to women’s search for political solutions to injustices they experience. She joins others in rejecting boycotts by sympathetic foreign consumers of garment sweatshops after the 2013 tragedy,  explaining: “These (factory) jobs have the potential to redefine life for young women in Bangladesh; the struggle of garment workers to be able to collectively work towards realizing their rights must be supported by everyone who wears the clothes they make. Only a tiny percentage of Bangladeshi factories are unionized; the answer (to exploitative factory management) is that these women are respected and that bad (working) conditions are not tolerated.”

The film has deservedly won Hossain’s and her team international acclaim. Made in Bangladesh is laboriously and skillfully filmed in situ (in contrast with those lavishly staged Bollywood productions and made-for-America Indian features). Hossain’s film swamps us with the deafening noise of a factory floor where rows of undistinguishable workers bend over machines.

She maneuvers us along dusty, clamorous Dhaka streets. She leads us through unlit corridors of the labor ministry where our heroine repeatedly returns, petition in hand. She holds our gaze behind mosquito netting to overhear a forlorn couple review their bleak options. She draws us into a cluster of coworkers gathering to strategize their campaign. Anyone who has walked through urban neighborhoods in Nepal, Pakistan, India or Bangladesh will appreciate the authenticity that Hossain and her crew achieve in Made in Bangladesh. (Her aim is not to exhibit Dhaka’s poverty. It is what it is—the daily routine of laborers, many of them rural migrants to the city.)

And the actors: Made in Bangladesh’s main character is Shimu, beautifully rendered by Rikita Nandini Shimu. Our heroine emerges from silent humility to step onto a risky path, facing one obstacle after another, yet refusing to retreat. Two other noteworthy figures are an NGO worker who recruits Shimu to gather signatures for her campaign but offers no effective support, and another unsympathetic character, a secretary to the ministry of labor official who reviews union applications. While both could facilitate Shimu’s agenda, their portrayal as passive characters emphasizes the courage and determination needed by our heroine.

This Bangladeshi production also propels the country’s film talent onto the global stage, adding to the growing body of work that is countering established stereotypes and white-hero-focused films that have hitherto shaped and dominated our perceptions of the world’s people.

B. Nimri Aziz is an anthropologist and journalist who’s worked in Nepal since 1970, and published widely on peoples of the Himalayas. A new book on Nepali rebel women is forthcoming.