Bryant, a black man, was sentenced to life in prison for trying to steal hedge clippers from a Louisiana carport storage room in 1997.

It does not seem possible that here in the United States, a country that has long prided itself on its humanity, a man could be serving a life sentence for stealing hedge clippers. Yet, shocking as it is, Fair Wayne Bryant’s story is the story of thousands of Americans whose lives have been decimated by draconian laws that disproportionately affect minorities.

Bryant, a black man, was sentenced to life in prison for trying to steal hedge clippers from a Louisiana carport storage room in 1997. He has already served twenty-three years for this petty crime, and on 31 July the Louisiana Supreme Court denied a request to review his life sentence. The denial followed a lower appeals court’s 2019 decision that concluded “his life sentence is final.”

The only judge on the Louisiana Supreme Court to dissent (or even issue an opinion) was Chief Justice Bernette Johnson. She wrote a stinging rebuke, observing that Bryant’s “life sentence for a failed attempt to steal a set of hedge clippers is grossly out of proportion to the crime and serves no legitimate penal purpose.” How is it possible that one judge after another could condemn a man to life behind bars for such an insignificant and non-violent transgression? One must conclude that these judges have lost their capacity for mercy – and what indeed is justice without mercy? As Shakespeare put it, “It is excellent to have a giant’s strength, but it is tyrannous to use it like a giant.”

We cannot, however, simply condemn the judges who issue these cruelly harsh sentences. In over 80 percent of cases where the judge hands down a life sentence without parole – the harshest sentence that can be imposed short of the death penalty – for a non-violent offense, the judge has little alternative: the sentence is automatic and mandatory.

Image on the right: The Louisiana Supreme Court building in New Orleans (Nolanwebb/Wikipedia) 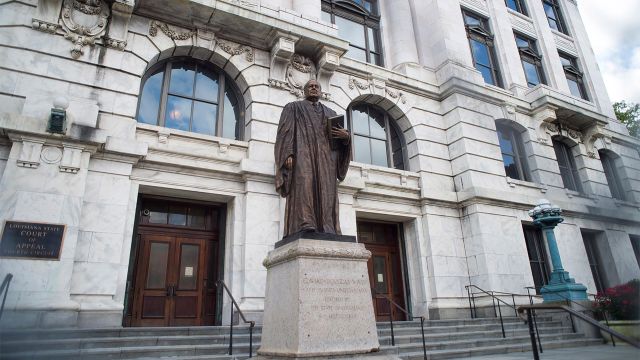 Chief Justice Johnson points out that

“Mr. Bryant’s incarceration has cost Louisiana taxpayers approximately $518,667. Arrested at 38, Mr. Bryant has already spent nearly 23 years in prison and is now over 60 years old. If he lives another 20 years, Louisiana taxpayers will have paid almost one million dollars to punish Mr. Bryant for his failed effort to steal a set of hedge clippers.”

It is surely an absurd, extravagant, and shameful use of taxpayer funds. In fact, taxpayers spend nearly $2 billion a year to keep non-violent offenders locked away for life.  So how does such a thing occur?

Bryant was sentenced to life in prison, without the possibility of parole, under the habitual offender statute, due to four prior felony convictions. While an appellate court determined that to deny Bryant the possibility of parole was actually illegal, there are in fact over three thousand prisoners serving life without parole for non-violent offenses. This is a human rights issue, and the shame of it should shock every American possessed of conscience. A 2013 ACLU report found that roughly seventy-nine percent of those 3,278 prisoners, “were sentenced to die in prison for non-violent drug crimes.” Other infractions were as minor as “siphoning gasoline from an 18-wheeler, shoplifting three belts” or “breaking into a parked car and stealing a woman’s bagged lunch…”

Cruel and Inhuman: UN Slams US as Only Nation that Sentences Children to Die In Prison

“Such petty theft is frequently driven by the ravages of poverty or addiction, and often both. It is cruel and unusual to impose a sentence of life in prison at hard labor for the criminal behavior which is most often caused by poverty or addiction.”

Indeed, Bryant’s life sentence goes beyond draconian – it is an obscene parody of justice; it is in itself a crime against all that makes us human; for the law has in effect decided that this man’s life is without any value, that he is unworthy of humane consideration. Indeed, these unjust laws are an affront to the fundamental principle that every human being is possessed with inherent dignity and worth. When you punish petty theft with the same severity that murderers and rapists might receive, you make a mockery of justice and in fact weaken the significance of these far more serious transgressions.

Precedent set by the Louisiana Supreme Court established that while a sentence might be permissible under the habitual offender statute, it may still violate a defendant’s constitutional rights if it is excessive and “makes no measurable contribution to acceptable goals of punishment.” Supposing that Bryant’s sentence was technically allowed, it was nonetheless plainly an infringement of his “right to humane treatment,” guaranteed by Article I, Section 20, of the Louisiana constitution; which forbids “cruel, excessive, or unusual punishment” and assures that “Full rights of citizenship shall be restored upon termination of state and federal supervision following conviction for any offense.”

Johnson goes on to argue that Bryant’s case is a modern manifestation of ‘pig laws’ which were “largely designed to re-enslave African Americans” following the Civil War,  targeting such actions “as stealing cattle and swine – considered stereotypical ‘negro’ behavior – by lowering the threshold for what constituted a crime and increasing the severity of its punishment.”

To drive Johnson’s point home, we might note that the Louisiana State Penitentiary, where Bryant is serving out his life sentence, was once the site of a slave plantation. Like the prison, the plantation was also known as Angola, after the African country from where the slaves originated. The Angola plantation was acquired by a major in the Confederate Army following the abolition of slavery. Inmates living in former slave quarters were subjected to a penal labor system in which prisoners could be leased out to private individuals, effectively maintaining slavery by other means. As Paul Gardullo, a curator at the National Museum of African American History and Culture, stated: “People – mostly young black men – were rounded up for petty crimes, and they were put to work as a way to control the newly free.”

Bryant’s case is by no means an isolated one. Excessive punishment, especially lengthy prison terms, is one of the major contributors to the “unprecedented rise of the prison population” and the distinctly American phenomenon of mass incarceration. Habitual offender laws, and harsh drug laws have been shown to be racially biased and ineffective (79.1 percent of the nearly 4,000 people incarcerated in Louisiana prisons as habitual offenders are black). In a 1994 interview John Erlichman frankly admitted that Nixon’s “war on drugs” was designed to criminalize black people.

So, Fair Wayne Bryant has spent most of his adult life in prison and may spend the rest of his life there for a petty theft. Since the death of George Floyd this country has been searching its soul, struggling to come to terms with its racist history, and searching for a path forward, a future in which there may indeed be “a new birth of freedom.” But if this nation is to overcome the plague of systemic racism, then we must revisit habitual offender statutes and end mandatory life sentences for non-violent offences. Bryant and thousands of others like him are being denied their fundamental right under the Eighth Amendment to the US Constitution not to be subject to “cruel and unusual punishment.” This inhumanity chokes the cause of justice and hollows our commitment to human rights the world over.

Sam Ben-Meir is a professor of philosophy and world religions at Mercy College in New York City. He is a frequent contributor to Global Research.