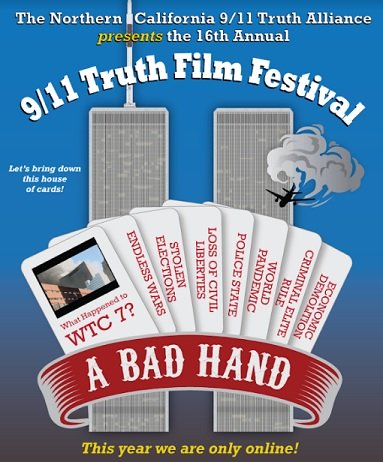 2020 is an unusual year; weddings have been cancelled, schools closed, almost all large public gatherings banned, the global economy dismantled; the middle class and Main Street’s small and medium sized businesses are struggling to survive.  In California, the film industry, the theaters have been hit hard.  The Grand Lake Theater, which has generously hosted countless events and 15 prior 9/11 Truth Film Festivals is currently closed.

In March, the Northern California 9/11 Truth Alliance could no longer meet legally and was forced to hold meetings in cyberspace. No Lies Radio, hosted Zoom meetings for the group; discussions and organizing continued, despite the obstacles and challenges that everyone faced  The group voted to go “virtual” this year, with the assistance of No Lies Radio, who has been web-streaming the live Film Festival for many years.

The Grand Lake Theater created a wonderful space for public interaction. The lobby was always filled with tables and the opportunity for people to converse, share materials, organize, inspire and support one another. It was where the choir met.  There were hugs, the opportunity to catch up with old friends and make new ones. The unique atmosphere of an old-style theater with popcorn, cookies, kindred spirits gathering together, in person, was a wonderful experience for many people.. However, a virtual Film Festival is the best we can do, under the current circumstances, when Draconian laws mandate social distancing and mask wearing. Online webinars do allow some interactivity, questions and answers, and bringing in distant speakers. Guns and Butter’s Bonnie Faulkner will kick off the Film Festival, as she has for 16 years. The program will be posted on the Northern California 9/11 Truth website [sf911Truth.org] when we finalize it. The Film Festival will be held Thursday, September 10th, noon to 8:00 pm Pacific Daylight Time.

As this dramatic year continues to unfold, the program is evolving; some films are still in production. Included are the best 9/11 Truth films that we could find, since last year’s Film Festival. In addition to 9/11, our speakers will address Covid19 and the problems facing the upcoming national election.

The impact of 9/11 continues to shape US domestic and foreign policy, robbing us of our liberties, and costing millions of lives, as the subsequent wars continue to wreak havoc abroad. The Northern California 9/11 Truth  Alliance has  been committed to “ seek and disseminate truths about the terrible crimes committed on September 11, 2001, exposing gaps and deceptions in the official story. Our goal is to inspire more eyewitness revelations, truthful media coverage, and a movement that will bring the responsible criminals to justice and eliminate governmental and corporate policies that enable criminal elements to commit such acts.”

September 11, 2001: The WTC Towers Were Brought Down by Controlled Demolition 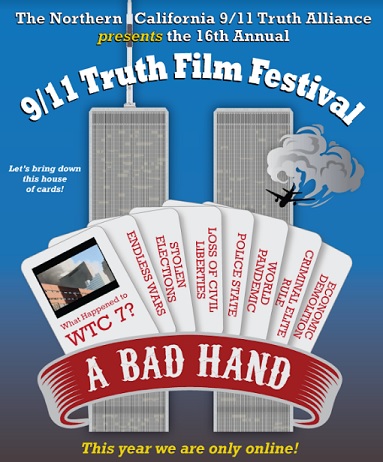 This year’s Featured Films include:

Produced by Firefighters for 9/11 Truth, this excellent, comprehensive documentary, includes details on the destruction of the three World Trade Center buildings on 9/11 that are not well known. Very informative and important, a must see, especially for those who have never realized the deep flaws within the official narrative

‘The Genesis of The 9/11 “War on Terror”: How Much Does Mainstream Academia Really Know?’

Compiled from an excellent presentation by Dr. Piers Robinson on 9/11/2019 at the Public Master Class on the events of September 11, 2001 in Zurich, Switzerland.  Dr Piers Robinson is Co-Director of the Organisation for Propaganda Studies, convenor of the Working Group on Syria, Propaganda and Media and associated researcher with the Working Group on Propaganda and the 9/11 Global ‘War on Terror’.  He is currently a Speciality Chief Editor for Political Communication and Society, Frontiers in Communication and sits on the editorial boards of several academic journals.

Produced by James Corbett, The Corbett Report. A detailed look at the whistleblowers, that have spoken out, whose voices and stories have challenged  the official narrative. They include- Kevin Ryan, Cate Jenkins, Barry Jennings, Michael Springmann and William Rodriguez.

And more to be announced.

Kevin Ryan- Heroic whistleblower, Kevin Ryan, was fired for going public on 9/11 by Underwriters Laboratories. He has continued to speak out, and investigate the events of 9/11. He has authored numerous articles, the book-‘ Another Nineteen: Investigating Legitimate 9/11 Suspects’ and has edited The Journal of 9/11 Studies. He will speak on “Parallels Between 9/11 and Covid19.”

Jonathan Simon– Author of ‘CODE RED: Computerized Elections and the War on American Democracy-Election 2020 Edition’, Executive Director of Election Defense Alliance, he has published numerous papers on various aspects of election integrity since 2004. Dr. Simon is a graduate of Harvard College and New York University School of Law and will address “Could the November Election be Stolen?”

New York Fire Commissioner Christopher  Goia of the Franklin Square and Munson Fire Department, helped pass a powerful resolution in support of the Grand Jury Investigation of 9/11 in July 2019.  He served in the Marine Corps, and as an Emergency Medical Technician for 25 years, he also worked  in construction, and volunteered for the Fire Department for three decades.

Erik Lawyer– Founder of Firefighters for 9/11 Truth. Currently Erik lives and works in Colorado building community and resilience. His organization, One Becoming One works on personal transformation, as well as overcoming fear through love.

Access to the Film Festival can be found at No Lies Radio.

Architects & Engineers for 9/11 Truth is behind “Justice Rising,” an online conference on the struggle for 9/11 justice. The international lineup features David Ray Griffin, Niels Harrit, and Steven Jones. It will also offer a deep look into AE911Truth’s upcoming feature documentary SEVEN.

Carol Brouillet Co-Founder of the Northern California 9/11 Truth Alliance, and organizer of many, many, conferences, film festivals, rallies, marches. Publisher of over 7,000,000 Deception and Perception Dollars to draw attention to the problems with the official 9/11 narrative and promote peaceful alternatives to the dominant paradigm. Mother, Congressional candidate, radio-show host for many years, concerned and active on many different issues, especially global economics. Her website is http://www.communitycurrency.org/.