France Asserts Itself in Iraq as US Withdraws. Macron’s Trip to Baghdad 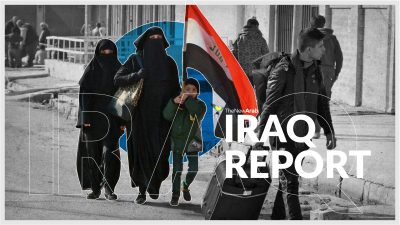 As the United States continues to drawdown its presence in Iraq more than 17 years after invading it, other powers have their eye on the vacuum that will be left by Washington cutting its losses and departing.

French President Emmanuel Macron recently made a trip to Iraq, pledging economic, military, and political support for the embattled government of Iraqi Prime Minister Mustafa al-Kadhimi, reigniting discussion about France’s role in Iraq since the 1980s and its arms sales to the former regime of Saddam Hussein.

Domestically, however, neighbouring powers are once again being eyed with suspicion as thousands of tonnes of fish have mysteriously died in Iraq’s southern marshlands.

Local tribes reliant on both fish and water buffalo for their livelihoods have been affected, with some alleging foul play from actors originating in both Iran and Turkey, both large regional economies attempting that export significant quantities of food, including seafood, to Iraq.

France asserts itself as US withdraws

French President Emmanuel Macron has declared a raft of aid and support packages to assist the beleaguered Iraqi government, as reports indicate that the United States is planning further troop reductions in the embattled country.

Thousands of American troops could be heading home from Iraq this November, according to unofficial remarks made by anonymous US officials to the Wall Street Journal last Friday.

American troops are in Iraq to train and advise Iraqi security forces battling the Islamic State (IS) group, but the relationship has been rocky at times in large part because of periodic attacks by Iran-backed militia groups that are not fully controlled by the Iraqi government.

US troops, after invading Iraq and toppling President Saddam Hussein in 2003, had withdrawn from the country in 2011 only to begin returning in 2014 after IS militants swept across the Syrian border and took control of large swaths of Iraqi territory.

If enacted, the move would be in line with President Donald Trump’s campaign promises to bring American soldiers home from “endless” war and conflict zones abroad.

“We look forward to the day when we don’t have to be there,” Trump said then. “We were there and now we’re getting out. We’ll be leaving shortly and the relationship is very good.

France, which has been heavily involved in Lebanese politics since the devastating blast at the Beirut seaport on 4 August, has also now weighed in on Iraq’s fractured and unstable political scene.

France, which has been heavily involved in Lebanese politics since the devastating Beirut blast, has also now weighed in on Iraq’s fractured and unstable political scene

President Macron arrived in Iraq last Wednesday as the first foreign head of state to visit the war-ravaged country since Prime Minister Mustafa al-Kadhimi took office in May.

Speaking from Baghdad, Macron said that Iraq had to assert its “sovereignty” despite being caught up in US-Iran tensions. “Iraq has been going through a challenging time for several years, with war and terrorism,” Macron said.

He noted that the country was still struggling to revive its economy, improve its education system and bring “military elements and militias” under state control.

Iraq has recently been rocked by a spree of targeted killings of activists, nearly a year after the start of mass public protests that were met with a bloody response.

“These challenges are playing out in an extraordinarily tense regional context, with very strong Iranian sway and repeated incursions by Turkey, which is increasingly intervening in Iraqi domestic affairs”, Macron said at his final press conference before leaving.

What is becoming increasingly apparent, however, is Macron’s attempt to undermine his foes on the international stage by using Iraq as an arena to settle scores.

Ankara, which launched a cross-border assault on Kurdish rebels in the north in June, has clashed diplomatically with France over the conflict in Libya and eastern Mediterranean gas rights.

The French president has also had a strained relationship with his American counterpart, and so his insertion into Iraqi politics at a time when the United States is considering reducing its footprint in the country can be interpreted as an attempt to ‘one up’ France’s traditional ally.

France has previously been intimately involved with the former Iraqi Baathist dictatorship. It helped Iraq construct its Osirak nuclear power plant which was destroyed by an Israeli airstrike in 1982, and supplied the Iraqi military with state-of-the-art French arms.

The Elysee risks being seen as attempting to reconstruct its relationship that it had already long-enjoyed with various Iraqi regimes, and its promises of assisting Iraq with its sovereignty may be viewed in that light.

Thousands of tonnes of fish have mysteriously floated to the surface of Iraq’s southern wetlands, all dead and for seemingly no discernible reason which has raised suspicions amongst the Arab marshland tribes inhabiting the area.

Iraq has recently been rocked by a spree of targeted killings of activists, nearly a year after the start of mass public protests that were met with a bloody response

For thousands of years, various civilisations and tribes have lived off of the flora and fauna of the southern marshes, known as the Ahwar of southern Iraq which are listed as a UNESCO world heritage site.

The tribesmen would often fish in the wetlands fed by the Tigris and Euphrates rivers, and would also allow their water buffalo to graze in the surrounding areas, selling what they did not eat for themselves.

However, this traditional way of life is now in jeopardy after masses of fish were discovered dead and floating on the surface under suspicious circumstances that locals have blamed on gangs affiliated with Iranian and Turkish seafood traders wishing to monopolise the Iraqi market.

Hussein Serhan, 70, is one of these tribal fishermen. “It’s an ecological disaster,” Serhan told AFP. “We lost all our revenues. We need years to recover.”

Other fishermen speaking to AFP had more specific theories about who was responsible. “Gangs,” said Hussein Ali, 37, who fishes on another bank of the 325-square kilometre (125 square mile) al-Delmaj marsh, in neighbouring Wasit province.

Ali and others blame groups with alleged links to fish importers for poisoning local supplies, although they did not specify what substance may have been used.

“They have also installed dams along rivulets that feed the marshes, which means water levels drop,” Ali added. He said anyone who tries to remove the dams, installed to horde water levels and fish stocks, is threatened. “More than 2,000 families live off fishing in al-Delmaj. We don’t know how to do anything else,” Ali said.

The Himri barbel fish native to the wetlands is a mainstay of the traditional Iraqi national dish of masgouf, which is grilled all over Iraq but is particularly famous in the capital Baghdad. Its popularity ensures that it is sold and provides the tribes with an income.

However, this is not Iraq’s first riverine disaster: in 2018, fish farmers alleged their stocks were poisoned after millions of carp died.

In March 2019, a United Nations probe put the cause down to the Koi Herpes Virus, saying overstocking and low-quality river water likely furthered its spread. However, this year, a preliminary study by the Iraqi agriculture ministry ruled out any viral or bacterial cause, so allegations of foul play are again floating to the surface.

In June, Iraq’s water ministry said its employees were shot at by criminal gangs as they tried to remove illegal dams, lending further credence to the allegation of the marsh tribes inhabiting the area, who clashed with an armed group that was trying to illegally dam streams in August.

As the US continues to drawdown its presence in Iraq more than 17 years after invading it, other powers have their eye on the vacuum that will be left by Washington

Furious locals accuse both federal and provincial authorities of failing to secure the marshes. “Where is the state in all this? Where are they as these disasters threaten to annihilate our fish?” said Ali.

One speculative theory swirling among Iraqis is that Turkish and Iranian companies that usually import seafood stocks into Iraq had paid people to deliberately poison the marshes or disrupt water flows after becoming concerned that Iraqi consumers were opting for increasingly cheap barbels, squeezing the imported seafood out of the market.

Barbels are typically sold to neighbouring Gulf countries but this year, with borders closed for months due to Covid-19, the whiskered fish flooded local markets leading Iraqis to opt for these affordable domestic catches, stacked high in wooden stalls, instead of imported fish.

Without urgent state intervention to include not only law enforcement measures to curb illegal gangs, but also diplomatic efforts to encourage Turkey to release more waters further upstream behind Turkish hydroelectric dams, Iraq’s biodiverse marshes and the traditional ways of life found there could be in serious jeopardy.

Featured image is from The New Arab

France Asserts Itself in Iraq as US Withdraws. Macron’s Trip to Baghdad