Is Nepal Skirting, Denying or Defying the COVID Pandemic?

Is Nepal Skirting, Denying or Defying the COVID Pandemic?

News from the Himalayas is scant this year. No Everest or K2 summiting; nothing about the railway from China; no new Sherpa biographies.

Demonstrations in Kathmandu protesting India’s territorial claim on Kalapani, a spur of land at Nepal’s furthest northwestern border subsided after a talk between their respective prime ministers. Then military skirmishes between India and China on their shared border raised anxiety in Kathmandu.

As for how the pandemic is affecting Nepal, scant news might lead to a conclusion that the country’s thin air or its pantheon of well-attended deities has immunizes residents from Covid’s ravages. Nepal’s low death toll—322 (with 52,000 cases reported to date, although rising rapidly)—for a population of 30 million is remarkable, also inexplicable given the government’s weak public health policy and shoddy management. Some citizens timidly suggest they might share a genetic immunity; others claim that popular herbal bromides protect them. Cynics accuse the government of hiding the real death toll, or worse, that it simply doesn’t know the count.

Lack of information and public distrust heighten tensions around the growing medical threat. Throughout early summer, while Covid-19 wreaked havoc across Europe, U.S.A. and in nearby India, Nepal’s death toll remained below 100. This did not however mean the population was unaffected: migrant workers were stranded; essential imports were threatened and building projects and business in general came to an abrupt halt; tourism ceased. When India and the U.S. (countries Nepali politicians closely follow) imposed lockdowns, Nepal’s administration followed suit. Except it did so as a knee-jerk reaction; it had no short-term relief plan and no long-term management strategy. When India eases rules, Nepal does too, and when its southern neighbor announces restrictions, officials in Kathmandu adopt a similar policy.

The government made no arrangements to mobilize social and economic services to help citizens cope.

All schools and colleges closed (and remain shuttered); inter-city bus transport was halted and international air travel and internal domestic flights that link remote hill regions to lowland cites and the capital ended. Kathmandu’s streets turned eerily empty. Even travel by motorcycle was prohibited. Next, all these closures were strictly, often pitilessly, enforced by a heightened nationwide police presence.

Exacerbating Nepal’s crisis was an influx of returning migrant workers:– tens of thousands of more than four million, mainly men, employed in Malaysia, the Gulf States and India. Reports of jobless laborers walking long distances to their homes across India included Nepalis who, when they reached the border of their homeland, found entry barred, and were then quarantined in camps inside India. The Nepal government’s unkind response was matched by more obstacles for those who managed to cross the 1,088-mile border.

Have Nepal’s People Managed a Healthy Breakthrough in the Covid-19 Crisis? 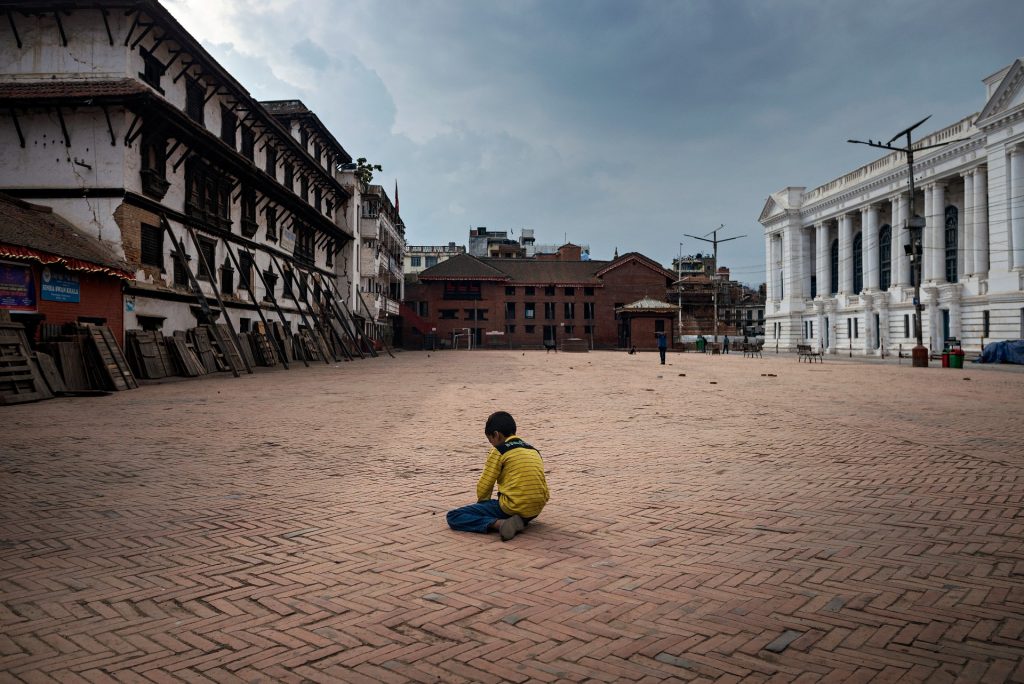 Once inside their homeland these beleaguered souls found themselves unwelcome in border cities and in Kathmandu on their first stopover en route to the interior. City residents feared new arrivals might be carrying the virus with them. Then, many returnees who reached their home village (usually by foot) were banned from entering until they passed yet another quarantine period.

Added to medical threats are lost incomes; so families who’d grown dependent on workers’ remittances—anecdotal reports claim that every house in Nepal has at least one member employed abroad– are also negatively impacted. Doubtless, Nepalis are among millions of other laborers caught in limbo in Qatar,Saudi Arabia and elsewhere.

Nepal is not without resources of its own to alleviate Covid-related hardships but the government has been stingy, relying largely on lockdown enforcement and on a vigorous public information campaign to instruct citizens about what safety measures they should follow.

Several million dollars donated by the WHO was to provide for testing and for PPE and treatment facilities for stricken Nepalis. This finances limited testing at regional centers nationwide as well as the construction of quarantine shelters. (Testing is reportedly contracted out to private agencies who charge the Nepali equivalent of $11.00 per test, but few people can manage this fee. But free tests are also available.) Beyond Kathmandu Valley and major cities, hospital treatment for serious Covid cases is scarce. (The ‘socialist’ government, led for several years by leftist parties, is hardly socialist in practice, promoting private hospitals over establishing a national health system for example.)

Many citizens feel their government must do more and they suspect Covid-targeted aid is another source for officials to line their pockets. Growing discontent at Kathmandu’s handling of the pandemic seems to have no effect. The main policy to deal with the crisis remains simply an on-off imposition of the lockdown. Probably, like the public, ministers anxiously watch international news for the announcement of a successful Covid vaccine.

Businesses in the capital are suffering badly, and with no government relief to tide them over, many will fail. Lines for food handouts from government and private or religious agencies are longer.

As in many Asian societies, Nepal’s elderly are well cared for by their children at home. So this country will not see the nursing home death toll that Americans and British experienced.

During the crisis Nepalis have made good use of IT facilities and their readily chargeable cell phones to weather the Covid storm. Nepal’s media have remained vigorous; and teachers and officials (urban and rural) have adapted to the use of zoom meetings, and online teaching, once limited to elite schools for children of the wealthy, is now widely used.

What citizens most lament is their incompetent, corrupt administration. Many had thought that with the unification in 2018 of squabbling, dysfunctional leftist parties, they could build a stronger nation; they are sadly disappointed.  As the eminent Canada-based Nepali writer Manjushree Thapa notes:  “I think about how high people’s expectations were of Nepal’s governing party (an alliance between Marxist-Leninist and Maoist communist parties) when they voted it into a majority. It’s all just deteriorated into a cabal of ‘high’ caste men”.

B. Nimri Aziz is an anthropologist and journalist who’s worked in Nepal since 1970, and published widely on peoples of the Himalayas. A new book on Nepali rebel women is forthcoming. She is a frequent contributor to Global Research.