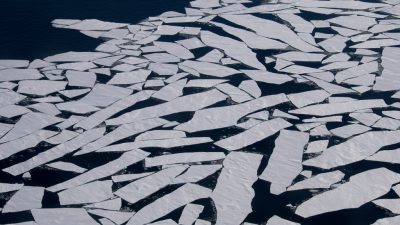 A 42 square mile block of ice has just hived off from the Arctic’s largest ice shelf, in northeast Greenland, alarming climate scientists. That is the size of Santa Barbara, California. It is ginormous.

The Geological Survey of Denmark and Greenland reports,

“Annual end-of-melt-season area changes for the Arctic’s largest ice shelf in Northeast Greenland are measured from optical satellite imagery, and it shows that the area losses for the past two years (year 2018/2019 and year 2019/2020) both exceeded 50 km2. In total an area nearly twice that of Manhattan Island, New York. In the survey period since 1999, the ice shelf has lost 160 km2.”

In the old days before human beings started burning so much coal, gasoline and natural gas, there were seasonal changes to the ice shelf. It would melt a bit in the summer but then grow back in the winter. Now it is just melting.

The Associated Press reports that last year, in 2019 alone, Greenland lost an unprecedented amount of ice, enough to cover all of California in over 4 feet of water. The average woman in the US is 5’5″ and the average man 5’10” so that would be up to their chests. The whole state.

The survey gives a graph where you can see how out of line 2020 has been with the average temperatures of the previous decade: 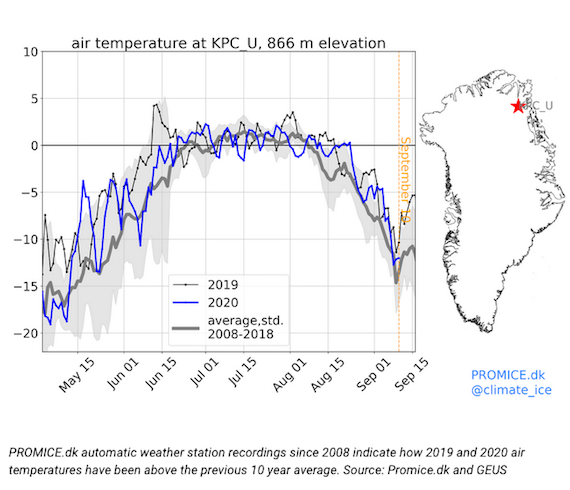 Average temperatures in Greenland have heated up by 5.4 degrees F. since 1980.

Speaking of the disintegration of glaciers, it is happening in Antarctica, too. There are two gargantuan glaciers, Pine Island and Thwaites, that are already responsible for 5% of sea level rise. They anchor the West Antarctic Ice Shelf. If they become unmoored, and the parts of the ice shelf that are not already in the water plop into the ocean, it would raise sea level by an average of 10 feet over time.

That would pretty much do in Miami and New Orleans, but also parts of lower Manhattan. It would be a catastrophe.

So the bad news? They are becoming unmoored.