US governors told in February that pandemic would get “much worse,” but did not alert public

US governors told in February that pandemic would get “much worse,” but did not alert public

In a secret Feb. 9 meeting, 25 US governors were told by Centers for Disease Control and Prevention (CDC) Director Robert Redfield, “The coronavirus outbreak is going to get much, much worse before it gets better,” even as those same governors publicly downplayed the pandemic.

The report of the meeting was detailed in Bob Woodward’s recently published book, Rage. Woodward made headlines earlier this month when he published transcripts of Trump admitting that he sought to downplay the pandemic in the eyes of the public.

But no attention has been given in the media to the growing evidence, including in Woodward’s book, that Trump’s cover-up involved not just the White House, but both houses of Congress and a wide range of government officials.

Panelists facing the governors at the NGA meeting on February 9

Woodward says the briefing included National Institute of Allergy and Infectious Diseases (NIH) Director Dr. Anthony Fauci, Redfield and “other members of the Coronavirus Task Force” who all “took their seats at a table in a large conference room in Washington” that was attended by “over 25 state governors.”

“The coronavirus outbreak is going to get much, much worse before it gets better, Redfield warned. We have not even seen the beginning of the worst, Redfield said, letting his words sink in. There is no reason to believe that what’s happening in China is not going to happen here, he said. There were nearly 40,000 cases in China then, with more than 800 deaths, barely five weeks after announcing the first cases. I agree completely, Fauci told the governors. This is very serious business. You need to be prepared for problems in your cities and your states. Fauci could see the alarm on the governors’ faces. ‘I think we scared the shit out of them,’ Fauci said after the meeting.”

Although the author of Rage does not name the other officials on the panel, a Health and Human Services (HHS) press release—which reports the briefing without mentioning Redfield’s warning—says that they were Acting Deputy Secretary of Homeland Security Ken Cuccinelli, HHS Assistant Secretary for Preparedness and Response Robert Kadlec and CDC Deputy Director for Infectious Diseases Jay Butler.

While there is no published list of state governors in attendance at this special session—the agenda for the three-day conference at the Walter E. Washington Convention Center and Marriott Marquis hotel does not include the coronavirus briefing—a partial list can be assembled from those speaking on the second day of the NGA winter meeting. 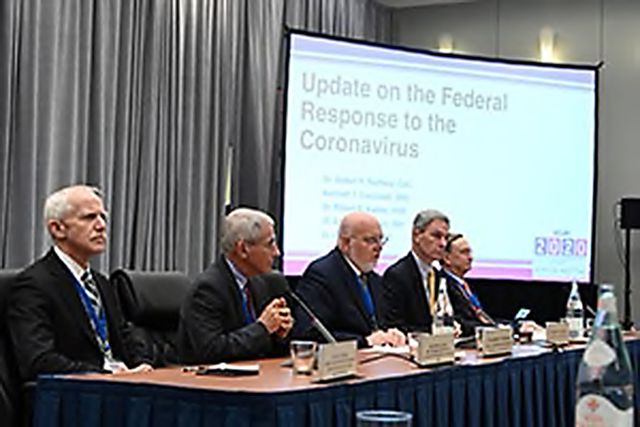 Panelists at the February 9 coronavirus presentation to the NGA

Not one of the governors among the group of more than 25 who sat through the presentation in Washington D.C. on Feb. 9 reported to news media or to the public that Redfield and Fauci told them, “we have not seen the beginning of the worst” and that “there is no reason to believe that what’s happening in China is not going to happen here.”

Instead, the NGA meeting was followed by a campaign of silence, misinformation and lies spearheaded by the White House and President Trump. On Feb. 9, there were a total of 12 confirmed cases of COVID-19 in the US and the primary concern of the entire ruling establishment was not the dangerous and deadly threat to public health posed by the pandemic but making sure that the truth about it did not get out.

Additionally, the corporate media—which has focused exclusively on Woodward’s interview with President Trump—has not reported on this revelation of bipartisan cooperation with the White House in hiding from the public what the top public health experts were saying in the earliest days of the pandemic, information that could have saved tens or hundreds of thousands of lives.

As Woodward points out in Rage, “The official press release from the Department of Health and Human Services describing the [NGA] meeting read: ‘The panel reiterated that while this is a serious public health matter, the risk to the American public remains low at this time, and that the federal government will continue working in close coordination with state and local governments to keep it that way.’”

As Woodward explains, “The next day, President Trump said publicly three times—once at the White House, once on TV and once at a New Hampshire rally—that the virus would go away on its own. ‘When it gets a little warmer, it miraculously goes away,’ he said at the packed rally. ‘I think it’s going to work out good. We only have 11 cases and they’re all getting better.’”

These facts substantiate the September 10 assessment made by the World Socialist Web Site about Woodward’s book, that President Trump’s plot against the people of America and the world was aided and abetted by accomplices in the Democratic and Republican parties and the corporate media.

The plot against America and the world: How the US government and the media suppressed the truth about the COVID-19 pandemic
[10 September 2020]