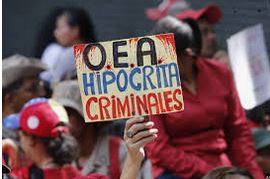 A year since the Organization of American States made unfounded claims of electoral fraud in Bolivia, leftist leaders from across the region have called for its Trumpian secretary general to resign. Throughout its history, the OAS has been a tool of Washington’s domination of Latin America — and an obstacle to genuine efforts at regional integration.

In a letter initiated by the Puebla Group, twenty-nine current and former presidents, ministers, and parliamentarians state that subsequent events have confirmed “there was no fraud in the October 2019 elections and that Evo Morales would have been sworn in as legitimate president of Bolivia if the OAS, in its position as observer, had not refused to recognize the results.”

They note that when the OAS questioned the results — despite the lack of any evidence of fraud — it helped “unleash a situation of political and social violence that resulted in a coup and the subsequent resignation of President Evo Morales.”

In light of this, “it is obvious that the regional leadership of OAS secretary general Luis Almagro has come under serious scrutiny. The role he played in the destabilization of democracy in Bolivia and the non-inclusive relations he has maintained with other countries in the region prevent him from being able to continue playing this role…”No Advertising – No Government Grants – No Algorithm – This Is Independent MediaGet Our Free Newsletter

This mention of “non-inclusive relations” refers to Almagro’s role in coordinating with the United States and the Lima Group, a regional coalition of right-wing governments, to lobby for the exclusion of Venezuela’s government, headed by president Nicolás Maduro, from the OAS and other regional bodies. The Lima Group instead seeks recognition for opposition leader Juan Guaidó, who proclaimed himself the country’s “interim president” in 2018. Following Venezuela’s withdrawal from the OAS in 2018, the body voted eighteen to nine (with seven abstentions) to accept a Guaidó envoy as Venezuela’s delegate.

The letter concludes that Almagro’s resignation “would help recover peace in the region and reactivate the regional integration that we desperately need in these times of pandemic.” But while there is no doubt that Almagro has to go, history tells us that the OAS’s problems run much deeper than its current general secretary alone.

Indeed, far from seeking to bring together neighbors as equals, the OAS was established by the United States in 1948 as an instrument for asserting Washington’s geopolitical power over what it traditionally viewed as its “backyard.” While OAS members include all the countries of North, South, and Central America, and the Caribbean — minus Cuba — it is headquartered in Washington and receives most of its funding from the United States.

Set up in the midst of its Cold War, the OAS’s subordination to US anti-Communist interests at the time was made explicit through the expulsion of Cuba after its 1959 revolution. “The adherence by any member … to Marxism-Leninism,” it was argued in the 1962 resolution that booted Cuba out of the regional body, “is incompatible with the inter-American system.” Anti-Communist dictatorships that presided over the massacre of leftist insurgents were welcome, even if they were occasionally criticized by the OAS’s Inter-American Commission on Human Rights.

The collapse of the Soviet Union and rollback of Central American leftist guerrilla movements in the 1980s and ’90s led to a shift in US policy goals in the region. The priority was now to extend its neoliberal economic agenda through the expansion of its newly inked North American Free Trade Agreement (NAFTA) beyond Canada and Mexico.

The first signs of trouble for the United States, however, appeared at the third Summit of the Americas, held in Canada in 2001. As protesters took to the streets outside the meeting, inside, the first so-called “Pink Tide” progressive president to attend such a summit — Venezuelan leader Hugo Chávez — raised a solitary voice against the pro-corporate trade agreement.

The following year, Chávez was briefly ousted by a military coup that lasted less than forty-eight hours before it was defeated by a popular uprising. While most countries in the region immediately condemned the coup and called on the OAS to do the same, the United States said Chávez “had provoked the crisis” and described the coup regime as a “transitional civilian government.” Only several days later, with Chávez firmly back in power, did the OAS finally condemn the coup.

By the next Summit of the Americas, held in Argentina in 2005, Venezuela, now in alliance not only with the social movements outside but new progressive and centrist governments from Brazil, Argentina, Paraguay, and Uruguay inside, helped bury the FTAA project. The shifting balance of forces meant the United States was left with little option but to seek out bilateral free trade agreements with a shrinking number of right-wing governments.

The emergence of these new governments — a direct result of the rising power of social movements across the continent — was accompanied by a growing sentiment of regional integration. This new spirit sought to put aside differences and bring the region together to discuss common problems, without US (and Canadian) involvement.

At a political level, this process of integration took the concrete form of the Union of South American Nations (UNASUR), formed in 2008, and the Community of Latin American and Caribbean States (CELAC), established in 2011. Their emergence was not without difficulties, but these organizations slowly began to supplant the OAS as the main institutions for facilitating regional dialogue and resolving conflicts.

In March 2008, the region seemed on the precipice of war after Colombia illegally bombed a Revolutionary Armed Forces of Colombia (FARC) camp on Ecuadorian territory. For many, the timing of the attack by a staunch US ally was not coincidental, occurring just weeks out from a preparatory meeting scheduled in Colombia to finalize details for launching UNASUR later that year.

In response, a Group of Rio summit involving representatives from nineteen Latin American member countries was immediately convened. Those present unanimously resolved to reject the actions of the Colombian government and any further violation of the sovereignty of another country. Colombian president Álvaro Uribe even issued a formal apology. In what was undoubtedly a first — at least since the formation of the OAS — a regional conflict was debated and resolved without direct US involvement.

Later that year, in September 2008, an emergency meeting of UNASUR was convened amid a coup attempt in Bolivia. At that meeting, the governments of South America unanimously expressed their “full and decided support for the constitutional government of President Evo Morales” and warned they would “not recognize any situation that entails an attempt for a civil coup that ruptures the institutional order, or that compromises the territorial integrity of the Republic of Bolivia.” The resolution was a significant blow to Bolivia’s right-wing opposition and contributed to the ultimate defeat of the coup.

It is perhaps unsurprising, then, that with the fall of several progressive and centrist governments during the past decade, right-wing forces have sought to dismantle (UNASUR) or put on hold (CELAC) these initiatives and breathe new life into the OAS.

Attempts under Almagro to restore the OAS to the center of regional politics are part of a greater push by Washington to reassert its role in the region, something that had diminished during the years when the “Pink Tide” was on the advance.

These attempts have not come without tensions, as evidenced by the rise of the Lima Group, aimed at isolating Venezuela and aiding the US intervention in that country, but also the Puebla Group, which is aimed at rebuilding the ties between the left-wing and progressive political groups and parties across the continent.

Such tensions were also on display in the divided vote over Almagro’s reelection this March. Such divisions within the OAS had not been seen in decades — previous secretary generals had been approved unanimously, and often by acclamation, despite it being a secret vote.

The OAS can never be a democratic forum for regional dialogue or conflict resolution, and not just because of its infrastructural and financial dependence on Washington. Rather, what dictates this is the reality of the unequal power dynamics that exist between the imperialist countries of North America and the rest of the Americas. This also explains why the United States cannot tolerate its neighbors down south uniting without its presence — a move that inherently weakens US regional hegemony.

Today, the bid to invoke the political and diplomatic support of the United States as a guarantor of “stability” is again becoming more apparent, across the region. The attempted coup by Juan Guaidó in Venezuela in 2019 and his “Twitter presidency” have been openly and directly financed and sustained by resources of US-backed agencies such as the USAID and the NED, while the consolidation of Jeanine Añez’s post-coup regime in Bolivia was largely possible through the diplomatic support of the Trump administration, leading to a “domino effect” of official recognitions by the right-wing governments of the region.

With political winds once again blowing to the left in the region, governments south of the Río Grande will be faced with a choice regarding the kind of regional integration they want to pursue. The chance to restart CELAC exists with progressive governments now in power in two of the three largest countries in the region, Argentina and Mexico (who currently holds the presidency of the organization).

These same two governments played key roles in the Bolivian crisis last year. In Bolivia, the new MAS government, overwhelmingly returned to power in the October 2020 elections, has signaled its intentions to revitalize UNASUR. Jair Bolsonaro’s right-wing government in Brazil will be an important, but not necessarily insurmountable, obstacle to overcome in these processes.

At the same time, the existential crisis within the Lima Group continues to escalate with every right-wing government being voted out, deposed, or facing a severe structural crisis.

With the departure of the governments of Enrique Peña Nieto in Mexico, Mauricio Macri in Argentina, Añez in Bolivia, Donald Trump in the United States, the removal of Martín Vizcarra in Peru, and the guaranteed departure of Lenín Moreno’s government in Ecuador and Sebastián Piñera’s in Chile, it has become clear that the original objective of isolating Venezuela has failed, though not without substantial damage to the latter’s economy as a result.

On the other hand, working with Almagro, the United States will want to cement the OAS’s role in the region. It will no doubt seek to push this agenda as host of the next Summit of the Americas in 2021. Yet for people’s movements and progressive forces in the region, the hope is that they can instead use this summit as a space to promote the kind of solidarity-based integration that helped defeat the FTAA.

Federico Fuentes is a solidarity activist and writer on Latin American politics. He coauthored Latin America’s Turbulent Transitions: The Future of Twenty-First Century Socialism as well as books on the new left in Bolivia, Ecuador, and Paraguay.