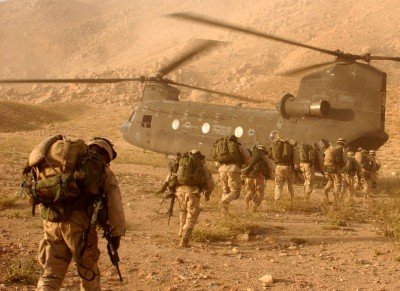 US officials told The New York Times that a ‘shadowy’ combination of special ops, Pentagon contractors, and intel operatives will likely stay

After President Biden formally announced his plan to withdraw from Afghanistan by September 11th, White House Press Secretary Jen Psaki was asked if special operations soldiers would remain in the country under the plan, which she declined to answer.

“I’m obviously not going to get into operational specifics from the podium,” Psaki said when asked if the removal of combat troops by September 11th will include withdrawing Special Forces.

“I will say that we may — we will have what is needed to secure a diplomatic presence,” Psaki added. “And those assessments will be made over the coming months and obviously led by the Defense Department and State Department in coordination.”

The US officially has 2,500 troops in Afghanistan currently, although reports have said the number is closer to 3,500. Besides soldiers, the US also has thousands of contractors working for the US military in the country. According to numbers released in January, there are over 18,000 Pentagon contractors in Afghanistan.

When Biden’s plan was first reported on Tuesday, current and former US officials told The New York Times that some sort of US presence will continue in Afghanistan.

“Instead of declared troops in Afghanistan, the United States will most likely rely on a shadowy combination of clandestine Special Operations forces, Pentagon contractors and covert intelligence operatives to find and attack the most dangerous Qaeda or Islamic State threats, current and former American officials said.”

When announcing his withdrawal plan, President Biden said the US needed to reshuffle its resources to better confront China, which is now a priority of the Pentagon. Considering Afghanistan’s Central Asian location and the fact that it shares a small border with China’s Xinjiang province, the US will undoubtedly at least maintain a CIA presence in the country.

Dave DeCamp is the news editor of Antiwar.com, follow him on Twitter @decampdave.Bipartisan Torpedo Against the Agreement for Afghanistan

A Secret War in 120 Countries: The Pentagon’s New Power Elite

Somewhere on this planet an American commando is carrying out a mission. Now, say that 70 times and you’re done… for the day. Without the knowledge of the American public, a secret force within the U.S. military is undertaking operations in a majority of the world’s countries. This new Pentagon…

The Obama administration is significantly expanding the US military role in Pakistan beyond that pursued by the Bush administration, directly employing US military force against anti-government Pakistani guerrillas involved only marginally, if at all, in attacks on US forces in neighboring Afghanistan, according to a recent article in the New…

23 February 2009The original source of this article is Antiwar.comCopyright © Dave DeCamp, Antiwar.com, 2021