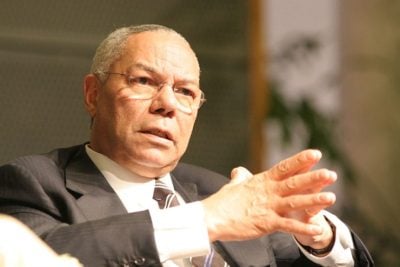 Former U.S. Secretary of State Colin Powell, who died Monday due to complications from COVID-19, was seeking the Council’s endorsement of the U.S. attack on Iraq, which had been already decided upon by the neoconservative inner circle surrounding President George W. Bush. He asserted that Saddam Hussein already had at his disposal biological and chemical weapons, that he was developing a nuclear arsenal, and that therefore Iraq was a legitimate target for military action.

To support his claim, Powell produced a vial of white powder, allegedly anthrax from the Iraqi arsenal. He played a recording of a supposed discussion among Iraqi military officers about UN inspection teams, which had been doctored to make the proceedings appear sinister. Staking his reputation as a cautious, matter-of-fact soldier, four-star general, and former head of the Joint Chiefs of Staff who served four presidents, he produced photographs of alleged Iraqi WMD depots and other facilities. He also showed detailed drawings of what he claimed were Saddam Hussein’s mobile chemical weapons production facilities.

As we now know, and as some of us suspected at the time, every statement Powell made on that day was untrue. Every single assertion was backed by “sources” fabricated by the neocon cabal which had decided to push America into war against Iraq many years earlier. Powell never belonged to this group, which looked down on him and eagerly plotted to exploit him. They wanted to turn him into a useful idiot, to use him – broadly speaking – the way Stalin used Walter Duranty and Hitler used Lloyd George.Colin Powell: Iraqis Will ‘Not Shed Tears’ for 2003 Invasion Architect

Colin Powell, to his eternal discredit, allowed some very bad people to use him. He failed to check the veracity of the material they prepared for him, even though his presentation was potentially a matter of life and death for thousands of people. He was told that his speech had been prepared by the National Security Council. In reality it was written by Vice President Dick Cheney’s team, which in the words of a summary of events published Monday by The Guardian,  “led the charge in browbeating CIA analysts into coming up with evidence and when that failed, going around the CIA altogether.”

Could Powell not smell a rat? Two years later, when he was no longer a senior official, Powell said the speech was “a blot” on his career. “It was painful,” Powell told Barbara Walters. “It’s painful now.”

His expression of remorse isn’t enough to exculpate him. Powell could not have been willfully oblivious to what was going on, as some of Stalin’s fellow travelers were. He made a deliberate moral choice, fully in accordance with his rank and station. “For Colin Powell, the situation put reputation and duty in conflict,” according to Sir Christopher Meyer, the UK ambassador in Washington at the time. “When the commander in chief of the United States of America says ‘Go to New York and deliver a presentation,’ a man like Powell doesn’t say no.”

Indeed, this is the crux of the matter. At a crucial juncture in his life Colin Powell decided that he would just follow orders, like countless officers before him, most notably German ones. He may have been a decent sort to start with, but the Superior Orders defense is unlikely to save him from the harsh judgment of history.