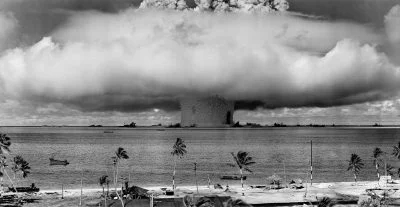 All Global Research articles can be read in 51 languages by activating the “Translate Website” drop down menu on the top banner of our home page (Desktop version).

The US dominates the Pacific Islands to an extent China can never hope to achieve. With Australia’s support, the US is now engaged in an arms build-up in its Pacific territories and de-facto colonies in a little known boost to its containment of China.

The US has three self-governing territories in the Pacific: Guam, American Samoa and the Northern Mariana Islands. Guam hosts some of the US’s most important bases the world. After a large scale military expansion on one of the main islands in the Northern Marianas, Tinian is expected to rival Guam in importance in coming years.

The US also has Compacts of Free Association with three countries covering thousands of islands in the Pacific – the Federated States of Micronesia, Palau and the Marshall Islands. The compacts are a de-facto form of colonialism which gives the US exclusive military access to these countries’ land and maritime surrounds in return for defence guarantees and financial assistance.

The Federated States of Micronesia has a population of around 100,000. It has a land area of 702  square km on 607 islands amid 2,600,000 square km of ocean. The US will build a new base there. The residents are concerned about the impact of the base as their islands are often tiny and the landscape important to their identity. The US is also establishing a new military base on Palau, which has 340 islands and a total population of just over 18,000. The Marshall Islands landmass is 181 square km amid 466,000 square km of ocean. Although the Kwajalein atoll is only 15 square km, it is exclusively a military base with an extraordinary array of US activities; including a key role in US testing interceptors aimed ballistic missiles.

The Chinese foreign minister Wang Yi recently visited seven South Pacific countries and signed various agreements in some, including the provision of infrastructure and police training , but he failed to get support for a 10-country trade agreement. He did not seek permission to build a navy base in the Solomon Island or anywhere else. Nevertheless, some saw the visit as an act of Chinese aggression. It is an odd view of aggression compared to the damage done by US, British and French testing of thermonuclear (also called hydrogen) bombs on Pacific islands, or when Australia helped invade Iraq.

The US conducted 105 nuclear tests in the Pacific, mainly in the Marshall islands, between 1946 and 1962, as part oftits program to develop thermonuclear bombs. Operational weapons were sometimes tested, including a submarine-launched war head. One test in 1952 completely vaporised the island of Eluglab. In 1954, a thermonuclear bomb tested on Bikini atoll exploded with force of 15 megatons – over 1,000 times bigger than the bomb dropped on Hiroshima. The radioactive cloud engulfed a Japanese fishing boat about 80 miles away in a white powder that poisoned the crew. One died from the exposure seven months later and 15 more in following years.

The radioactivity affected the drinking water and food. Children played in the ash-like powder. Some ate it. Marshall Islanders over a wide area were subject to abnormal radiological doses. In 2005, the US National Cancer Institute reported that the risk of contracting cancer for those exposed to the fallout was over one in three.

Nevertheless, in 1946, a US Navy Commodore had asked 167 people living on Bikini atoll to re-locate so their home could be used use “for the good of mankind”. They were resettled in 1969, but had to be evacuated again after high radiation levels were detected.

There has been some increase in the pathetically low initial compensation. But it is hard to compensate for the environmental damage and loss of cultural heritage, traditional customs and skills. In 2014, the Marshall Islands attempted to sue the US and eight other nuclear armed nations, for failing to move towards nuclear disarmament as required by the Nuclear Non-Proliferation Treaty. A US Court dismissed the suit in 2017.

Britain tested 40 thermonuclear bombs on an islands in the Kiribati group between 1957 and 1962. Troops from Britain , Fiji (then a British colony), and New Zealand worked on the tests. Many were harmed by radiation and other causes. As usual, the locals were treated badly and their water and lands polluted.

France conducted 41 atmospheric nuclear tests between 1966 and 1974 in French Polynesia. It then conducted 140 underground, primarily of thermonuclear bombs, until 1996. One of the islands used was subject to cracking. In an act of state terrorism, French secret service frogman killed a photographer when they bombed a Green Peace protest ship in Auckland harbour on its way to the French nuclear testing area.

Labor’s defence minister, Richard Marles now refers to France as a Pacific county, despite the fact that it is a European country with a tenuous justification for holding onto its colonial possessions in the Pacific – New Caledonia and French Polynesia. Labor used to oppose colonialism. Now it seems it’s good if the colonial power opposes China.

The South Pacific Forum comprises 18 members: Australia, Cook Islands, Federated States of Micronesia, Fiji, French Polynesia, Kiribati, Nauru, New Caledonia, New Zealand, Niue, Palau, Papua New Guinea, Republic of Marshall Islands, Samoa, Solomon Islands, Tonga, Tuvalu and Vanuatu. Not all are normally considered to be in the South Pacific. The inclusion of three countries with Compacts of Free Association with the US and two French possessions basically guarantees they will vote for what the US or France wants.

However, the legacy of the contemptuous disregard for the indigenous residents during massive hydrogen bomb tests ensures that  nuclear issues, including the passage of nuclear submarines, remain sensitive.

At the time of the negotiation of the South Pacific Nuclear Free Zone Treaty in 1985 Paul Malone wrote that it was for a “partial nuclear free zone”, as it did not prohibit the “passage of nuclear-armed ships or aircraft through the region”. Malone reported that some Pacific Island countries wanted to be Treaty to prohibit access to nuclear-armed warships. The then Prime Minister Bob Hawke insisted on that omission which reflected the wishes of the US. However, nuclear issues have been revived by the creation of the 2021AUKUS pact in which Australia is committed to buying nuclear powered submarines.

A journalist and researcher based in the Pacific, Nic Maclellan says, “Any hope that Australia’s island neighbours will welcome further nuclearisation of the region is folly. Within days of the UKUS announcement, statements from Pacific leaders, community elders and media organisations highlighted the persistence of the deep antinuclear sentiment.

The general secretary of the Pacific Conference of Churches, Reverend James Bhagwa tweeted

“Shame Australia, Shame.” The Solomon Islands Prime Minister Manasseh Sogavare told the UN General Assembly his nation “would like to keep our region nuclear-free . . . We do not support any form of militarisation in our region that could threaten regional and international peace and stability.”

The Kiribati President Taneti Maamau told the ABC, “Our people are victims of nuclear testing. We still have trauma. With anything to do with nuclear, we thought it would be a courtesy to discuss it with your neighbours”. He said he was especially concerned about Australia developing nuclear powered submarines which he said “puts the region at risk”

Fiji’s Prime Minister Frank Bainimarama tweeted that his father was among the Fijian soldiers the British sent to help with their nuclear bomb tests. He said, “To honour the sacrifice of all those who have suffered due to these weapons, Fiji will never stop working towards a global nuclear ban.”

The New Zealand Prime Minister Jacinda Ardern repeated that nuclear submarines “can’t come into our internal waters”. New Zealand and nine South Pacific Forum countries have ratified the new Treaty on the Prohibition of Nuclear Weapons. Australia hasn’t. The Samoa Observer wrote, “It is a relief seeing Prime Minister Ardern continuing to maintain the tradition of her predecessors by promoting a nuclear-free Pacific; probably she is the only true friend of the Pacific Islands.”

Brian Toohey is author of Secret: The Making of Australia’s Security State.

Featured image: The US conducted 105 nuclear tests in the Pacific, mainly in the Marshall islands, between 1946 and 1962. Image: Wikipedia

The original source of this article is Pearls and Irritations