Who is the Arch Racist: Hillary or the Donald? 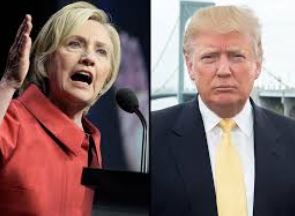 December 30, 2015 “Information Clearing House” – “Counterpunch” – Who is the arch racist, Hillary or Trump? To answer that, let us ask another question, a simple one. Which is worse: to denigrate some members of a group or religion or race – or to kill them by the millions? And maim more millions and displace even more millions? Which is more “racist”? With that in mind, who is the arch racist, Hillary or The Donald?

Do the liberals who criticize Trump, but not Hillary, as racist forget the slogan of the anti-Vietnam War movement, “Stop the Racist Bombing.”

And which causes more blowback, more revenge attacks by the victims – the denigration with words or the killing with bombs and sanctions?

Then consider the careers and statements of Hillary Clinton and Donald Trump. Is there any doubt who is the greater offender in terms of hostility to Muslims? And yet in all of the accusations of “racism” hurled at Trump from the editorial pages of the NYT to the most “progressive” web sites and outlets, there appears no corresponding charge against Hillary as racist. That is symptomatic of a deep imperial sickness, an inability to see what is all too clear. It is also an indication of the deep reach of the elite into all outlets of communication from the mainstream to most of the alternative ones

Let us consider some of the things that Donald Trump has had to say, most notably the following from the last debate of 2015 among the GOP candidates:

TRUMP: In my opinion, we’ve spent $4 trillion trying to topple various people that frankly, if they were there and if we could’ve spent that $4 trillion in the United States to fix our roads, our bridges, and all of the other problems; our airports and all of the other problems we’ve had, we would’ve been a lot better off. I can tell you that right now.

It’s a mess. The Middle East is totally destabilized. A total and complete mess. I wish we had the $4 trillion or $5 trillion. I wish it were spent right here in the United States, on our schools, hospitals, roads, airports, and everything else that are all falling apart. (Emphasis, jw)

Doug Fuda, a Catholic antiwar activist describes this statement as “almost a call for a desperately needed American repentance.”

Just campaign rhetoric, you might say – although hardly the kind you hear from the rest of the candidates, especially on the value of the lives of those the US bombed into oblivion. Then consider the following from Trump’s March, 2004, Esquire interview:

Look at the war in Iraq and the mess that we’re in. I would never have handled it that way. Does anybody really believe that Iraq is going to be a wonderful democracy where people are going to run down to the voting box and gently put in their ballot and the winner is happily going to step up to lead the county? C’mon. Two minutes after we leave, there’s going to be a revolution, and the meanest, toughest, smartest, most vicious guy will take over.

What was the purpose of this whole thing? Hundreds and hundreds of young people killed. And what about the people coming back with no arms and legs? Not to mention the other side. All those Iraqi kids who’ve been blown to pieces. And it turns out that all of the reasons for the war were blatantly wrong. All this for nothing! (Emphasis, jw)

That statement was made 11 years ago when Trump was a TV sensation, not a political candidate. A simple rule is that the greater the temporal gap between a candidate’s statements and voting day, the more heartfelt will be the statement. With that statement of 2004 you could not get further from the sentiment expressed by Hillary’s support for the war on Iraq or the proclamation by her close colleague Madeleine Albright that the Clinton sanctions on Iraq which killed hundreds of thousands, five hundred thousand children among them, were “worth it” to overthrow Saddam Hussein! And Hillary herself peddling every neocon war in sight from Iraq to Libya and now Syria. How can the liberals and progressives excoriate Trump but not Clinton as “racist”? And how can they ignore Trump’s words of compassion for those on “the other side”? Those words are unique among the current contenders for the presidency and they ought to earn Trump a sobriquet quite different from “new Hitler” or “racist.” Have the so-called progressives lost touch with reality?

And now Hillary claims that Trump’s words fuel the fire of ISIS. The fires of ISIS were raging long before Trump made his appearance on the national political scene. And they burn bright because the wars waged by the demented Hillary and the rest of the Washington political elite provided the fuel that fed the Jihadist flame. Trump’s words, advocating a temporary halt to the entrance of Muslims into the U.S., if they have had any effect at all, were but a handful of woodchips next to the forests of fuel that Hillary’s wars provided the conflagration that is ISIS. But Hillary is no stranger to the most outrageous of lies, including the charge that ISIS has made a video featuring Trump.

Now on late night TV Hillary, despite all the blood of non-whites on her hands, has the gall to say that Trump is “dangerous.” He certainly has become a danger to her shot at the presidency. But for her to act as though she cares one wit about the lives of people of color, especially Arabs and Muslims, is a very sick joke.

In the context of the presidential campaign, my liberal and progressive friends, go ahead and excoriate The Donald to the max for any genuine racism or bigotry. Have at it. This writer for one welcomes it. But do not do so without mention of Hillary’s record with the blood of millions of Muslims all over it, as the New York Times does. At best that is a half-truth, which of course is a full lie.

John V. Walsh can be reached at John.Endwar@gmail.com