Cutting the Cords of Empire: The Spectacle of US Elections 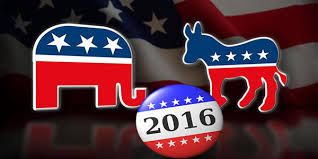 “The more powerful the class, the more it claims not to exist.” -Guy Debord, The Society of the Spectacle

It’s almost time for our quadrennial political distraction, masquerading as the US presidential election. As opposed to previous elections, this one feels quite different. Even with Obama/Romney in 2012, important, basic economic issues were discussed, health care reform was questioned, and foreign policy was given its due.

However, this time, the spectacle of the personalities seems to dominate the conversation: Mrs. Clinton is somehow on a feminist crusade, an inspiration for women everywhere. Going unmentioned are her irredeemable backers, such as the genocidal Henry Kissinger and Madeleine Albright. As for Trump, his version of America is as naïve, narrow-minded, and delusional as a Leave It to Beaver episode, or a Captain America comic book. In the background, the monstrosity of global capitalism goes unquestioned, and the cries from victims of US institutional racism and structural violence go unheard.

Global warming, broad economic policy, and nuanced foreign policy are simply too much to ask of these candidates. Their stupidity knows no end; their corruption and depravity know no bounds, and many of both of their supporters, as well as media, political, and corporate backers and sycophants can be considered “deplorable”. Many supporters of the two-party system do not bother to think about the damage either potential president would do to people outside the US. Many backers of Trump and Clinton have little to no basic knowledge of world cultures and history.

What are the cords that connect us to these “leaders”, to our American Empire? They are the same ones that the Industrial Revolution, the basis of our civilization, has implanted in each of us since birth, as Alvin Toffler explains in The Third Wave. As our social world became modeled on the factory floors developed in the 18th and 19th centuries, a set of unspoken principles were ironed out, and transferred to the political, social, and economic realms. (1)  As we shall see, these principles spread unchecked, and have infiltrated political discourse and social hierarchies. Toffler identifies these implicit rules as:

1) Standardization: Industry, production, and factory life revolved around endless loops and inputs of metals, fabrics, coal, oil, and specialized parts for trains, cars, etc. The simplification and standard mechanical parts used were mirrored and reflected in the culture at large: eventually, markets, the media, radio and TV, and even great art and literature succumbed to commoditization and homogenization. We now have mass marketing, public relations, and “electioneering”, where our duopoly controls all branches of government.

2) Specialization: With the explosion in the fields of science and engineering, specialized techniques were taught to develop, invent, and maintain mechanical and electric equipment. Yet again, this philosophy infected the general society:  only bureaucrats are able to work in the halls of power, only industrial experts are able to administer federal agencies, creating the disgraceful revolving door phenomena in Washington.

3) Synchronization: As more people flocked into cities with gleaming promises of steady, factory jobs, time and punctuality became of prime importance. Punching timecards and meeting quotas were necessary: there was no room for leeway, as assembly lines demanded strict timelines. The time demands of labor leaked into white-collar work as well: in banking and finance, railroads, time zones, and office jobs, advanced scheduling became the norm. Eventually, synchronization of the political system gained traction, and the imperial system came to resemble a deathly machine, marching in time to bloody footsteps: military, immoral diplomacy and ideology, and industry worked together to lord over Latin America with the Monroe Doctrine, annihilate Native Americans using Manifest Destiny, even as today, the excuse of the “War on Terror” is used to exterminate entire populations in Afghanistan, Iraq, Syria, Libya, and elsewhere.

4) Concentration: Think of the vast oil and coal stored underground for millions of years, only to be strip-mined, taken up by rigs, and transported by rail and tanker into vast refineries: concentration of energy. Further, every class of people became absorbed and intensified in the industrial system: workers into factories, children into schools, mentally ill into institutions, finance concentrated into New York, London, and Paris. Mega-mergers of corporations: today, it is the Apple, Google, Shell, and BP’s of the world who have coffers of blood money held tidily in banks throughout the world. Further, the concentration of technocrats who we supposedly need to run our societies: in the West, the military-industrialists, just as the Soviets were once told the nomenklatura was necessary.

5) Maximization: Firms were encouraged to grow as large as possible, and expand into as many fields as possible. Companies in Japan in the mid-twentieth century would actually have workers sing of the glory and greatness of their employer. Today, 62 people have the same wealth as half the world’s population. This is concentration and maximizing at its most obscene. Of course, you won’t hear Clinton, Trump, or anyone in Washington talking about this. Maximizing GDP, corporate profits, fossil fuel use, and flexing imperial muscle is what the Feds do best.

6) Centralization: Connected to the first five rules of empire stated above, centralizing power, wealth, and using knowledge for private gain is required to uphold the industrial state. Taxation, subsidies for industry, political debates via the sham Committee on Presidential Debates, the backroom shenanigans of the DNC and RNC, and cloak and dagger lobbying and bribery now dominate our system of government. Further, the Leviathan of state-sanctioned violence now lords over the world from the Pentagon and NATO, and the centralization of information runs through fiber-optic cables straight to the infernal, yet temperature-controlled offices of the CIA and NSA.

The elections have adopted all the patterns of the industrial, imperial state: we have standardized TV, scripted questions, airbrushed candidates, and childlike debates. We’ve seen specialized tactics of gerrymandering, vote-rigging, PR bullshit, and strategists whose careers accomplish nothing for the public good. We all know of the synchronization of Wall Street, defense and oil companies. The concentration of power in the hands of the few hardly needs mention: here’s the study by Princeton and Northwestern professors who conclude that the US is an oligarchy, not a democracy. We’ve witnessed the maximization of endless primaries, debates, press conferences, and town-hall meetings ad infinitum. The centralization of political ideology (triangulation in Clintonite terms, Machiavellian to a rational person) and the limitations of discourse that our candidates display are all too clear.

These are the iron chains holding us down, shackling us in Plato’s cave: our candidates are figureheads, shadows on the wall; they are puppets of the super-elite. The central position they carve out in the mainstream is really a pit, an abyss: one that we all find ourselves in, as we continue to vote for those who don’t fight for our interests.

The two best options for this election seem to be: voting for Jill Stein, or boycotting the election, as Joel Hirschhorn advocates. As for our obscene election cycles, I believe Zach de la Rocha summed it up best:

The camera’s eyes on choice disguised

Was it cast for the mass who burn and toil?

Or for vultures who thirst for blood and oil?

William Hawes is a writer specializing in politics and environmental issues. His articles have appeared online at Global Research, Counterpunch, Dissident Voice, The World Financial Review, Gods & Radicals, and Countercurrents. He is author of the e-book Planetary Vision: Essays on Freedom and Empire. You can reach him at wilhawes@gmail.com