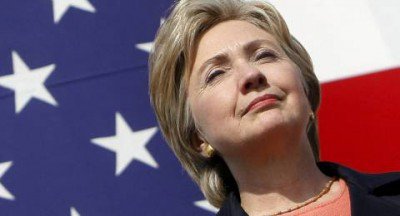 As she marches toward the US presidency, Hillary Clinton has stepped up her promotion of the idea that a no-fly zone in Syria could “save lives” and “hasten the end of the conflict” that has devastated that country since 2011.

It has now been revealed, of course, that Clinton hasn’t always expressed the same optimism about the no-fly zone in private. The Intercept (10/10/16) reported on Clinton’s recently leaked remarks in a closed-door speech to Goldman Sachs in 2013:

To have a no-fly zone you have to take out all of the air defense, many of which are located in populated areas. So our missiles, even if they are standoff missiles so we’re not putting our pilots at risk—you’re going to kill a lot of Syrians.

Other relevant characters, such as US Joint Chiefs of Staff chair Joseph Dunford (Daily Caller, 9/26/16), have warned that a no-fly zone in Syria would simply intensify the conflict—which presumably isn’t the best way to hasten its end.

Luckily for those who prefer to rally around illogic, however, plenty of media have already rolled out the welcome mat for peddlers of the “humanitarian” vision of increased Western military interference in Syria.

The New York Times’ self-appointed savior of women, Nicholas Kristof (10/6/16), invoked the plight of a young Syrian girl in Aleppo to conclude that Obama’s alleged “paralysis” on Syria “has been linked to the loss of perhaps half a million lives” in the country, as well as to “the rise of extremist groups like the Islamic State,” among other unpleasant outcomes. We have no “excuse,” we’re told, for “failing to respond to mass atrocities.”

Never mind that the rise of ISIS has much to do with that mass atrocity known as the US invasion of Iraq, thanks to which many young Iraqi girls and other human beings have suffered rape, mutilation and death. It’s convenient for certain industries, at least, when US weapons are deemed the solution for problems US weapons helped to create in the first place.

Furthermore, plenty of US weapons continue to flow to countries known for arming and funding ISIS and similar outfits—an arrangement unlikely to be rectified by a no-fly zone targeting the Syrian government and the Russians.

USA Today (10/8/16), meanwhile, ran an opinion piece by an American doctor who worked briefly at a now-destroyed hospital in Aleppo, arguing that the US “should lead the way in establishing real no-fly zones, either under United Nations auspices or with the British and the French”—because “otherwise, our inaction will continue to be an embarrassment and stand as an example of our spineless irresponsibility.”

But considering that there has already been plenty of US action in Syria—including the mistaken“pulverization” of whole families with children—it would seem we’ve already exhibited a fair amount of lethal irresponsibility.

Beyond the opinion pages, media figures are pushing the “humanitarian” approach with varying degrees of subtlety. Meet the Press host Chuck Todd (10/16/16) recently pressed Vice President Joe Biden on the lack of a no-fly zone over Aleppo, suggesting that the Obama administration will “look back and wonder what if? What if? What if? What if?”

Of course, no campaign for saving lives with bombs would be complete without everyone’s favorite examples of feel-good destruction from the former Yugoslavia. The Washington Post (9/9/16) hosted an opinion by Bosnia and Herzegovina’s first ambassador to the UN, Muhamed Sacirbey, straightforwardly headlined: “Western Military Intervention Saved Lives in Bosnia. It Can Work in Syria, Too.”

Sacirbey warns that “Syria’s largest city is on the brink of starvation. Bombed from the skies and besieged on the ground, Aleppo’s 2 million residents may soon be exterminated.” Gone, apparently, are the days of factchecking, when someone at the Post might have alerted the author to the reality that the vast majority of Aleppo’s residents live in government-controlled areas and are thus not under attack by said government.

Comparing Aleppo to besieged Sarajevo, Sacirbey determines that Sarajevans ultimately “escaped many of the horrors now awaiting Aleppo’s residents… because NATO opted (albeit belatedly and, too often, inadequately) to uphold its responsibility to protect Bosnian civilians.”

After lauding Bosnia’s no-fly zone, Sacirbey pulls this prediction out of a hat: “Limited military intervention in Syria would save civilian lives, perhaps as many as 200 a week.”

In their indispensable essay for Monthly Review (10/07), “The Dismantling of Yugoslavia: A Study in Inhumanitarian Intervention (and a Western Liberal-Left Intellectual and Moral Collapse),” Edward S. Herman and David Peterson make it unavoidably clear that the West’s business in Bosnia had nothing to do with saving lives—and much to do with the contrary.

The Bill Clinton administration, they note, actively sabotaged agreements to end the war at an earlier date, while “helping arm the Bosnian Muslims and Croatians and helping bring thousands of Mujahedin to fight in Bosnia.” America’s support in this case for jihadists—a secret alliance also discussed by scholar Tariq Ali (Guardian, 9/9/06)—further complicates the assumption that the US is somehow capable of fixing the current jihad problem.

In predictable fashion, US media led the charge to the Bosnian intervention (Extra!, 10-11/92), dutifully painting the Serbs as demonic aggressors, parroting inflated Bosnian casualty estimates and otherwise behaving as the official PR arm of the establishment.

A similar performance was repeated shortly thereafter with Kosovo, where minimal regard was given to actual facts on the ground and the specter of Serbian-waged genocide was instead hysterically invoked. Noam Chomsky (Monthly Review, 9/08) cited various reports, including from the British government, that the US-backed Kosovo Liberation Army was actually responsible for more killings than the Serbs in the run-up to NATO’s bombing campaign—a project that naturally also managed to kill several thousand people.

While Yugoslavia has now been fully dismantled, the myth of Western humanitarian intervention there has emerged unscathed; in his recent dispatch on Syria, Kristof brought up Kosovo as an example of how “the military toolbox has saved lives.”

To be sure, “saving lives” is a much nobler goal than, say, endowing NATO with a new lease on life or clearing the way for total neoliberal assault—two outcomes of the West’s Yugoslav ventures. Hence the utility, as Herman and Peterson write, of the “edifice of lies that serves and protects the Western interventions in the former Yugoslavia—and which laid the ideological foundations for the US role in Iraq and for future so-called humanitarian interventions.”

In Syria’s brutal war, meanwhile, humanitarian motives will presumably be utilized as a veneer for pursuing more fundamental goals, like neutralizing resistance to US/Israeli regional designs and promoting that profitable sort of chaos that produces massive arms sales.

And just as those in the West who failed to leap onto the bandwagon in Yugoslavia were denounced as “apologists for genocide” and the like, opponents of increased Western military action in Syria will be increasingly assailed as pro-Assad fanatics with Syrian blood on their hands.

One strong candidate for fanatic-hood is Greg Shupak, who in a recent Jacobin magazine dispatch (10/20/16) dared to argue that a no-fly zone “would actually represent an escalation of war that is guaranteed to harm civilians in the name of protecting them.” Emphasizing that opposition to said zone is not meant in any way “to minimize or rationalize the torture, mass killings or severe sieges enacted by the Syrian state and its allies,” Shupak continues: “The imminent question, however, is not, ‘Is the Syrian government good?’; it’s ‘Should America drop more bombs on Syria?’”

Because, at the end of the day, humanitarian war just isn’t humanly possible.

Belén Fernández is the author of The Imperial Messenger: Thomas Friedman at Work and Martyrs Never Die: Travels through South Lebanon.

The original source of this article is FAIR
Copyright © Belén Fernández, FAIR, 2016