Classrooms are not normally perceived as a backdrop for cultural exchange, a setting vital to preserving tradition. If they are not, what is an assembly of fourteen twenty-year olds doing, Iraqi in this case, engaged in analytical discourse in their college seminar room? They could be aspiring filmmakers, young writers critiquing a novel, journalism interns reporting on an assignment, or medical students in an anatomy class. The latter example is not anomalous. Consider where medical education fits into civilization, how it identifies both intelligence and compassion, and how essential medical research and healthcare are to a society’s well being.

What I am leading up to is justifying my inclusion of a dialogue I witnessed at Kerbala University Medical College within my account of the survival of Iraq’s culture and intellectual standards. My earlier essay on Sacred Assemblies describes two gatherings: a Baghdad tea shop where writers congregate every Friday, and the audience of an evening concert at the Iraq National Theater.

Classroom dialogues among medical students are, along with those encounters, public affairs too. They point up the essence of cultural development. Culture cannot survive in private, behind walls, in fear and in private. Studying may be solitary, but learning needs exchange and open debate. (It is astonishing and a testament to Iraqi resilience and love of learning, that given the oppressive atmosphere of Saddam Hussein’s rule, any cultural spirit existed in Iraq those years. But some did.) And now, following years of destruction, plunder, turmoil, and emigration in the wake of the U.S. invasion, many citizens who remain are moving forward, however haltingly and painfully.

In January, I decided to return to the city of Kerbala to meet colleagues at Al-Hussein General Hospital, a place I reported on during the 13- yearlong blockade. Iraq’s once highly acclaimed medical system was among the most debilitated by that embargo followed by the 2003 U.S. invasion, the military occupation, sectarian strife and the ISIS threat. 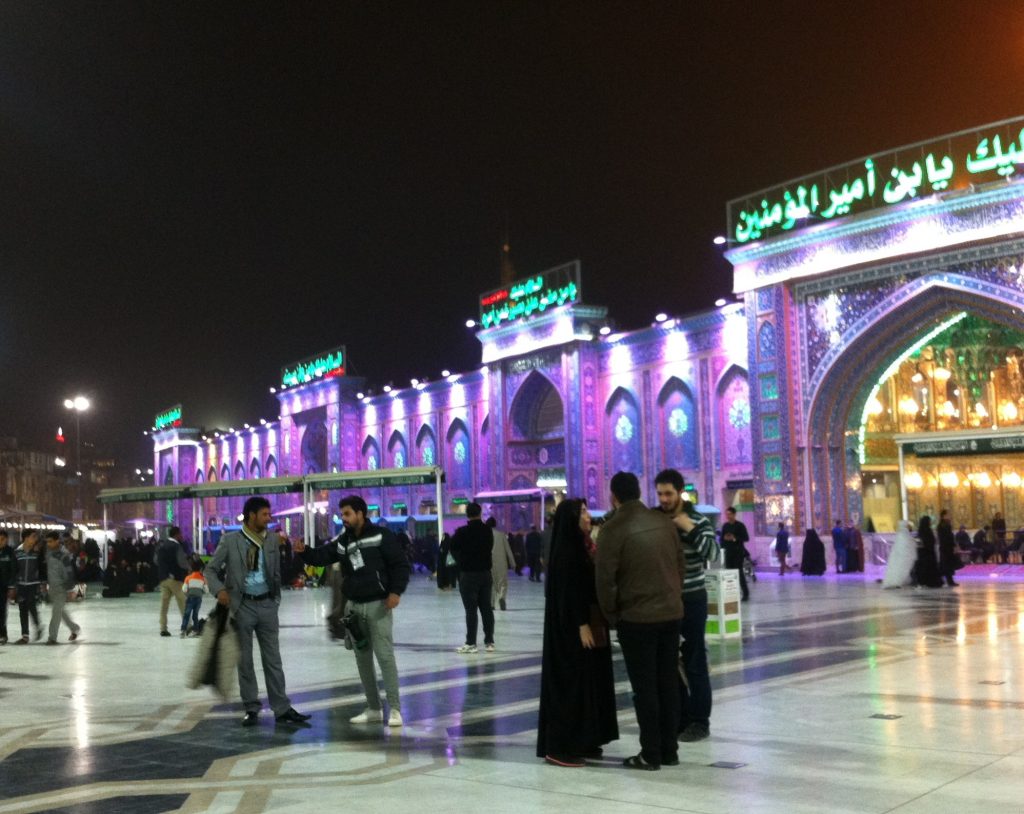 Today, I am gratified to find not only a much expanded hospital, but a new medical college. Founded only in 2004, Kerbala University’s Medical College has established itself as a leading facility in the country, graduating 800 doctors since it opened, with another 162 expecting to graduate this year.

When the college’s Dean Zubeydi and Professor Al-Naffi invite me to visit their classrooms to observe seminars underway, I accept without much expectation. ‘What can I learn watching a class in session?’, I think. Without interrupting the discussion underway, we take our seats behind a circle of 14 white-coated second year students. I can easily follow the discussion since it’s in English. (Medical education in Iraq has for many decades been conducted in English). But it is not the content that moves me, not the informality of the exchanges, not the predominance of women doing the talking, not even what the dean points out is the application of integrated teaching methods here. It is an ambiance, an atmosphere of devotion, determination and self respect. It is intangible, yet undeniable. It is more than remembering agony and pain, more than overcoming countless obstacles to reestablish and nourish this dialogue. (This is why I refer to these gatherings as ‘sacred assemblies’.) 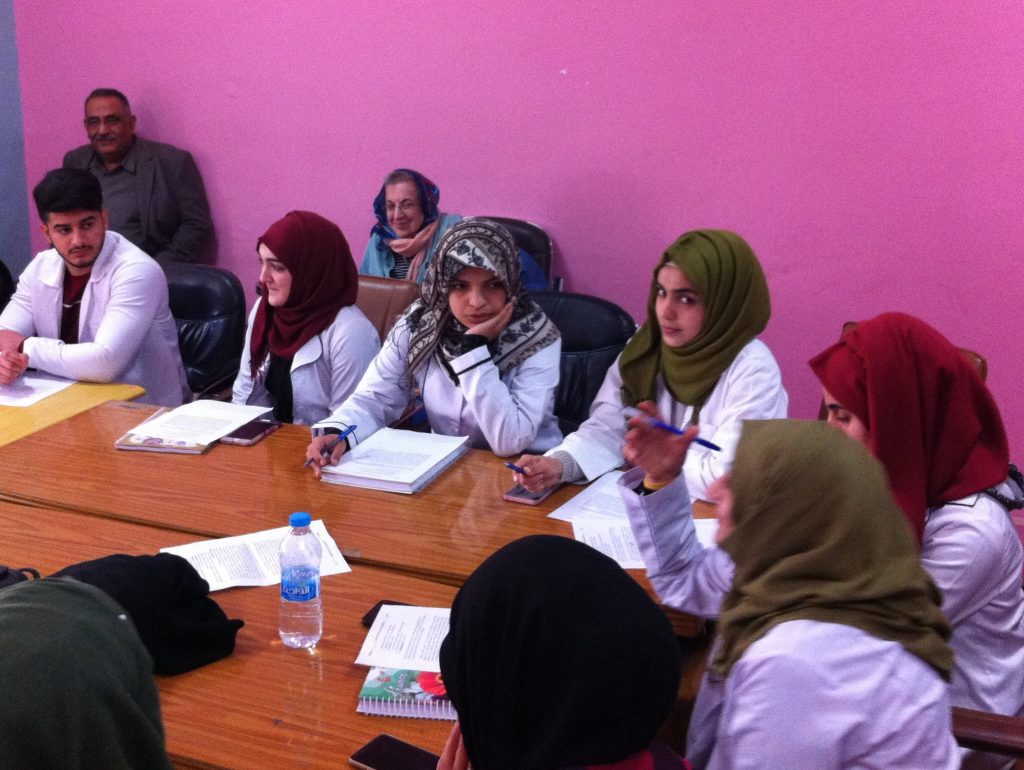 From long experience, often after missteps, I learned that a moment arrives when an anthropologist or journalist has to cease her constant questioning and put aside her notebook. This is one of those times. It resembles that huddle of chatting writers at Qaisairriyeh Hanash in Al-Mutanabbi Street– unbidden assemblies imbuing each member with their past, their present and their future.

I round off my stay in Kerbala with a revisit to Al-Hussein Mosque, Shrine of Imam Hussein. Here again I am content to watch and listen. I decide not to pray inside the magnificent mosque itself and instead to imbue the quiet, prayer-like devotion of the people around me outside. Strolling with other worshipers around the shrine, I admit I’m occasionally tempted to stop at a group dressed in Pushtu robes, or to engage with people I overhear speaking in Lebanese dialect. But I relax and allow myself to silently join the casual yet distinctly devotional mood embracing us all.

From the time when we arrived, near sunset, until well after dark, I and my companion circumambulate the mosque, gliding along the tiles of the vast esplanade. Small clusters of families, tour groups, a couple, a man and boy alone; they each move about with no apparent agenda beyond awaiting the call for salat al-‘isha, gazing from time to time at the stunning façade of the mosque, its myriad of lights accenting the green, white and black of Qur’anic inscriptions across the walls and arcades. Some visitors relax seated on the tile floor, snacking; others converse quietly as they wander through the open space.

As the sky darkens more worshipers arrive. I can distinguish people from South Asia, others from Sudan, still others from The Maghreb, South Africa and Nigeria; I suppose many Iranian worshipers move among us too.

Leaving this sacred assembly, these pilgrims will take with them the cultural and historical roots of their faith. 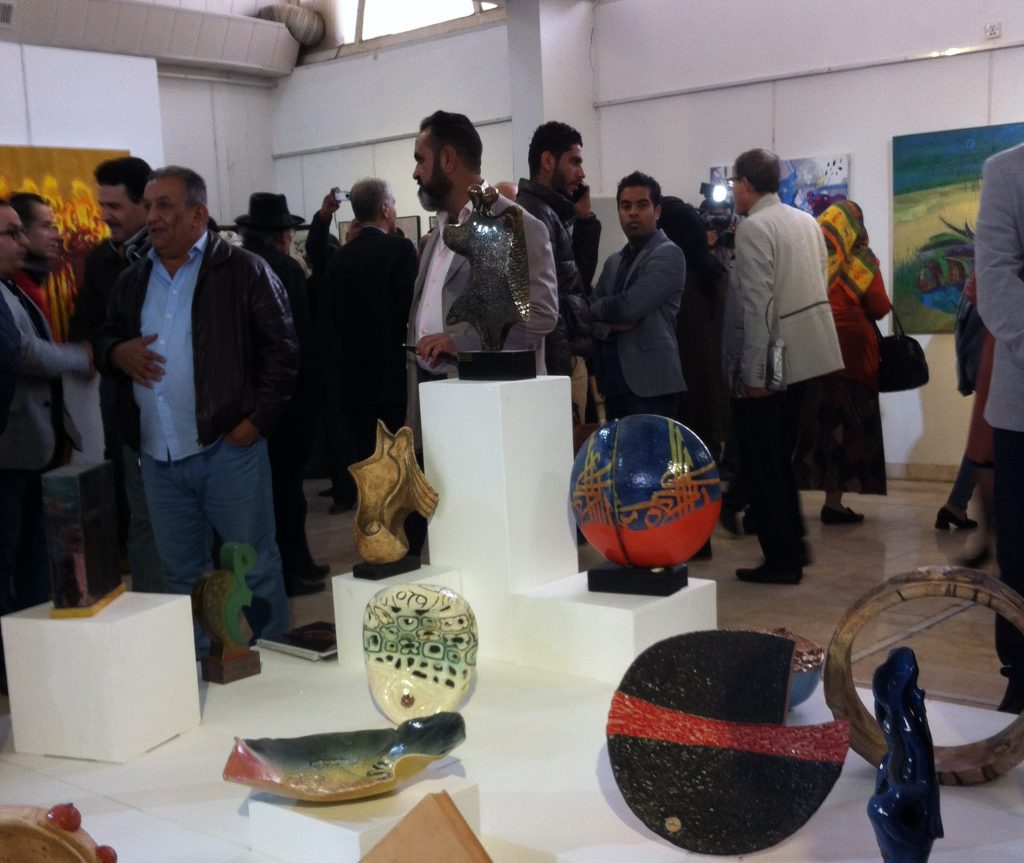 Those moments in Kerbala are in contrast to my attendance at the final public affair of my stay. It’s the opening of an art exhibition in the capital. While art galleries in Baghdad are much reduced, the Iraqi Plastic Artists Society is a well known locale for exhibitions, and today’s opening is a lively, celebratory event so dense with visitors that the paintings are difficult to see. More than one television crew is interviewing visitors as well as exhibiting artists. Children accompanying their parents are here as well. Eventually the crowd thins when visitors move outside to the garden where they are served snacks and drinks; a three centimeter thick colored catalogue is available without charge as well.

Slowly, cautiously, the risk is taken to do more than exist.

Barbara Nimri Aziz is a frequent contributor to Global Research.

Posted by Jaime C. on April 30, 2018 in Uncategorized and tagged Iraq.