Feature image the bombing of Yugoslavia

In order to justify aggression on Yugoslavia, NATO, Western allies, public medias, international humanitarian organizations and even Western intellectuals, were fabricating the story that Serbian forces ethnically cleansed more than 800 000 Albanians from Kosovo (they said 90 % of the total Albanian population were forced to leave Kosovo).

What really happened is that Albanians were leaving Kosovo via trains towards Macedonia and Albania fleeing from the armed conflict between Yugoslavian military/police against the [US-NATO supported] Kosovo Liberation Army (KLA) [UCK] a terrorist entity with links to Al Qaeda and organized crime. 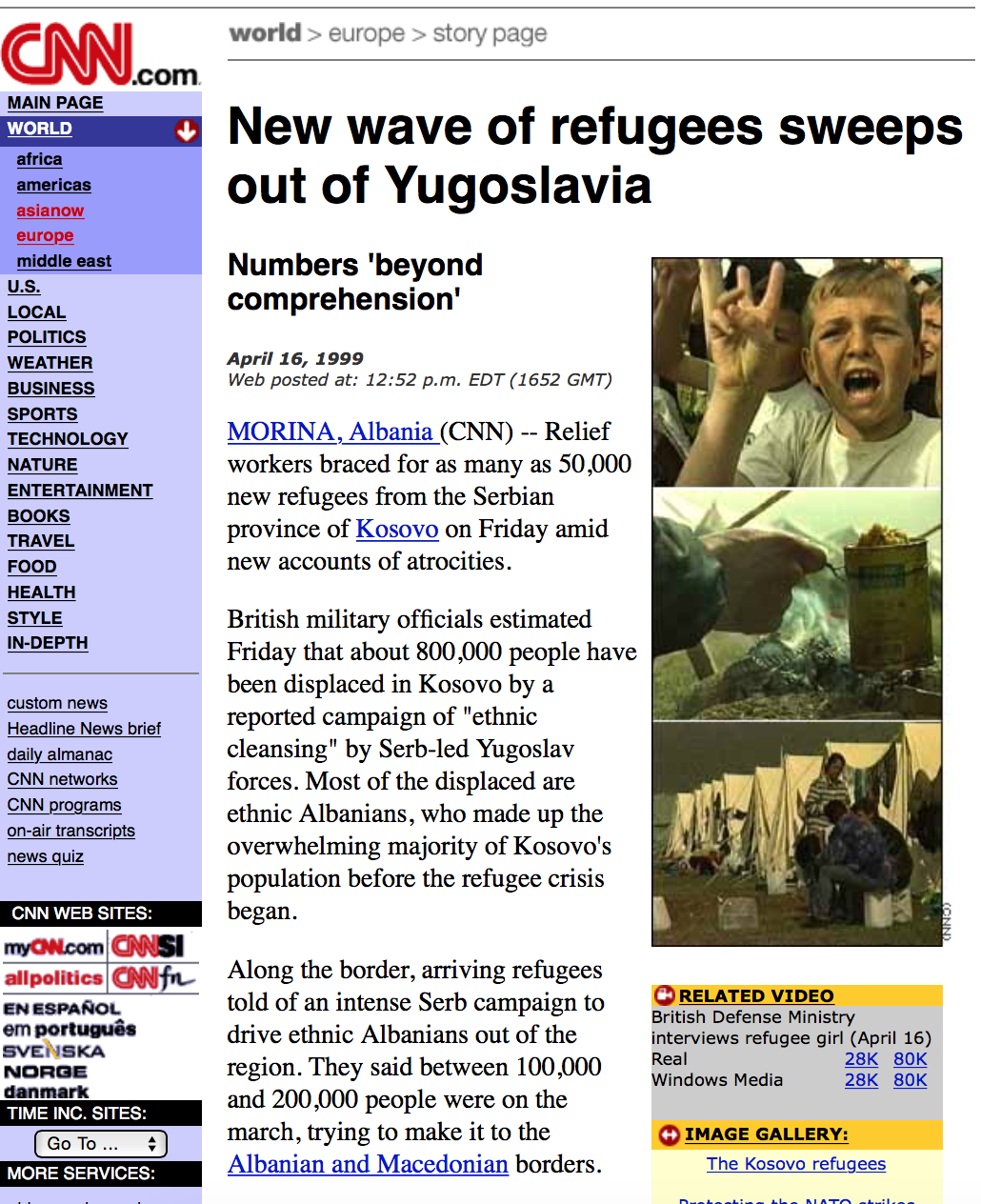 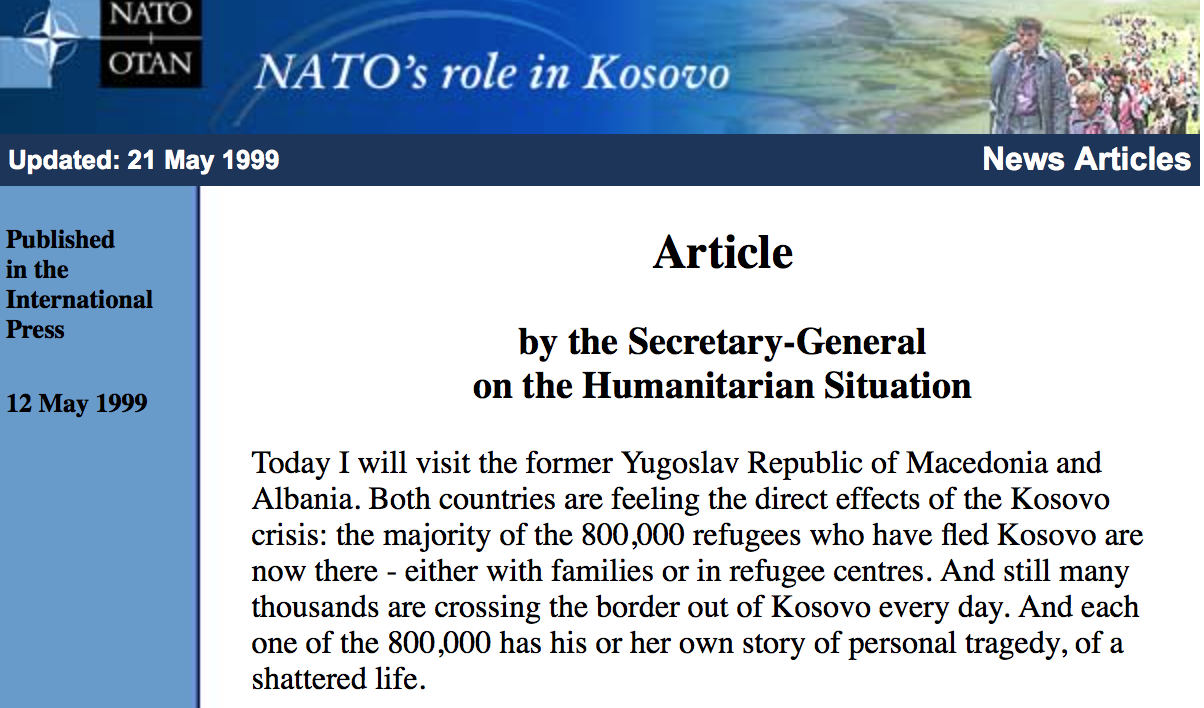 Most of the fights were done in villages with Albanian majority, because terrorists used their homes as military camps and strongholds. Thousands of Serbs and Albanians were used by terrorists as a live shield.

Image left: Insignia of the KLA

None of the Yugoslav authorities ordered the removal of the Albanians nor did the Serbs living in Kosovo. The individual crimes committed by Yugoslav forces were registered and legally processed by military and civilian authorities.

In order to frame a process of ethnic cleansing many of the Albanian refugees were leaving their homes during the day, after they have been recorded by CNN/BBC, they would then return to their homes at night. Operation “Horseshoe” coordinated by the CIA was proven to be at The Hague Tribunal as an attempt to blame Serbs for ethnic cleansing.

The Yugoslav Army and Police organized public kitchens for all citizens throughout Kosovo and Metohija, and provided regular humanitarian aid to all citizens. The first massive refugee columns of Albanians started leaving Kosovo after NATO’s aerial attacks, which caused the humanitarian catastrophe.

NATO was intentionally targeting Albanian villages, humanitarian aid deliveries and even refugee columns in order to trigger a humanitarian disaster, incriminating Serbs for it. [Similar procedure to what is now being applied in Syria]

In the city of Đakovica on 14th April 1999, NATO targeted Albanian refugee columns and killed 75 civilians;

In the city of Surdulica (my hometown), on 21 April 1999, NATO hit a civilian refugee shelter, where Serbian refugees from Croatia (Republic of Serbian Krajina) were settled, killing 10 people, of which 6 were children and mutilating 16.

On 27 April in the same city, NATO hit residential houses in the city center with 10 projectiles, killing 20 people, of which 12 were children, and mutilating more than 100 people.

Again in the same city, on 31 May 1999, NATO hit the hospital for respiratory diseases, hospital-gerontological center and refugee shelter, killing over-again 20 Serbian civilian refugees from Krajina and mutilating 88.

NATO also targeted Serbian refugees from Krajina in different parts of Serbia. In the city of Surdulica more than 500 residential civilian houses were destroyed during these 3 attacks, including the city waterworks, elementary school and kindergarten.

During the aggression and for several months after, the whole city didn’t have drinking water, me and my family were traveling on foot uphill for at least 8 km every days to get a potable water. After every explosion the roofs and the windows on houses were destroyed out of detonation, and the house walls were full of the missile fragments, we lived in a basement in constant fear for life throughout 78 days. 1/4 of all civilian objects in my hometown were destroyed by NATO bombing. On the 2 April 1999, NATO destroyed more than 500 civilian and religious objects in the city of Kuršumlija, including the monastery of the Holy Mother of God and St. Nicholas from 12 century…

On 30 May 1999 NATO hit the civilian Radio-television tower in the city of Vranje, using depleted uranium ammunition, the amount of measured radiation after the strike was 8 000 times higher than before the strike.

World’s average rate of malignant diseases is 2000 per 1 million people, in Serbia (without data from Kosovo) the average is 5500 per 1 million people, which is 2.7 times higher than the world’s average. In Serbia, cancer incidence rate grows 2 % per year, while in the rest of the world the incidence rate grows 0.6% per year. Death rate from leukemia has increased by  139% since 1999.

Environmental and biodiversity damage is irreversible.

NATO aggression on Yugoslavia in 1999, is known in the West only as aerial campaign, but this war was conducted along with joint land-based invasion against Yugoslavia from Albania and FYR Macedonia (operation Arrow). During the war, Yugoslavian Army was successfully defending its territory against joint land and air invasion on state border between Yugoslavia and Albania and Macedonia.

NATO used all available land and air artillery capacities, including strategic bombers B-1, B-52, airplanes F-16, A-10, and Apache helicopters, launching more than 40 000 projectiles and over 1000 cruise missiles. Despite enormous efforts and devastation, NATO and its allies couldn’t penetrate into Yugoslavian territory as planned, therefore Nobel Prize winner Martti Ahtisaari, threatened to flatten Belgrade and major Serbian cities and infrastructure objects by using strategic bombers all across Serbia. This threat made Serbian political leadership to sign Military Technical Agreement in Kumanovo on the 10th of June, 1999.

Radovan Spasic is a political scientist from Serbia.

Posted by Jaime C. on July 1, 2018 in Uncategorized and tagged NATO, Yugoslavia.