Hands Off Syria: We Can End The US War On Syria

The US war against Syria was one that people almost stopped. President Obama was unable to get Congress to authorize the war in 2013, but the Pentagon and foreign policy establishment, who have long wanted to control Syria, pushed forward with war anyway.

The people were right, and the military was wrong. The war on Syria never should have happened and now must end.

President Trump announced withdrawal from Syria this week. This creates an opportunity to end the war on Syria. We have work to do to make peace a reality. 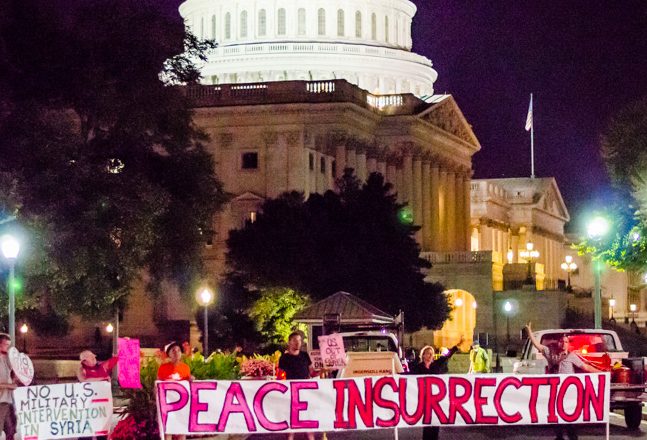 The People Almost Prevented the US War in Syria

In 2013, amidst highly-doubted, unproven allegations of a chemical attack by Syrian President Assad (debunked a year later), the threat of war escalated, and so did opposition to the war. Protests against an attack on Syria took place around the world. In the the US, people were in the streets, and speaking out at town halls. Obama was forced to bring the issue to Congress for authorization.

Congress was barraged with a Peace Insurrection encamped outside its doors, sit-ins in Congressional offices, and a massive number of phone calls with 499 to 1 opposing the war. Obama could not get the votes to support the war. Harry Reid surrendered to the public by never holding a vote.

The other superpower, the people, had stopped a war. Obama became the first president to announce a bombing campaign who was forced to back down by the people. But the victory would be temporary, neocons and militarists continued to push for war. Based on new fake terror fears, and false chemical attack allegations, the ‘humanitarian’ destruction of Syria proceeded.

WSWS described how the war escalated under Obama, writing, “The illegal US occupation of Syria, begun under the Obama administration in October 2015 without authorization from either the United Nations or the Syrian government.” There was a shift from CIA support for Al Qaeda-linked militias to war to bring down the Assad government. US troops coordinated a campaign of airstrikes that reduced the city of Raqqa and other Syrian communities to rubble. Amnesty International, after conducting field investigations, reported the US has committed war crimes in Syria. Vijay Prashad described the US creating “hell on Earth” in Syria.

Despite this, the US was losing the war in Syria. With Russia coming to the aid of its ally, Assad was not going to be removed.

Trump escalated and drove the US deeper into the Middle East quagmire betraying the non-interventionist base who elected him. The corporate media praised Trump was as ‘becoming president’ for bombing Syria based on another unproven chemical attack. Later, even General Mattis admitted there was no evidence tying Assad to chemical attacks.

Early this year, the Trump administration was talking about having a permanent presence in one-third of Syria with 30,000 Syrian Kurds as the ground forces, US air support and eight new US bases. Protests continued against the bombing of Syria throughout the spring in the US and around the world.

Now, as Andre Vltchek describes, the Syrian people have prevailed and most of the country is liberated. People are returning and rebuilding. 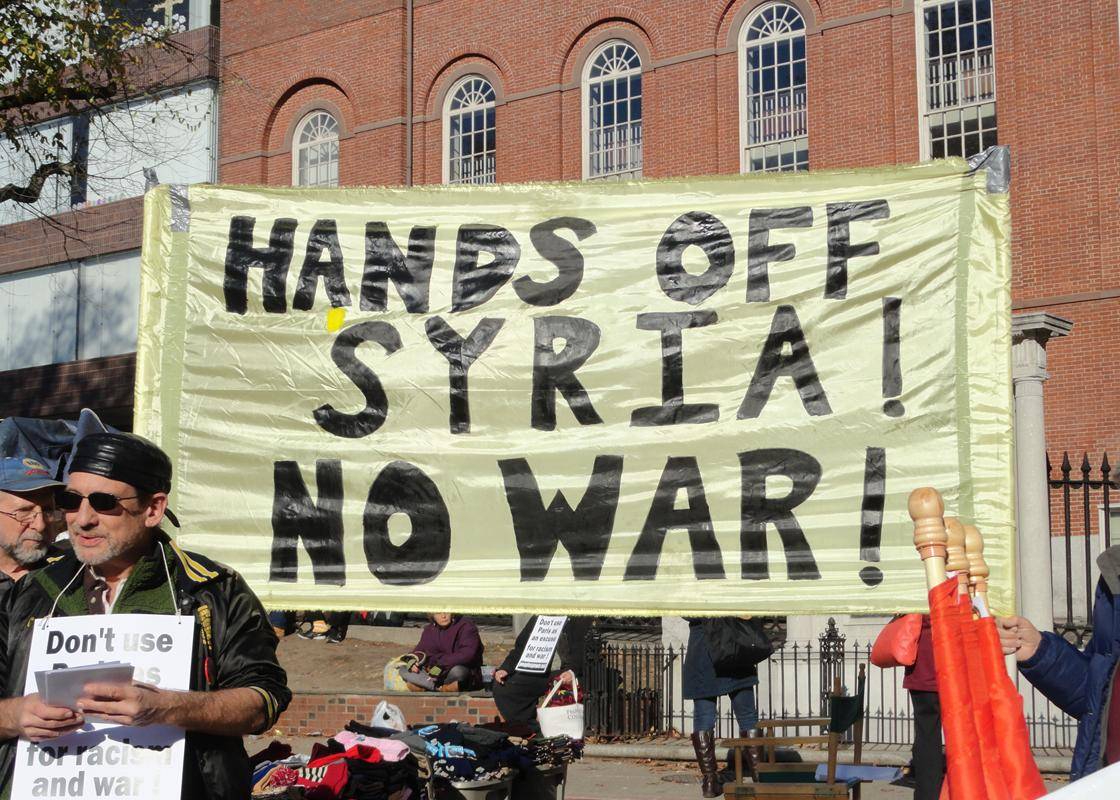 President Trump’s announcement that he is withdrawing from Syria over the next 60 to 100 days has been met with a firestorm of opposition. Trump tweeted on Wednesday, “We have defeated ISIS in Syria, my only reason for being there during the Trump Presidency.”

Russia is drawing down its military activities with Defense Minister Sergey Shoygu reporting Russia was carrying out 100 to 110 flights per day at its peak and now they do no more than two to four flights per week, chiefly for reconnaissance purposes. Putin agreed that ISIS had been defeated and supported Trump’s decision but cast doubt on Washington’s plans, saying, “We don’t see any signs of withdrawing US troops yet, but I concede that it is possible.”

There has been very little support for withdrawal from elected officials. Many Republicans and the corporate media are criticizing Trump. The first two Democrats to step forward to support the removal of troops were Rep. Ted Lieu, a frequent Trump critic who applauded the action, and Rep. Ro Khanna. But, the bi-partisan war Congress opposes Trump.

Secretary of Defense Mattis resigned after Trump’s announcement. In his resignation, he expressed disagreements with Trump over foreign policy. The media is mourning the exit of Mattis, neglecting his history as a likely war criminal who targeted civilians. Ray McGovern reminds us Mattis was famous for quipping, “It’s fun to shoot some people.”

Popular Resistance supports the withdrawal of troops from Syria.

We are not alone in supporting Trump’s withdrawal announcement. Medea Benjamin of CODE PINK described the withdrawal as “a positive contribution to the peace process,” urging “all foreign powers that have been involved in Syria’s destruction, including the United States, take responsibility for rebuilding this nation and providing assistance to the Syrian people, including the refugees, who have suffered so tragically for over seven years.”

Veterans for Peace supports the withdrawal saying the US has “no legal right to be [there] in the first place” and describing the brutal destruction caused by US bombs.

Black Alliance for Peace supports the withdrawal writing  the war”should have never been allowed in the first place.” They denounce the corporate press and members of the political duopoly for opposing the withdrawal. BAP also recognizes that the foreign policy establishment will fight this withdrawal and promises to work to end all US involvement in Syria and other nations. 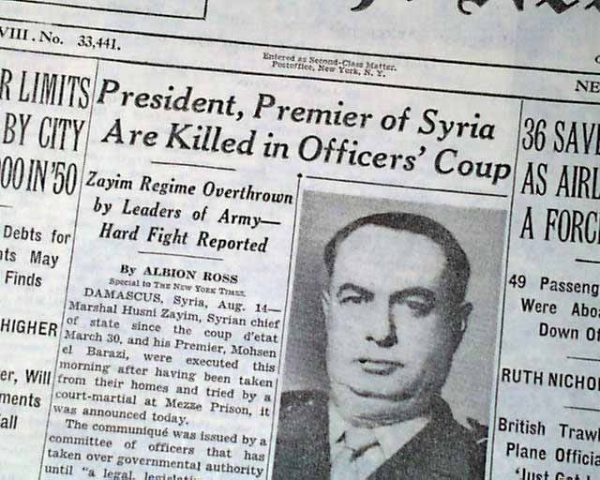 Image: New York Times reports the coup which overthrew the country’s democratically elected government. Stephen J. Meade, the U.S. assistant military attaché was a CIA officer, worked with the Syrian chief of staff, Husni Zaim, to plan a coup. The US was concerned about Syria’s stance on Israel, border disputes with Turkey, and oil pipelines, and worried that the left was growing in power and that the government was growing friendlier to the Soviet Union.

Will the Long History Of US Regime Change In Syria End?

Trump is being fought because the US has a long history of trying to control Syria dating back to the 1940s.  CIA documents from 1986 describe how the US could remove the Assad family.

While the bulk of destruction of Syria occurred during the Obama administration, plans for the current war and overthrowing Assad date back to the George W. Bush administration. A State Department cable, “Influencing the SARG In The End Of 2006”, examines strategies to bring about regime change in Syria.

This is not the first time President Trump said the war on Syria would be ending. He did so in March, but in April, Mattis announced expanding the US military in Syria. As Patrick Lawrence writes in Don’t Hold Your Breath on US Troop Withdrawal from Syria, “By September the Pentagon was saying. . .U.S. forces had to stay until Damascus and its political opponents achieved a full settlement.“

In response to Trump’s newest announcement, the Pentagon announced it will continue the air war in Syria. They would do so at least for as long as troops were on the ground, adding “As for anything post-US troops on the ground, we will not speculate on future operations.” The Pentagon has not given any details on a withdrawal timeline, citing “force protection and operational security reasons.”

Trump’s removal of US troops from Syria challenges the foreign policy establishment, which seemed to be planning a long-term presence in Syria. 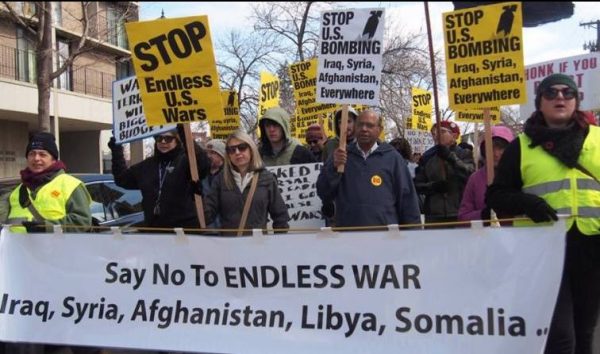 The People Must Ensure the End of the War on Syria

The peace movement should do all it can to support Trump’ call for withdrawal because he needs allies. Patrick Lawrence describes the experience thus far during the Trump administration:

“As Trump finishes his second year in office, the pattern is plain: This president can have all the foreign policy ideas he wants, but the Pentagon, State, the intelligence apparatus, and the rest of what some call ‘the deep state’ will either reverse, delay, or never implement any policy not to its liking.”

We saw this scenario play out earlier this month when Trump complained about the Pentagon’s out-of-control budget and pledged to cut it. As Lawrence points out, just days later the president met with Mattis and the chairmen of the House and Senate Armed Services Committee and announced that the three had agreed on a 2020 defense budget of $750 billion, a 5 percent increase.

Trump has made no progress on North Korea since their first meeting and has been prevented from making progress on positive relations with Russia. The foreign policy establishment of the Pentagon, State Department, Intelligence Agencies, Weapons Makers and Congressional hawks are in control. Trump will need all the help he can get to overcome them and withdraw from Syria.

We should urge Trump to be clear that ALL troops are leaving Syria. This should include not only the troops on the ground but the air force as well as private contractors. The CIA should also stop its secret war on Syria. And the US should leave the military bases it has built in Syria. Similarly, the movement should support Trump’s calls to withdraw from Afghanistan.

The US has done incredible damage to Syria and owes restitution, which is needed to help bring Syria back to normalcy.

Syria and Afghanistan join the list of failed and counterproductive US wars. These are more signs of a failing empire. The people of the United States must rise up to finish the job we started in 2013 — stop the war on Syria, a war that never should have occurred.