Since 1900, nearly 3 species of seed-bearing plants have disappeared per year ― 500 times faster than they would naturally.

The world’s seed-bearing plants have been disappearing at a rate of nearly 3 species a year since 1900 ― which is up to 500 times higher than would be expected as a result of natural forces alone, according to the largest survey yet of plant extinctions.

The project looked at more than 330,000 species and found that plants on islands and in the tropics were the most likely to be declared extinct. Trees, shrubs and other woody perennials had the highest probability of disappearing regardless of where they were located. The results were published on 10 June in Nature Ecology & Evolution1.

The study provides valuable hard evidence that will help with conservation efforts, says Stuart Pimm, a conservation scientist at Duke University in Durham, North Carolina. The survey included more plant species by an order of magnitude than any other study, he says. “Its results are enormously significant.”

The work stems from a database compiled by botanist Rafaël Govaerts at the Royal Botanic Gardens, Kew, in London. Govaerts started the database in 1988 to track the status of every known plant species. As part of that project, he mined the scientific literature and created a list of seed-bearing plant species that were ruled extinct, and noted which species scientists had deemed to be extinct but were later rediscovered.

In 2015, Govaerts teamed up with plant evolutionary biologist Aelys Humphreys at Stockholm University in Sweden and others to analyse the data. They compared extinction rates across different regions and characteristics such as whether the plants were annuals that regrow from seed each year or perennials that endure year after year.

The Extinction of Animal and Plant Species

The researchers found that about 1,234 species had been reported extinct since the publication of Carl Linnaeus’s compendium of plant species, Species Plantarum, in 1753. But more than half of those species were either rediscovered or reclassified as another living species, meaning 571 are still presumed extinct. 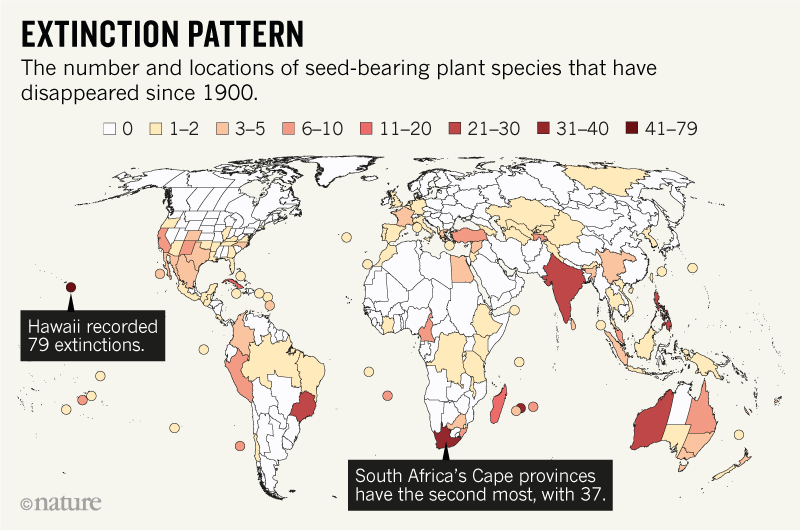 A map of plant extinctions produced by the team shows that flora in areas of high biodiversity and burgeoning human populations, such as Madagascar, the Brazilian rainforests, India and South Africa, are most at risk (see ‘Extinction pattern’). Humphreys says that the rates of extinction in the tropics is beyond what researchers expect, even when they account for the increased diversity of species in those habitats. And islands are particularly sensitive because they are likely to contain species found nowhere else in the world and are especially susceptible to environmental changes, says Humphreys.

Even though the researchers carefully curated the plant extinction database, the study’s numbers are almost certainly an underestimate of the problem, says Jurriaan de Vos, a phylogeneticist at the University of Basel in Switzerland. Some plant species are “functionally extinct”, he notes, and are present only in botanical gardens or in such small numbers in the wild that researchers don’t expect the population to survive.

“You can decimate a population or reduce a population of a thousand down to one and the thing is still not extinct,” says de Vos. “But it doesn’t mean that it’s all ok.”

And few researchers have the money or time to launch a comprehensive effort to find a plant species that they think might have gone extinct. Landscapes can change a lot in a relatively short amount of time, so it’s difficult to know whether a species has truly disappeared without an extensive follow-up, de Vos says.

He recalls his own hunt through Cameroon to gather species of yellow-flowering begonias for DNA sequencing. De Vos visited several sites where records indicated that other researchers had collected the plants in decades past. But sometimes he would arrive at a site only to find a radically changed landscape.

“You know that it’s a rainforest species, but you’re standing in a city,” de Vos says. “Then you realize just how massive the scale of destruction or land-use change has been over the past 50 or 80 or 100 years.”

Featured image: Hawaii (pictured) has the highest recorded loss of seed-bearing plant species of anywhere in the world since 1900.Credit: Design Pics/Shutterstock

The original source of this article is nature
Copyright © Heidi Ledford, nature, 2019