UK denying Maduro access to Venezuelan gold is not only THEFT, it’s MURDER of London’s reputation as trusted financial center

George Galloway
was a member of the British Parliament for nearly 30 years. He presents TV and radio shows (including on RT). He is a film-maker, writer and a renowned orator. Follow him on Twitter @georgegalloway

©  Getty Images / Vitoria Holdings LLC
The standards are poor at the Bank of England these days, I don’t know why anyone would want to do business with them. George Galloway gives British banking, and justice, a triple-fail rating.

It used to be “a thing” when I was growing up. “As safe as the Bank of England” was the acme of trustworthiness and security. But as Venezuela – and any other Global South country foolish enough to entrust the British with their sovereign wealth just found out in the High Court in London – the Bank of England isn’t any longer safe at all.

Almost a billion dollars worth of Venzuelan gold bullion has just been stolen by the British government, theft has just been legalized, and the thieves didn’t even bother to wear a mask. 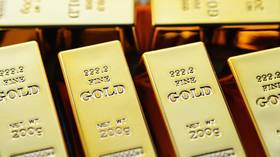 Instead, a man off the street in Caracas by the name of Juan Guaido – who has not only never been elected to power in Venezuela, he’s no longer even elected as the leader of the opposition – is the legal owner of the gold, says Justice Alice-in-Wonderland. After all, words mean whatever the British government wants them to mean.

The elected president of Venezuela, Nicolas Maduro, is recognized by the great majority of countries in the world. More importantly, his government is recognized at the United Nations. It is not true, as the British government told the High Court, that they “do not recognize” the Maduro government – they recognize it every day at the UN, in discussions in the canteen as well as in the chamber.

Moreover, it is the principle of British diplomacy that they “recognize” whomsoever is in effective control of a territory – whether they like them or not. Though, come to think of it, they did breach that “principle” once before – when they continued to recognize the Cambodian genocidal murderer Pol Pot  and insist that Comrade Number 1 remains in his seat in New York long after he was actually overthrown and while the mountain of corpses in Cambodia were being counted.

By any standards, Maduro is in effective control of Venezuela and Juan Guaido is not. Maduro controls every square inch of Venezuela, is the elected president, is recognized by the United Nations and by most countries in the world. Guaido is not elected, is not recognized by the United Nations, nor by most countries in the world and doesn’t control one single inch of Venezuelan territory. But he is now the proud owner of the gold in the Bank of England. It makes the Great Train Robbery look like a mere bagatelle, Guaido makes the Thief of Baghdad look like an amateur. It is the greatest single act of theft ever to take place on British soil. And that’s saying something.

ALSO ON RT.COMMystery of the Venezuelan gold: Bank of England is independent of UK govt – but not of foreign govtBut away from the scene of the crime, away from Venezuela, British officials in their ivory tower should take note. It wasn’t just theft which took place in the Strand this week – it was murder. The murder of London’s reputation as a financial center you can trust.

Certainly, any sovereign government which has invested its sovereign wealth in London should examine their head if not the current state of their balance. This decision has given a green light to the Pirates of the Caribbean, and you could be next. Fall out with the British government and they can now hand all your country’s wealth they can grab, over to your opposition, however discredited.

Quite a day’s work in financial standards, a triple-A fail.

If I ever won the National Lottery (which I don’t enter) the last place on Earth that I would deposit my millions would be in London. Standards here just went down the rabbit-hole and will never re-emerge. The City of London has fallen.

When I was young I told my Irish grandfather that the teacher had told me that the British had an empire so vast that the Sun never set upon it. He answered “that’s because God would never trust the British in the dark.” I knew he was telling the truth. And now so does Venezuela.