It would seem a logical step, at least from an existential perspective: to ban something so utterly horrendous to life; to forbid its use in any circumstances, whatever rationale employed to justify its use. But the nuclear weapon has its admirers.  There are those who continue to worship its sovereign properties, and those who leave gifts at the shrine of extended deterrence.  Be wary, they say, of the abolitionists.

The 75th anniversary of the Hiroshima and Nagasaki bombings should have encouraged much reflection on current attitudes to the United Nations Treaty on the Prohibition of Nuclear Weapons.  Passed on July 7, 2017, it has become a focal point for advocates of a nuclear-weapons free world, and a source of irritation for nuclear weapons states who are not only dragging their feet but going in the opposite direction.

Increased interest in the Nuclear Weapons Ban Treaty is not accidental.  Jayantha Dhanapala, the second director of the United Nations Institute for Disarmament Research, considered the document as arising from an unruly environment.  “In the nuclear field, we are almost back to the years immediately after the Second World War, when rules for the nuclear age had yet to be developed.”  He warned that humanity risked deluding itself into thinking “that war between nuclear-weapon states is a malady of the past, no longer deserving attention.”

Dhanapala sketches the fault line in the nuclear disarmament debate.  Nuclear Weapons States (NWS) and their allies face non-nuclear-weapon states (NNWS), both camps supposedly harbouring the same objective of eliminating nuclear weapons.  Both, however, make off from different stations: the NWS group insisting on “first achieving security and then nuclear disarmament”; the NNWS group preferring to reach an agreement to banning nuclear weapons “followed by its gradual implementation.”  The outcome of such different positions is clear: not a single nuclear weapons power has joined the regime, as they remain in love with their nukes, while all 43 ratifying states, to date, lack them.

The strangest spectacle in this disagreement is provided by those powers lacking nuclear weapons but relieved about those powers in guardianship that do.  The security argument prevails, formally under that fanciful but dangerous notion that an “umbrella of extended nuclear deterrence” exists to provide comfort.  For that reason Japan, despite being a noisy voice regarding the non-use and eventual elimination of nuclear weapons, has refused to endorse the weapons ban.  Hiroshima’s Mayor Kazumi Matsui will have none of it, and took the commemorative occasion to encourage the Japanese government to abandon that position.

“Hiroshima considers it our duty to build in civil society a consensus that the people of the world must unite to achieve nuclear weapons abolition and lasting world peace.”

At Nagasaki, similar sentiments were expressed by Mayor Tomihisa Taue, who found it “incomprehensible” that Japan’s treaty signature had been withheld.  He noted his concern that the appetite for nuclear disarmament had apparently been lost in recent years. Both the United States and Russia had placed the Intermediate-Range Nuclear Forces Treaty on the rubbish tip of history.  “As a result, the threat of nuclear weapons being used is increasingly becoming real.”  Despite the sterling efforts of the atomic bomb survivors (the hibakusha) to make Nagasaki the final place of such a tragedy, “the true horror of nuclear weapons has not yet been adequately conveyed to the world at large”.

“We Stand on the Precipice of History”: The Nuclear Weapons Ban Treaty Talks. “Nukes are Illegitimate, Immoral and Illegal” 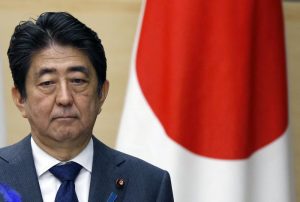 Japan’s Prime Minister Shinzo Abe has dismissed the treaty as pie in the sky nonsense, showing that the abolition of nuclear weapons remains a dream kept symbolically necessary but practically unrealisable.  This serves ceremonial relevance, the sort of cant that has governed disarmament policies since the race for the nuke got away.

While essential to the cult of Japanese victimhood as the only country whose citizens suffered such bombings, nuclear weapons remained valuable even as these commemorations took place.

“The Treaty on the Prohibition of Nuclear Weapons,” Abe explained dismissively, “was adopted without taking into consideration the reality of the harsh national security environment.”

Japan continued to face the threats posed to modernised nuclear weapons programmes from “neighbouring countries in the region.”

Foreign Minister Taro Kono, in justifying Japan’s continued refusal to append its signature, emphasised the divisions between the various schools of thought.  There were those testing disagreements between nuclear weapons states and non-nuclear nations.  There were those within non-nuclear states.  Rather deviously, Kono suggested that Japan might play a bridging role, seeking “common ground” between the camps that would lead to nuclear disarmament and abolition.

Australia, ever willing to deputise for the US in the Asia Pacific, has also shown marked reluctance to stigmatise the nuke.  Few can forget its role as foiled spoiler in the UN working group on nuclear disarmament in 2016.  Australian diplomats made it clear that they had no interest in seeing any document banning nuclear weapons emerge from what they hoped would be a futile talking shop.  The attitudes of Australian officials in the group was exposed in documents obtained under Freedom of Information by the International Campaign to Abolish Nuclear Weapons (ICAN).  “So long as the threat of nuclear attack and coercion exists,” states one document from foreign ministry officials, “US extended deterrence will serve Australia’s fundamental national security interests.”  Wishing to be the vibrant dissenters at the party, they promised “a strong alternative viewpoint, notably against those states who wish to push a near-term ban treaty.”

During the course of negotiations, Australian officials thought it necessary to remain in “close contact” with Washington “about our shared concerns” on the working group’s disturbing move towards recommending “negotiations on a ‘ban treaty’”.  It was good of them, seeing as the United States had boycotted the talks.  At stages, concerns were noted about the “humanitarianism” being pursued in the discussions – because you would not want that when discussing weapons of extermination.

In 2017, John Quinn, Australia’s ambassador for Disarmament and Permanent Representative of Australia to the United Nations, delivered a classic display of repudiation and approbation on nuclear weapons.  There was the mandatory mention: Australia shared “the widespread commitment to achieve a world free of nuclear weapons.”  But the nuclear weapons prohibition treaty was not the way to go about it.  The humanitarian impulses behind the document had deepened division (that word again), “created damaging ambiguities” and creating a rival forum on disarmament.  The significance of Australia’s rejection of the treaty – and here, the gloves come off – is that it “seeks to delegitimise extended deterrence.  The ban treaty will not advance nuclear disarmament or security.”

This is not a position that shows any sign of altering. “Australia does not support the ‘ban treaty’ which we believe would not eliminate a single nuclear weapon,” states the Department of Foreign Affairs and Trade.  Sounding much like Abe, it mocks the document for rejecting “the realities of the global security environment”.  The treaty lacks the security assurances found in traditional mechanisms supplied by the Nuclear Non-Proliferation Treaty and “would be inconsistent with our US alliance obligations.”

It follows that those claiming a normative shift in the ban treaty towards stigmatising the use of such weapons have their work cut out for them.  In some cases, the more vigorous opposition has not even come from the expected quarter.  Nuclear weapons states have simply refused to abandon their crown jewels, leaving the loudest barking against the ban treaty to their faithful, deluded allies who cling, desperately, to the fable of extended nuclear deterrence.

Featured image is from the Union of Concerned Scientists