Since March of this year the United States has been plunged into the worst outbreak of an infectious viral disease since the influenza pandemic of 1918-1920.

The impact of the COVID-19 outbreaks beginning in February and March has resulted in the closure of many production and service facilities throughout the country. Consequently, these events have rendered millions of workers unemployed.

Hospitals and educational institutions are overburdened with the novel virus since it presents profound challenges on how to address the disease through healthcare and the necessity of the resumption of courses whether held in-person or online. Absent of a vaccine and effective treatment, public apprehension related to the resumption of large gatherings whether in the workplace, schools, sports, entertainment and lodging will hamper the ability of millions of working people to earn a living.

Without jobs households will be unable to pay their rents, mortgages and property taxes placing them in foreclosure and evictions statuses. These inevitable consequences of high levels of joblessness are already being witnessed around the U.S.

The Cares Act passed in March by both the House of Representatives and the Senate and later signed by President Donald Trump which was implemented purportedly to assist businesses, institutions and working families, in reality provided the bulk of this public funding to ruling class interests such as multi-national corporations, banks and allied groupings. The one-time payment of $1,200 per person and even lesser amounts for those designated as dependents, was also bolstered by an enhanced payment of $600 per week for the unemployed.

However, the Senate rejected the proposed Heroes Act which would have granted additional assistance over an extended period of time. In addition, a renewal of the Cares Act has not materialized after the collapse of negotiations between the Democratic-dominated House and the Republican majority Senate. Trump’s executive orders related to COVID-19 assistance declared on August 7, raises more questions than answers since the already beleaguered state governments are required to provide a percentage of the resources needed restore only $400 in jobless benefits, a slashing of enhanced benefits by one-third.

As the moratoriums imposed on evictions by various states and the federal government in response to the economic crisis spawned by the pandemic, are being lifted in numerous states, people are being ejected from their homes at a rapidly rising rate. The state governmental structures and the federal housing authorities have not developed programs which can avoid a socially catastrophic situation. 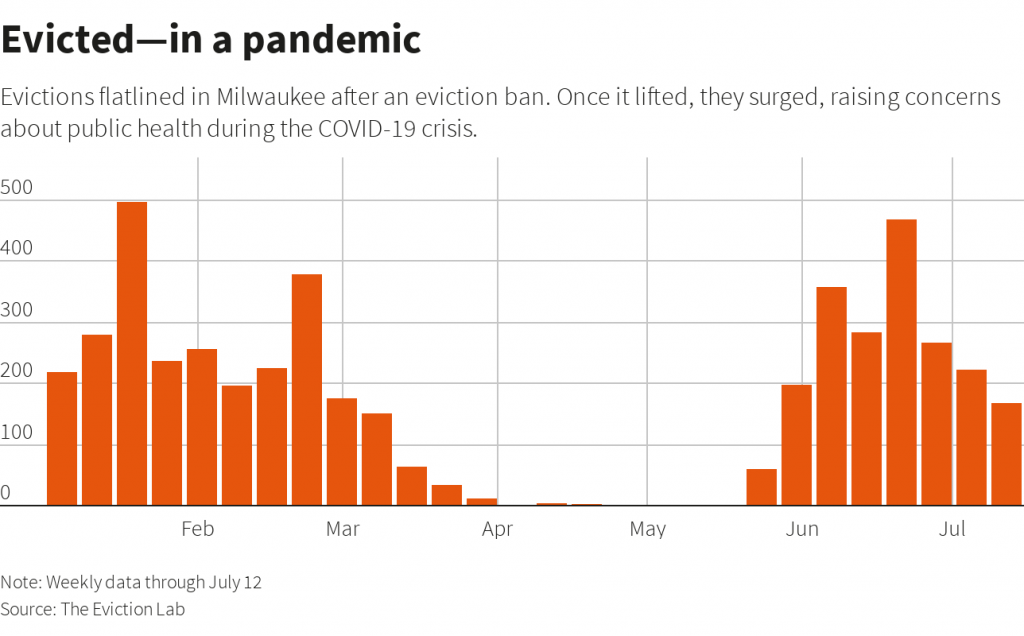 Princeton University has established an Eviction Lab which attempts to track the number of displacements nationwide. Although this research center provides valuable data on the quantitative growth of the evictions, they admit to being limited due to the lack of reporting by numerous municipalities, county and state governments.

Through tracking data from 17 different cities, the Eviction Lab says that since the advent of the COVID-19 pandemic some 34,699 notices to vacate have been filed by landlords. The public health situation has exacerbated the existing housing crisis which stems from the structural inequalities inherent within the modern-day capitalist system.

The Eviction Lab says of the present conjuncture:

“Current policy responses to the pandemic may be insufficient to prevent a surge in evictions. CARES Act stimulus payments and unemployment insurance–when accessible–will provide families with some support, but in many cases not enough to make ends meet. Some states have passed temporary eviction moratoria, which the Eviction Lab is tracking in the COVID-19 Housing Policy Scorecard, and localities across the country have introduced additional measures. Once these measures expire, however, millions of renters will owe significant amounts of back rent. For many, a displacement and eviction crisis will follow the public health crisis.”

In the state of California, the most populous in the country, the pandemic has continued to grow particularly in the southern regions. Reports from the state indicate that landlords are locking tenants out of their homes for the failure to pay rent arrears. Even though restrictions on the ability to evict have been enacted, aggressive actions by property owners are forcing many people to move without adequate funds to find new homes. (See this)

Ananya Roy, the Director of the Institute on Inequality and Democracy at the University of California at Los Angeles (UCLA) told the Guardian newspaper in late July that:

“When talking about the scale of eviction and mass displacement, it’s pretty unimaginable. This will be worse than the Great Depression.”

The state of South Carolina was highlighted during the Democratic primary elections as representing a turning point in the prospects of presumptive nominee former Vice President Joe Biden of Delaware. The African American voters of South Carolina were hailed as providing Biden the necessary victory needed to continue in the race against Senator Bernie Sanders of Vermont. 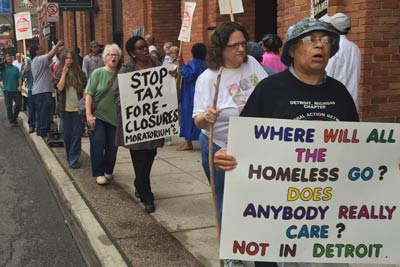 Nevertheless, there is far less focus on South Carolina in recent weeks which is now a focal point for the national eviction crisis. Even prior to the pandemic, the state had the highest eviction rate of any of its counterparts by a two-to-one margin according to data from the Eviction Lab at Princeton.

These rates of evictions are clearly related to the level of poverty in the state, 16.6%, which is moderately higher than the national average, at 14.6. Among African Americans and people of Latin American descent the rates are far higher at 26.7 and 28.6 percentages of the overall population respectively.

A report published by NBC News on August 10 says of the crisis in this Southern state:

“In South Carolina alone, 52 percent of renter households can’t pay their rent and are at risk of eviction, according to an analysis of census data by the consulting firm Stout Risius Ross. About 185,000 evictions could be filed in the state over the next four months.”

Michigan was one of the hardest hit states related to the housing crisis which arose during the Great Recession beginning in 2007. Tens of thousands of foreclosures and evictions occurred while successive administrations failed to impose a moratorium.

Governor Gretchen Whitmer, once considered a possible Vice Presidential candidate pick for Biden, imposed strict measures related to the mitigation of the pandemic. There was a statewide moratorium on evictions along with the mandated closings of schools, universities, restaurants and all non-essential businesses.

Many of these policies served to reduce the rate of infections and deaths in the state up until June. Under pressure by right-wing elements in the State House and Senate along with their constituencies, Whitmer relented by reducing restrictions and allowing the opening of sectors of the economy. By August, the rates of infections were rapidly increasing with thousands of new cases confirmed every week.

Whitmer lifted the moratorium on evictions suggesting that a renter assistance program was adequate to prevent mass evictions and foreclosures. Yet the failure by the state to properly manage the unemployment insurance program sheds must doubt in the public mind about its capacity to provide aid for distressed renters and homeowners.

The Moratorium NOW! Coalition and other anti-eviction organizations are planning actions to demand the re-enactment of the statewide moratorium. The Chief Judge of 36th District Court imposed a moratorium covering the Detroit area, the largest municipality in Michigan which is set to expire on August 17 with the re-opening of the in-house legal proceedings downtown.

In the short term the only remedy to the worsening housing crisis is the imposition of a halt to all evictions as well as programs aimed at rent and mortgage forgiveness. Otherwise the large-scale displacement across the U.S. will make any effective plans to control of the spread of COVID-19 impossible.

The establishment of homeless encampments already exists in California and other regions of the U.S. These makeshift settlements are growing while making mitigation efforts such as the wearing of masks, virus testing, contract tracing and social distancing even more difficult.

Under capitalism, the housing crisis has been a by-product of the growth of cities and the impoverishment of working people. These problems developed in England and the European continent in the time of Karl Marx and Frederick Engels during the 19th century.

“Modern natural science has proved that the so-called ‘poor districts’ in which the workers are crowded together are the breeding places of all those epidemics which from time to time afflict our towns. Cholera, typhus, typhoid fever, small-pox and other ravaging diseases spread their germs in the pestilential air and the poisoned water of these working-class quarters. In these districts, the germs hardly ever die out completely, and as soon as circumstances permit it they develop into epidemics and then spread beyond their breeding places also into the more airy and healthy parts of the town inhabited by the capitalists. Capitalist rule cannot allow itself the pleasure of creating epidemic diseases among the working class with impunity; the consequences fall back on it and the angel of death rages in its ranks as ruthlessly as in the ranks of the workers.” (See this)

Even though it is necessary for the ruling class to address the combined crises of housing and public health, the desire for the maximum acquisition of profit from the working class interferes with these imperatives. Only the direct intervention of the masses of working people can the winning of moratoriums and rent forgiveness be secured.