There was very little controversial about it.  A featured blog post in the Oxford Political Review, authored in April by Joshua Krook, suggested that COVID-19 had brought a host of benefits for big tech companies.  Isolation ushered people towards online platforms.  Engagement on such platforms had increased dramatically.

Names were not mentioned.  Krook’s then employer, the Australian Public Service, made no appearance in the text.  Tech entities were not outed, though Krook noted, in general, how “big tech companies” have been “pursuing the attention economy”, seeking to get “all our attention at all times.”  With COVID-19, this had been achieved.  “People are trapped indoors, at home, on their devices at all times, with nowhere to go.”  Krook’s tone did come across as a touch judgmental, suggesting that replacing “human connection with technology has never felt so nakedly negative.”  He likened big tech entities to spouses who know “everything about you.”  By giving them information about yourself, a loss of free will is perpetrated precisely “because the person, or company, knows so much about you.”

It took three months for Krook to get the call.  The managers of the APS took issue with the post.  It’s pessimism might damage the government’s relationship with the technology industry.  In Krook’s words to the Guardian, “the problem was that in talking about the big tech companies, we risked damaging the relationship the government has with big tech companies and that when we go and do public-private partnerships, they could Google my name, find my article and then refuse to work with us.”  Had the article been ingratiating – “positive about the big tech companies” – it would have been entirely permissible.  His options were starkly simple: remove the post or face termination of employment.  Any future pieces would have to go through the censoring scissors of the service. 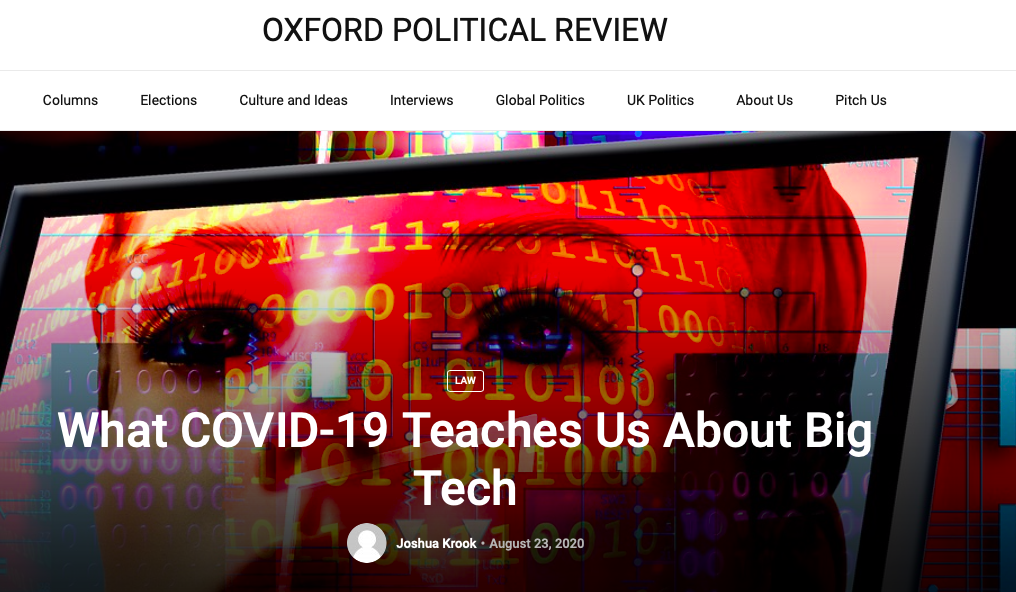 Video: Facebook and the New Face of Regime Change

What followed was the usual pattern.  The cold sweat of initial alarm; a quick request to the Oxford Political Review that the blog post be removed.  Deletion.  Then, a reconsideration of matters, the growth of a backbone to resist: quitting the job in the public sector and talking about civil service censorship.

As Krook explained in the Oxford Political Review,

“I resigned from my job in the government because I fundamentally disagree with the decision.  The Australian government should not be involved in censoring personal blog posts.  Public servants should be able to criticize private companies, including big tech companies.  There is no conflict of interest.  Freedom of speech is fundamental to a thriving, secular democracy.”

It pays to know what creatures you are working for, and what strange armour they insist on wearing when they deal with expression.  Know their values and code of conduct, because they are bound to be conversely related to what is actually intended.  Ideas will only be permitted in such an ecosystem if they are expressed with respect, which usually means causing no offense to the thick and unimaginative.  What is challenging is bound to be offensive; what is audaciously defying is bound to rub the dullards the wrong way.

The APS, for instance, has a code of conduct which deals with “employees as citizens”.  This has a sinister edge to it.  The APS acknowledges in Section 6 of the Code that employees are citizens and members of the community but “the right to serve the community as APS employees comes with certain responsibilities.”  Central to the point is a notion that has been stretched and mangled in punishing supposed transgressions by APS employees.  Responsibilities, for instance, “include maintaining confidence of the community in the capacity of the APS, and each member to it, to undertake their duties professionally and impartially.”  This comes terribly close to having no opinions, or at least the sort you can legitimately express.

The section further gives clues as to what an APS employee should, or should not do.  Be careful making comments in an unofficial capacity (no mention of the healthy thoughts of such a person as an engaged private citizen).  Be wary of participating in political activities, participating in acts that might generate a conflict of interest, be cautious when working overseas and when being “identifiable as an APS employee.”

Naturally, such elastic codes are drafted in ways that suggest openness and fairness, while coldly repudiating them.  There is, for instance, a tentative nod to the engagement of APS employees “in robust discussion … as an important part of open government.”  But the lid is tightly shut on the issue of public comments, which must conform to the “APS Values, Employment Principles and the Code.”  And public comments are broad indeed, covering public speech, online media including blogs and social media networking sites.

Michaela Banerji, formerly an employee of the Australian Department of Immigration and Citizenship, found at much personal cost that tweeting critically about government policy on refugees, even anonymously, was sufficient to get her sacked.  Her heroic effort to bring her messages and opinions within the realms of Australia’s implied right to freedom of communication on political subjects was snootily dismissed by the country’s highest court in 2019.  The implied right was not a personal one, intoned the High Court judges, but “a restriction on legislative power which arises as a necessary implication” on construing various sections of the Australian Constitution “and as such, extends only so far as is necessary to preserve and protect the system of representative and responsible government mandated by the Constitution.”

Justice James Edelman went so far as to claim that the APS Code did not turn “public servants into lonely ghosts” but conceded that it would cast “a powerful chill over political communication.”  All that interested the judges, however, was that Banerji had been given a proportionate penalty balanced against preserving a neutral public service.  Had Krook dared test the waters of litigation, it would have been grimly interesting how the High Court might have distinguished his case to that of Banerji’s, given that he expressed no criticism in the post of the government or government policy.

The Krook affair also reveals another disturbing trend.  With all that froth and babble about regulators keen to rein in the power of Silicon Valley, we have an object lesson about how keen the Australian government is to stay in the warming bed of big tech.  Google, Facebook and other representatives will be delighted by this stinging hypocrisy.  Public servants have been crudely warned: do not write pieces, however general, about the consequences of the COVID-19 tech world and its delighted Silicon Valley stalwarts.