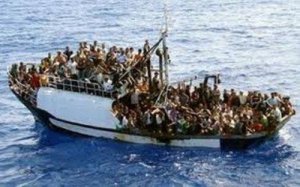 Thousands of refugees and asylum seekers head for safe havens daily – a human flood entering Europe, risking life and limb to get there. Why?

According to a UNHCR report,  60 million people were forcibly displaced by end of 2014. Globally one in every 122 people are asylum seekers, refugees or internally displaced persons. More than half the world’s refugees are children.

On August 28, the Office of the UN High Commissioner for Refugees (UNHCR) said over 300,000 refugees and asylum seekers crossed the Mediterranean to reach Europe so far this year – greatly exceeding 2014’s 219,000 total, a human flood likely to approach half a million by year end, likely hundreds of thousands more in 2016 and beyond.

Thousands of others die or go missing. On August 27, hundreds were feared dead after two overcrowded vessels capsized off Libya’s coast. Dozens of Syrian refugees were found suffocated to death in a truck parked on an Austrian highway – their bodies in a state of decomposition. Other similar horror stories repeat with disturbing regularity.

Crisis resolution is obvious – not considered nor will it be. End US orchestrated and led imperial wars. The UN Charter’s pledge “to save succeeding generations from the scourge of war, which twice in our lifetime has brought untold sorrow to mankind” proved empty rhetoric.

America’s record is unparalleled – endless wars at home and/or abroad every year in its history, begun long before the republic’s inception.

The current US presidential race features an array of imperial warriors – not a peace and stability advocate in the bunch.

Hillary Clinton is a reckless war goddess. Donald Trump wants “the strongest military that we’ve ever had.” Other Republican aspirants support increased defense spending and militarism. Bernie Sanders supports all Obama wars. They exceed the worst of George Bush.

No matter who becomes president in 2017, America’s killing machine will keep raging – ravaging and destroying one country after another, causing an endless human flood of refugees, risking the unthinkable if Russia or China are challenged belligerently.